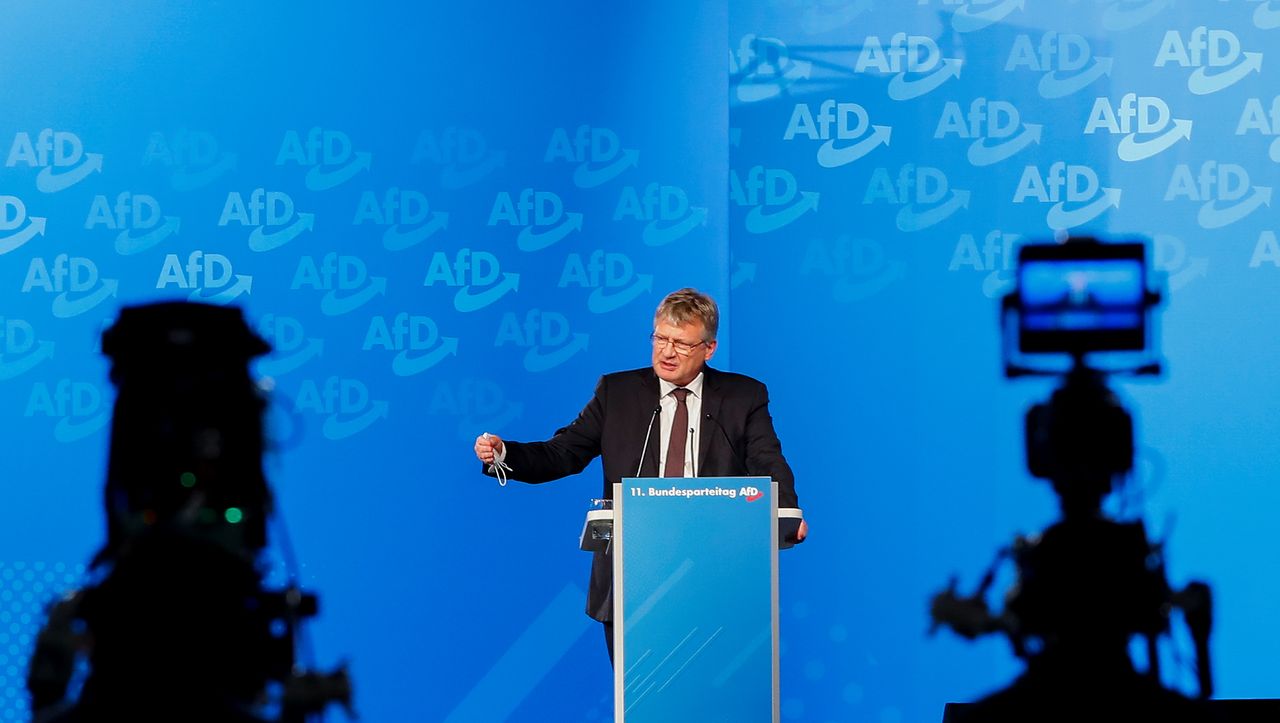 Jörg Meuthen speaks. What he says seems like an impact in the exhibition hall in Kalkar. The co-party leader accounts for the appearance of his party – more thoroughly than almost any AfD politician before.

It is a surprising surcharge at the beginning of the two-day party congress at which a pension concept is actually supposed to be adopted.

On the board seats, the TV cameras show the AfD honorary chairman Alexander Gauland. Gauland once headed the AfD together with Meuthen, today they have fallen out since then Jörg Meuthen in May ensured that the Brandenburg AfD politician and right wing winger Andreas Kalbitz lost his membership by a board decision.

This Saturday, Gauland can be seen on the TV monitor, clapping only occasionally during Meuthen’s speech. Because what the co-party leader says is a kind of general accounting with his own party. The AfD has reached a point “at which it no longer automatically goes up and electoral success follows electoral success.”

It is the intro to a gig that many did not expect.

Because Meuthen goes to court with almost everything with which the AfD has made a name for itself in the past few weeks: with the criticism of the Corona policy, with the admission of right-wing bloggers into the Bundestag through two AfD members of the Bundestag, with the contacts to » Lateral thinkers “movement of the critics of the corona protective measures.

His criticism, although he does not name him, is also aimed at Gauland, who repeatedly refers to Chancellor Otto von Bismarck in his speeches in the Bundestag and in the party and recently spoke of the “Corona dictatorship” in the Bundestag. It is not enough to assure each other that you are conservative. “Some of our ranks seem to understand it as going back to yesterday, feel at home with Bismarck and adore this historical figure enthusiastically,” says Meuthen.

These AfD politicians propagated a kind of »Bismarck 21« as a solution to today’s economic and socio-political problems in the country. With the recipes from »the day before yesterday, the political solutions of tomorrow cannot be designed, especially not in view of the tremendous dynamism of a living and working world that is digitizing at breathtaking speed,« shouts Meuthen. The AfD is “not a backward-looking party and it must not be one”.

So it goes on in Meuthen’s speech. Meuthen becomes clear about the appearances of bloggers from the right-wing scene who recently harassed other parliamentarians in the Bundestag before the vote on the amended Infection Protection Act and who had access through two AfD members of the Bundestag – whose behavior was subsequently disapproved by the parliamentary group.

“We’d rather leave those out in the rain,” he says, “who are only too happy to scramble and roll around, or invite others to do so, as they did last week in the Bundestag, because they like themselves into the role of provocateurs like pubescent schoolboys, especially the wanting to show their own manageable bubble what great guys they are. “

Such people should be denied the “hypocritically demanded unity”, because of such incidents “multitudes of people” no longer voted for the AfD. “We will not achieve more success by appearing more and more aggressive, more and more coarse, more and more uninhibited,” Meuthen wrote of the party in the studbook.

The AfD, according to Meuthen, needs discipline. This includes “impeccable behavior of all functionaries and also ordinary members, from parliament to street stalls.” Finally, Meuthen criticizes the rhetoric in its own ranks. Meuthen asks whether it is really wise to speak of a “Corona dictatorship” in parliament, indirectly also targeting Gauland. “We don’t live in a dictatorship, otherwise we would hardly be able to hold this party conference today,” Meuthen replied.

Meuthen rhetorically questions those AfD politicians who recently participated in the demonstrations by Corona critics and – whether it would be wise if “all sorts of AfD functionaries without any critical distance join forces with the so-called” lateral thinkers “movement without criticism,” Deniers were seen. In addition to completely normal concerned citizens, there were also “not very few contemporaries whose bizarre, sometimes openly system-hostile positions and views suggest that tragically, straight-ahead thinking doesn’t even work properly for them, let alone genuine lateral thinking.”

At that moment there is applause, but among the delegates you can also see delegates on the TV monitor, keeping their hands down and shaking their heads. Meuthen goes even further, basically takes on the speeches of AfD members of the Bundestag who compared the Infection Protection Act with the Enabling Act of the Hitler government of 1933, which opened the doors to the self-disempowerment of parliament and the Nazi dictatorship.

Would it be wise, Meuthen asks the delegates, “to deal with the deliberate use of the term Enabling Act in connection with the change in the Infection Protection Act, which is of course harshly criticized, and thus deliberately arouse associations with the Nazi era and Hitler’s rise to power in 1933?”

Shouldn’t, asks Meuthen, such implicit comparisons in view of “the generally known monstrosity and, in this dimension, also the singularity of Nazi barbarism, shouldn’t be forbidden, because they implicitly trivialize the horrific crimes of that dark time?”

Meuthen paints a gloomy scenario for his party. “Either we get the curve here, and very determined and very soon, or we as a party will experience a grandiose failure in by no means in the distant future,” he called into the exhibition hall.

After Meuthen’s speech, Gauland was asked about the speech on the Phoenix TV station. At first he calls it “mixed”, it contained good parts, but there are also “parts that I consider divisive”. Gauland defends himself against his attacks on the parliamentary group, Meuthen does not have to interfere. “I bow too much to the protection of the constitution,” said Gauland.

The fact that Meuthen had criticized the choice of words of the “Corona dictatorship” and thus Gauland, who had used this term in the Bundestag, is taken up by the parliamentary group leader. One could argue about it, but it was “ridiculous” if, by using the term, one assumed that he was calling into question the constitutional order. There is a risk of fighting within the party in the camps. Gauland also turns against what from his point of view is too sweeping criticism of the “lateral thinkers” movement.

He would have expected an appeal for the unity of the AfD. The speech “offended many people in the hall.” Meuthen’s speech sounded as if “one group had to prevail over the other,” which he believed was wrong.

Weidel breaks off interview with Phoenix

Co-parliamentary group leader Alice Weidel, also an opponent of Meuthen, then said to Phoenix that the speech should “not be hung too high”, the Kalbitz issue had been decided by the board of directors. When Weidel is confronted by the moderator with an external quote on the social policy of the AfD during the interview, stating that it is »social-nationalist«, Weidel finally breaks off the conversation – and leaves. She appreciates the moderator, but she considers the question to be “dubious”, she insinuates that the moderator said he had said “National Socialist”, which the latter in turn denies. Have a »nice day«, says Weidel and leaves the hall. It’s not the first time the co-group leader cancels a TV appearance.

Unrest among the delegates

When Meuthen had finished his speech, a delegate was seen shouting angrily, walking through the rows without a mask and evidently leaving the room. The tension could also be seen elsewhere. The Baden-Württemberg AfD politician Dubravko Mandic, who is far to the right, applied to exclude the media from the hall – because of the photos of some delegates who were not wearing masks and the associated negative images in the media. But the application was rejected by a large majority. Mandic also belongs to a group of applicants who want to reprimand Meuthen – indirectly because of the measures against Kalbitz (Read details here).

The party congress in Kalkar takes place under the stricter hygiene regulations, the delegates – if they cannot produce a medical certificate – also have to wear the masks on site, file a lawsuit the AfD, however, was on Friday from the Higher Administrative Court Münster has been rejected. Employees of the Kalkar Ordnungsamt check compliance with the regulations on site; anyone who does not adhere to them must leave the exhibition hall.

By early noon, the AfD had counted 507 of the expected 600 delegates.

Editor’s note: Because of the corona situation, the SPIEGEL reporter is not following the party congress on site, but in front of the TV screen and in the live stream.