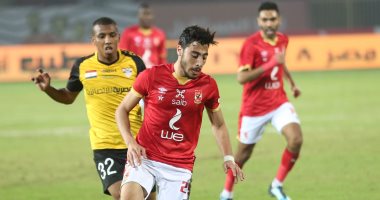 Akram Tawfiq, Al-Ahly club player, succeeded in filling the gap in the right front of his club in the two matches before the final of the African Champions League against Esperance of Tunisia, after the absence of Mohamed Hani, the right back, due to injury.

Akram Tawfik presented a very distinguished level in the right front that brought to mind the level of Ahmed Fathi, the former Al-Ahly star and the current Pyramids, which made Al-Ahly people sing of manhood and the performance of Akram Tawfiq.

Akram Tawfik’s brilliance comes in the right front, while Hossam Al-Badri, the technical director of the Egyptian national team, recently announced that he is suffering from a crisis in some positions in the team, especially the right and left front, which may prompt Al-Badri to think about relying on Akram Tawfik in the right front during The upcoming 2022 World Cup qualifiers period.

Al-Ahly club hit a date in the final of the African Champions League against the South African Kaizer Chiefs, who qualified for the final match for the first time in its history. A goal without a response and a goalless draw in the return match.

The 2021 CAF Champions League final will be held on July 17, at the Mohammed V complex in the Moroccan capital, Casablanca.

This is the third time that Al-Ahly faces a competitor from South Africa in the African final. In the 2001 edition, Al-Ahly met with the South African Sundowns in the Champions League final, where the two teams tied in the first leg in South Africa with a score of 1-1, while Al-Ahly won the match Return to Cairo 3-0 to win the title.

In the 2013 edition, Al-Ahly met with Orlando Pirates of South Africa, where the two teams tied 1-1 in the first leg in South Africa, while Al-Ahly won the return match 2-0 to win the title as well.

The appearance Al Ahly In the Champions League final for the fourth time in the last 5 years, after he recorded his presence in the 2017, 2018 and 2020 editions, and in the current edition in search of enhancing his record in the number of title wins.