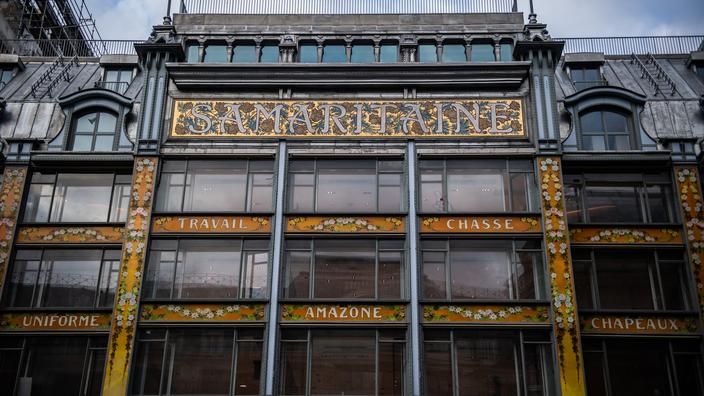 Jewels of Art Nouveau and Art Deco, the four buildings have undergone a major restructuring. The site will have cost 750 million to the owner, LVMH.

Closed since 2005, La Samaritaine reopens its doors on June 19, bringing together under its glass roof a department store, a luxury hotel, offices, social housing and a nursery. In all, the site will have cost 750 million to its owner, LVMH. La Samaritaine had been closed sixteen years ago for security reasons, linked to its dilapidation. The famous store on rue de Rivoli in Paris was due to reopen in 2020 for its 150th anniversary. But the pandemic has further delayed the work carried out by LVMH, majority shareholder of Samaritaine since 2001.

LVMH began in 2005 to undertake restoration work on the building located along the Seine near the Pont Neuf, in the very center of the capital. He had to wait until 2015 to see his building permit definitively validated. The three previous years, from 2012 to 2015, the work had been suspended by a series of appeals from heritage preservation associations challenging in particular the creation of an all-glass facade, on the rue de Rivoli side.

«It took five years to convince the mayor of Paris, five years to obtain the permit and five years of colossal work. We didn’t think it would last fifteen years, but it was worth it“, Underlined in 2019 Jean-Jacques Guiony, CFO of LVMH and CEO of the iconic department store born in 1870 in the heart of Paris.

Due to the pandemic, we had to wait another year before the opening of the 20,000 m² store (against some 30,000 m² when it closed), initially scheduled for 2020, on the occasion of the 150th anniversary of La Samaritaine. The building also houses a five-star Cheval Blanc hotel (brand owned by LVMH) with 72 rooms with a plunging view of the Seine, the reopening date of which has not been communicated and which will notably offer a 1,000 m² suite with a private swimming pool on the eighth floor. floor.

The establishment will also include four restaurants, including a gourmet one run by Michelin-starred chef Arnaud Donckele, named chef of the year by Gault and Millau in its 2020 edition. The project includes 15,000 m² of offices, a neighborhood nursery with 80 beds. and 97 social housing units managed by France Habitat.

Jewels of Art Nouveau and Art Deco, the four buildings – including one listed as a historic monument – have undergone a major restructuring which also had to respect and enhance the period elements: mosaics, enamels, glass roofs or even guard. wrought iron body. The spaces were “magnified by the firm Sanaa but also Hubert de Malherbe, Ciguë or Yabu Pushelberg“, Said an LVMH statement sent to AFP.

In 2005, when it closed – for work originally supposed to last six years – La Samaritaine employed 734 people, almost all of whom were reclassified or benefited from measures provided for by the Employment Protection Plan ( PSE). When announcing the reopening in 2019, LVMH had indicated that “in total, more than 1,500 jobs will be created“, Including 800 for the department store, and that”with offices, more than 2,400 direct jobs will be made permanent on site».