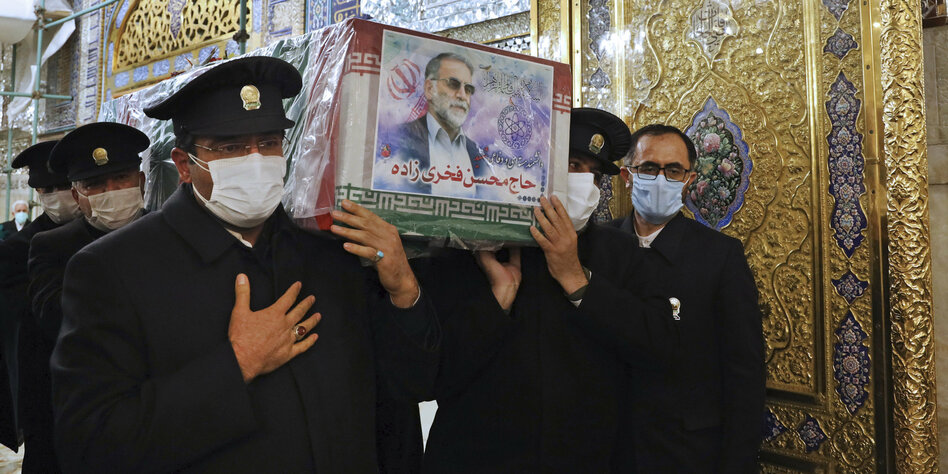 After the murder of the head of its nuclear weapons program, the Iranian leadership is reluctant. Revenge would be in the interests of the attacker.

KAIRO taz | After the attack on the Iranian nuclear physicist Mohsen Fachrisadeh, Iran’s leadership is looking for a suitable reaction. Fachrisadeh was killed in a suburb of Tehran on Friday. According to the Iranian state television, a bomb placed on a truck exploded just as Fachrisadeh’s car drove by. Armed men then came out of hiding and shot the car, reported the semi-official Tasnim news agency.

So far, no one has officially committed to the murder. Iran accused the US and Israel of being responsible for the attack. Fachrisadeh was considered an important head in the Iranian nuclear program. He is said to have headed the Amad (Hope) military nuclear program in the early 2000s. The program was discontinued in 2003 and the UN Security Council imposed sanctions on Fachrisadeh due to its activities.

According to the US State Department, the murdered man was most recently headed the Iranian Defense Innovation and Research Organization and unofficially continued the program. For Iran, his death means not only the loss of important nuclear knowledge, but also, due to the great public interest, considerable pressure to take military revenge.

The attack has been seen in a series of explosions and attacks on Iranian nuclear enrichment facilities, missile sites, petrochemical centers and power plants this summer, for which Iran’s leadership also blames the US and Israel. In January, a US drone attack also killed the Iranian General Kassem Soleimani. At the time, Iran responded with rocket attacks on US positions in Iraq.

A retaliatory strike would be a reason for Trump to attack

If the Iranian leadership responds with a retaliatory strike this time, it would be a justification for President Trump to officially attack nuclear centers. Iran’s President Hassan Ruhani responded accordingly cautiously. He said the Iranian nation will respond to Mohsen Fachrisadeh’s death “in due course”. On the other hand, the supreme religious leader Ayatollah Ali Khamenei called on Saturday for a “decisive punishment” of the perpetrators and the pullers.

But Ruhani and the moderate forces have to keep a cool head – not least so that the murder of Fachrisadeh does not stand in the way of rapprochement with the new US administration under Joe Biden. Because President Ruhani has high hopes for Biden and his administration: he wants to negotiate with her about an end to the sanctions. This should improve the miserable economic situation in the country. The attack certainly has an impact on possible recurring negotiations for a new nuclear deal with Iran. The deal, reached in 2015, had been negotiated for 12 years. It stipulated that Iran would restrict its nuclear activities and allow controls by the United Nations, the European Union and the USA – at that time under Barack Obama. In return, sanctions were lifted and more trading allowed. But in 2018 Trump overturned the deal.

The attack may now provoke a military confrontation before Trump’s term ends on January 20. Because with Biden’s election victory, Trump’s strategy of strengthening Israel and reducing Iranian influence is at stake. Security experts are therefore discussing whether the US and Israel are jointly behind the murder. After his election defeat, Trump asked the US media about options for military action against Iran.

The New York Times reported that Israel was responsible for the attack, citing three unnamed US intelligence officials. Israel’s Cabinet Minister Tzachi Hanegbi replied that he had “no idea” who was behind the murder. “I urge the Israeli leadership to remain silent,” said the former head of the Directorate for Military Intelligence of the Israel Defense Forces, Aluf Yadlin, at a press conference in Jerusalem. “Any further information that would help Iran decide to retaliate against Israel should be avoided.”

Because President Ruhani wants to avoid an escalation before Biden takes office, Iran’s government spokesman Ali Rabiei said they would “not fall into the trap” of putting diplomatic efforts on hold. There were also attacks on Iranian nuclear physicists during the nuclear talks between 2005 and 2015, but the negotiations continued, he told the Iranian news portal Alef.

Although President Ruhani is considered moderate, his term of office ends in June 2021. So there is not much time to strengthen diplomatic relations with the USA during this crisis.