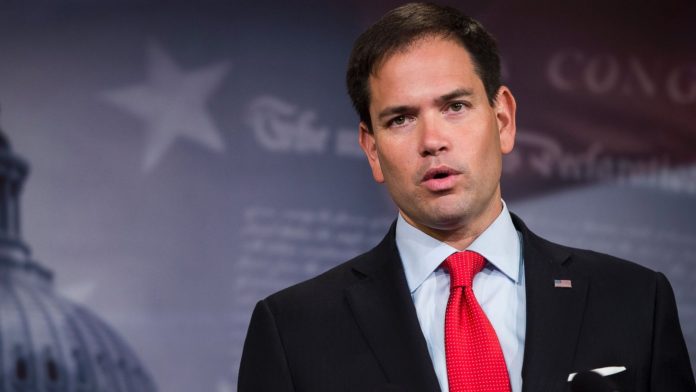 Marco Rubio, Republican senator from the state of Florida, criticized the government of Joe Biden accusing members of his cabinet of being “sympathizers” of the leftist regimes in Cuba, Nicaragua and Venezuela. And he predicted that after the intermediate elections, known as “mid-term”, the US president will recognize Nicolás Maduro as president of Venezuela.

The parliamentarian assured, outside the White House, that former President Donald Trump was taking measures to stop authoritarian leftist governments in Latin America. And he stated: “In the last two years this new White House has done absolutely nothing. It’s not a priority for them.”

He expressed dissatisfaction that the Biden administration has sent representatives to meet with officials from the governments of Maduro and Miguel Díaz-Canel in Cuba.

“And they have done some things but they don’t talk much about Nicaragua,” he added.

“Inside that White House there are people working in the team in charge of the region who are sympathetic to these regimes. The person in charge of the Cuba issue in the National Security Council is a woman who only two years ago was coordinating trips to Cuba hand in hand with the regime,” she said.

Rubio also assured that after the November legislative elections in the United States, Biden will recognize Maduro.

“What I am telling you now is that after these November elections what you are going to see is that this White House is going to find a way to reopen ties with the regime in Cuba, because that is what the leftist base is asking for. And we are going to see what they are going to say that the new government of Colombia is looking for the United States to settle with Maduro,” Rubio said.

He insisted that the Biden government will argue that since Colombia recognizes Maduro as Venezuela’s president, the United States must also do so. “That’s what they’re going to do after November. Remember that I told you today, “said the legislator.

“For us, these issues will always be a priority and we will continue to give priority to the cause of freedom in Cuba, Venezuela and Nicaragua,” Rubio said.

The senator’s remarks come hours after the uproar caused by the practice of sending migrants arriving in states governed by Republicans to other parts of the United States.

About 50 Venezuelan migrants were sent this Wednesday by the Governor of Florida, Ron DeSantis, to the island of Martha’s Vineyard, in Massachusetts. Although DeSantis – who is considered a possible Republican opponent of Trump – organized the transport, the planes arrived on the island from Texas and not from Florida. That according to the newspaper MV Times and a local politician.

This same Thursday, Abbott dispatched two buses with a hundred Venezuelans near the residence of Vice President Kamala Harris.

“Vice President Harris claims our border is ‘secure’ and denies there is a crisis. We are sending migrants to her backyard to urge the Biden administration to do its job and secure the border.” This was tweeted by the governor of Texas.

For his part, a member of the Florida governor’s team ironically commented on the arrival of Venezuelan migrants in Massachusetts.

“Residents of Martha’s Vineyard should be excited. Illegal immigrants will make the city more diverse, which is a strength. No?” Christina Pushaw of DeSantis’ communications team wrote on Twitter on Wednesday.

All of that has prompted accusations from Democrats that Republicans are using the sensitive issue of immigration as a campaign tactic for the Nov. 8 midterm elections.

In these elections, the continuity of the presidency is not disputed, but they are usually considered a kind of presidential referendum or plebiscite based on the results obtained in 435 seats in the House of Representatives and 34 of the 100 in the Senate. 36 governorships are also disputed.