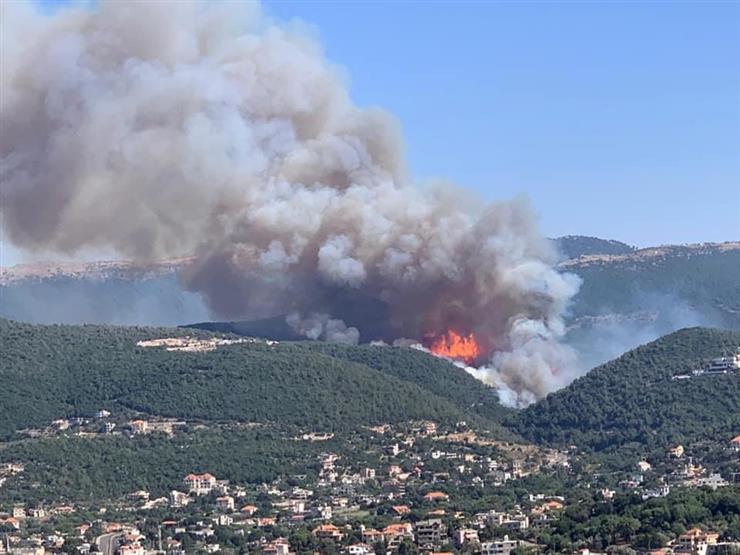 Seasonal fires in Lebanon returned to the top of the scene, this time from “Qobayat” in the mountainous Akkar region in the north of the country, known for its vast green forested areas and pine forests, where huge fires have turned the color of the sky to orange, and destroyed large areas of trees, killing one person so far. .

Since Wednesday afternoon, the fires that spread from the forests and woods to besiege the people in residential places broke out in separate places at the same time, as the mayor of the town of Al-Qubayyat, Youssef Nader, said. Because of the wind speed, the fire spread in the Akkar region over an area of ​​more than 11 kilometers, according to the National News Agency.

For the second day in a row, the Civil Defense and the Lebanese army are trying to put out the massive fires, with the help of volunteers and the people of the neighboring regions and villages, at a time when the fires broke out again, Thursday, amid the people’s appeal to the Lebanese state with all its devices to work quickly to reduce the size of the disaster, according to the Lebanese army. .

The fires erupted renewed in the Al-Ruwaimah and Al-Bustan areas and spread to the vicinity of the houses in the forest of the Al-Qaltabah – Al-Qobayat area, and the army units, with the support of the helicopters, worked to surround and extinguish them, with the participation of civil defense elements and the people.#Lebanese army #LebaneseArmy pic.twitter.com/E2VioeDLYp

An eyewitness told AFP that the fire was tens of meters from his village of Akrom, forcing his family to evacuate their house as thick clouds of smoke formed that obscured the view.

“The scene on the ground is frightening,” Minister of Agriculture in the Lebanese caretaker government, Abbas Mortada, told AFP.

He added, “The fire is very large, and destroyed large areas of green land and threatens residential homes.”

The Lebanese minister expressed his hope for the assistance of friendly countries; “We don’t have the ability to put out the fire,” he says.

And the National News Agency reported, on Thursday, that the Lebanese authorities officially contacted the Cypriot authorities to send helicopters to help put out the fires, under the directives of Lebanese President Michel Aoun and Lebanese caretaker Prime Minister Hassan Diab.

The Lebanese president followed up on the development of the fires that broke out in Akkar, especially Qobayat and the town of Benno.

Aoun asked the Army Command and the Civil Defense in Lebanon to “make every effort to put out the fires in Akkar”, to prevent them from spreading to homes and to help the people.

The Palestinian Civil Defense also went to the Kobayat area in Akkar to contribute to putting out the fire.

The Palestinian Civil Defense “Badawi Camp Regiment” with all its crews heading towards #akkar To contribute to extinguishing the #Al-Qubayyat_fire pic.twitter.com/qvTBeJWQcu

So far, a 15-year-old Lebanese boy, Amin Melhem, who volunteered to put out huge fires in the town of Kafrton in Akkar, has been killed.

The Lebanese boy died while trying to put out the burning fire to keep it away from his family’s property, after he fell on his head, and soon his soul overflowed as soon as he was taken to the hospital.

The General Directorate of Civil Defense in Lebanon said that the dead boy, who died on Wednesday night, was a resident of the Kobayyat area, who “rushed to the site of the fire in an attempt to put out the fire.”

Akkar’s unique forests in the Mediterranean region are burning. People’s livelihoods are burning. Our hearts are with the people in the towns: Qobayat – Andakt – Jabal Akrom – and their surroundings

The Lebanese Red Cross has dispatched 9 ambulance teams to provide first aid to those injured due to fires and thick smoke in the city of Qobayat.

There are 13 ambulances belonging to the Lebanese Red Cross centers stationed in 4 points: Al-Qaltabah, Al-Murgan, Oudin and Kafrtun. At least 17 people were taken to hospital, 25 others received field treatment, and others were evacuated from the fire areas.

Two Lebanese army helicopters managed to keep the flames away from the vicinity of the houses in the Marjan forests, above the town of Qobayat, after the flames spread very quickly to Wadi Oudin in the towns of “Andak” and “Kafrtun” in Mount Akrom. A number of citizens who were trapped in their cars by the fire were evacuated.

rafts #Lebanese army Its members have been working since yesterday to put out the massive fires that broke out in Akkar and Hermel.#LebaneseArmy pic.twitter.com/IXOFj4iAh2

The situation is ‘very dangerous’

The former head of the Jabal Akrom Municipalities Union, Ali Esber, described the situation as very dangerous, after the fires spread from “Kfartun” and “Akrom” to the Syrian village of “Akom”, all the way to “Hermel” in the Bekaa Governorate, according to the Lebanese newspaper “Al-Akhbar”.

The Syrian Civil Defense confirmed that the fire spread to “Akoum” in the Qusair countryside on the border between Syria and Lebanon, which prompted the Syrian authorities to evacuate the village of its residents, according to the local “Sham FM” radio.

A Syrian helicopter participated in putting out the fire at the Lebanese-Syrian border, and teams from the Syrian Civil Defense intervened with their vehicles in this area to put out the fire.

Fires abound annually during this period of the summer in the neighboring Lebanese and Syrian forests and forests. In the summers of the past two years, huge fires broke out that spread over large areas in separate areas of the forests of the two countries.

The fire that broke out a while ago inside the Qataba forests in Qobayat #akkar with the Syrian border pic.twitter.com/8mAv95oNxk

Doubts and calls for investigation

In the meantime, there are doubts and questions inside Lebanon about the secret of the outbreak of these fires, raising the possibility that they were an “actual act.”

Andaqt Mayor Omar Saud told the Lebanese newspaper, Al-Akhbar, that “the fire was provoked and there were parties who set fire to more than one place, and at the time we were working to put it out,” without mentioning who those parties were or naming them.

Massoud called on the Environmental Prosecutor in the North, Ghassan Bassil, to open an immediate investigation into the “potentially provoked fires”, and to assign this file to the Information Branch “because of its techniques and expertise.”

I will try to transfer the picture from Kobayat in one minute… and you have the comment.. #Lebanon_burning pic.twitter.com/jIQhFLlUIP

The Lebanese official noted that the damages are very severe in the “Wadi Oudin” archaeological forest reserve, pointing out that the damage is not less than 3 million square meters.

At the same time, Antoine Daher, head of the Qobayat Environment Council, confirmed in a phone call to the Lebanese newspaper, An-Nahar, that “the size of the fire raises suspicion and suspicion, as we estimated its area to be more than 7 kilometers in length,” calling for an investigation to find out its causes.

So far, 60 percent of the fires in Al-Qaybat have been controlled, while it cannot be expected when it will be completely extinguished, according to Al-Nahar.

These fires recall the October 2019 fires, which were described as the “worst in decades”, which devoured large areas of forest in Lebanon and trapped civilians in their homes.

Lebanese officials attributed these fires to high temperatures and hot winds, which helped set fires to some trees and green spaces, amid the inability of the authorities that received support from several countries to put them out, which the Lebanese considered – at the time – another evidence of the authorities’ neglect and incompetence.

These fires provoked widespread anger and even constituted one of the reasons behind the unprecedented popular protests that Lebanon witnessed on October 17, 2019 against the political class.

Cyprus, along with other countries including Greece and Jordan, took part in putting out those fires as well.