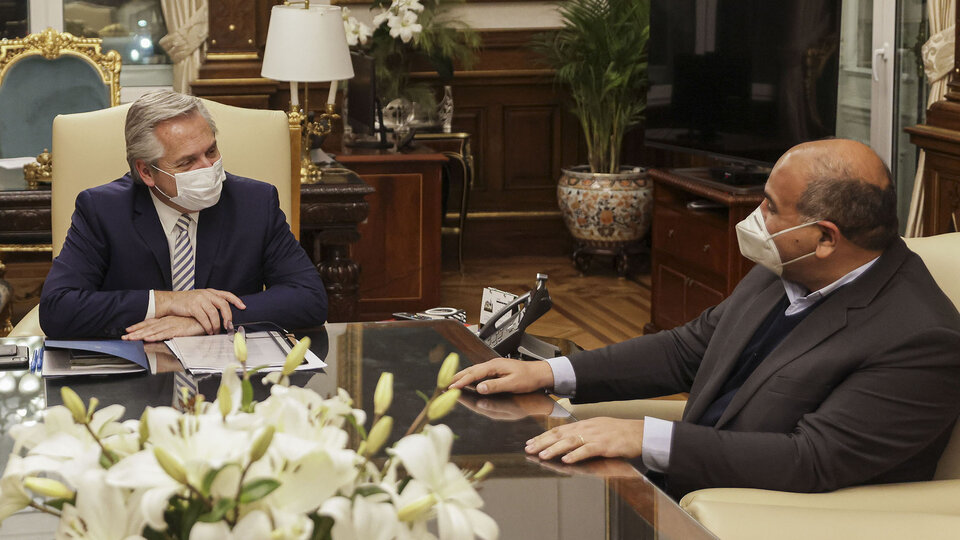 President Alberto Fernández announced last night the new ministers who will be part of the national cabinet. Juan Manzur, the governor of Tucumán, will be the new chief of ministers in replacement of Santiago Cafiero, who will leave his position and will assume as head of the Ministry of Foreign Affairs and Worship, replacing Felipe Solá. Another novelty is that Aníbal Fernández returns to a ministerial position by replacing Sabina Frederic in the Security portfolio. Another with experience as a minister who returns to a cabinet is Julián Domínguez who will assume as head of the Ministry of Agriculture, Livestock and Fisheries, replacing Luis Basterra. In the Education portfolio will be Jaime Perzyck, instead of Nicolás Trotta. Meanwhile, in the Ministry of Science, Technology and Innovation, Roberto Salvarezza leaves and Daniel Filmus enters. In addition to the modification in these six ministries, the president will have a new secretary of Communication and Press. This is Juan Ross, who will occupy the place left by Juan Pablo Biondi, a person of extreme confidence in the President, who had resigned yesterday afternoon. The other portfolios will continue with the current ministers. Today the President will relaunch his government in the province of La Rioja, where he will participate in an act with all the governors of the Frente de Todos. The inauguration ceremony of the new holders will be on Monday at 4:00 p.m. at Casa Rosada.

At 10:15 p.m., while the noise of the presidential helicopter taking off was heard, two members of the president’s communication team approached the journalists’ room of Casa Rosada and, in front of the few accredited persons who still remained at that time, they began to dictate the list of new ministers. Minutes later the news would explode in all the media. They indicated that “the President highlighted and thanked the work done by the outgoing ministers and received the commitment in this new stage of those who were appointed.” Of the ministers who had made their resignation available on Wednesday, unleashing the intern in the ruling party, only that of Salvarezza was accepted, who will continue to be part of the government, now as president of Y-TEC, the research and development company for the YPF’s energy industry. Not so that of the Minister of the Interior, Eduardo Wado de Pedro, who will continue to be part of the cabinet, as well as the Minister of Economy, Martín Guzmán and the Minister of Industry, Matías Kulfas, who had been at the center of the storm during the last days.

From Kirchnerism they assured Page 12 that they are very satisfied with the changes and that they do not expect others. They consider the episode closed and hope that from now on the government will take the necessary economic measures to solve society’s problems. They consider that the new cabinet has a large political volume and greater management capacity, with leaders of “great weight and trajectory” such as Manzur, Aníbal Fernández, and others.

With the appointment of Manzur, the question of what will happen in Tucumán with the deputy governor, Osvaldo Jaldo, faced with the provincial president, remains to be resolved. Until last night it was speculated that Jaldo would leave the province to access a national position. Ross, the new Secretary of Communication and Presa, meanwhile, until yesterday he served as national director of Official Advertising within the Chief of Cabinet, a position that he had also held for 10 years in the governments of Néstor and Cristina Kirchner. Perzick, the new Minister of Education, held the position of Secretary for University Policies in the Ministry and was one of the officials who had made his resignation available to Fernández on Wednesday. He was also rector of the University of Hurlingham – a position in which he is currently on leave. Aníbal Fernández, the new Minister of Security, was one of the names that had been in dance since Wednesday, when he unexpectedly visited Casa Rosada and stated that “if the President is going to make the decision to make changes, I would do so before March 14. ”.

The day had been one of great uncertainty in the corridors of the Government House as the government decided against the clock what the changes would be, after an intense week of internal debates after Sunday’s electoral defeat. What the President had said to those closest to him on Thursday about the fact that “it is time to do” this Friday had begun to be implemented with the resignation of his spokesperson. After publishing the letter, Biondi spoke with journalists and pointed out that, unlike other officials, he had tendered his resignation, signed and by hand, to the president. When asked if he had spoken with the vice president, Cristina Fernández de Kirchner replied: “Who?”

The President began the day at the presidential Quinta de Olivos, where he received the governor of Chaco, Jorge Capitanich. There he would have offered him a place in the cabinet, which was rejected by what the governor expressed in a statement published hours later where he stressed that “in 2019, the people of Chaco gave us a vote of confidence, and the possibility of working tirelessly, day by day to transform their lives forever. ” After 12:30, Fernández arrived by helicopter at Casa Rosada accompanied by the Secretary General of the Presidency, Julio Vitobello, and the Secretary for Strategic Affairs, Gustavo Béliz. Half an hour later the Chief of Staff arrived and minutes later the Legal and Technical Secretary, Vilma Ibarra. The president had lunch with three officials who are also his close friends: Vitobello, Beliz and the Argentine ambassador to Uruguay, Alberto Iribarne.

During the afternoon there were many entrances and exits through the Hall of Busts. Cafiero and the president of the Chamber of Deputies, Sergio Massa, went to the Ministry of Economy where there were meetings with Martín Guzmán, and with the Minister of Transportation, Alexis Guerrera. De Pedro, meanwhile, was in Congress meeting with CFK. In all the meetings that took place on the day, as explained by the ministers’ advisers, “they were naming names and seeking consensus.”

The Governor of La Rioja, Ricardo Quintela, who hours before had met with the Minister of Social Development, Juan Zabaleta, also entered the Government House. In the meeting with the president, as confirmed by Fernández to this newspaper, the president and Quintela agreed to the meeting with governors that the President will attend together with members of his cabinet. There he will obtain an endorsement of the governors and will carry out a relaunch of the space. One of those confirmed could be Zabaleta since, after the meeting, Quintela pointed out that they had met “to discuss different issues and agree to visit our province to sign important agreements.” Eleven governors will travel to La Rioja and four will do so virtually in order to give political support to President Alberto Fernández.