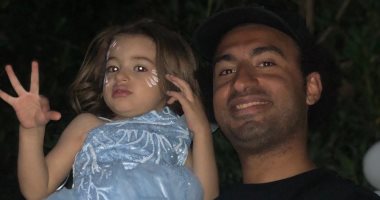 The artist, Ali Rabie, celebrated the birthday of his daughter Malika in a family party among relatives and friends, and published several photos with her on his personal account on the Instagram photo and video exchange site, and commented: Happy birthday Malika .. the best father is this or what.

Ali Rabie and his daughter

Ali Rabie and his daughter Malika

Ali his Lord and his daughter Malika

Ali his lord and his daughter Malika

The artist, Ali Rabie, said, during his recent hosting with the media, Amr Al-Leithi, on the “One of the People” program on Al-Hayat channel, that he gave his life to art and does not think about marriage, nor does he think about making a drama far from comedy; Because the audience is anxious about him to present something comic, and about the most difficult scene he presented in the series “The Best Father,” he said: The scene of my confession that I am not the father of the child was covered up is the most difficult, and about his newness he said: I am preparing for a horror comedy movie during the coming period.

The series “The Best Father”, written by Ahmed Mohi and Mohamed Mohammadi and directed by Moataz Al-Tuni, and its events revolve in 15 episodes, and starring: Ali Rabie, Ahmed Fathi, Hajar Ahmed, Jihan Khalil, Murad Makram, Hala Fakher, Mustafa Abu Saree, Sami Maghawry and a number of others. One of the artists, and its events revolve within a social comedy framework, and it is shown in 15 episodes.

The series “The Best Father” revolves around the confused “Ali Rabie”, a failed thief, who learns about a new competition being held in a hotel under the title (The Best Father), and decides to draw up a plan in order to steal the prize money, and he uses a child beggar in the process.