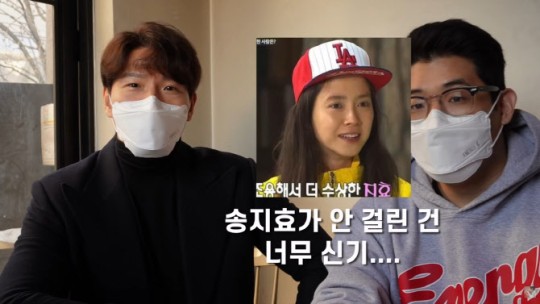 Singer Kim Jong-kook said it was strange that actor Song Ji-hyo, who was not vaccinated, was not confirmed with the aftermath of the novel coronavirus infection (Corona 19).

On the 24th, Kim Jong-kook reported the testimonial of Corona 19 in a video uploaded to his YouTube channel ‘Jim Jong-guk’. He even finished his second dose of vaccination, but reported a breakthrough infection on the 10th.

Kim Jong-guk, who met the PD after the Corona 19 quarantine was lifted, said, “The virus at home seems to be the problem.” “I met once because of editing at home, but I got Corona. ” he was amazed.

In particular, Kim Jong-guk said, “All the Running Man members got it, but it’s so strange that Song Ji-hyo didn’t get it.” He said, “He didn’t even get the vaccine.

Also, “I had a group video call (with Running Man members) on the day I had symptoms, and we all had symptoms.” He said, “I thought it was a cold. In the end, I stabbed my kit deeply, but strangely two lines came out.” said.

Kim Jong-guk said, “I was in really good shape before I got Corona, but now my condition has not recovered.” “On the first day, my head hurt, and on the second day, my nose became cold and I was sweating. I was healed. I think I was not feeling well,” he recalled.

Then, he said, “After that, the nose blindness disappeared like a lie. At the same time, the smell disappeared. Still only about 10% came back. I continued to lose my hunger, so I ate six meals at a time.”

Kim Jong-kook was released from quarantine on the 17th, a week after he was confirmed with COVID-19 on the 10th. Ji Suk-jin, Haha, Yang Se-chan, and Jeon So-min, who were appearing on Running Man along with Kim Jong-guk, were also confirmed, and Running Man was in an emergency.

Among them, Song Ji-hyo was not vaccinated due to an allergy to Western medicine, but avoided being diagnosed with Corona 19.

In December of last year, Yoo Jae-suk, one of the Running Man performers, was also diagnosed with Corona 19. On the day of the recording of Running Man, Yoo Jae-suk confirmed a positive test in the self-diagnosis kit before getting out of the car, and it was reported that he was able to prevent the second spread by leaving the recording studio immediately.