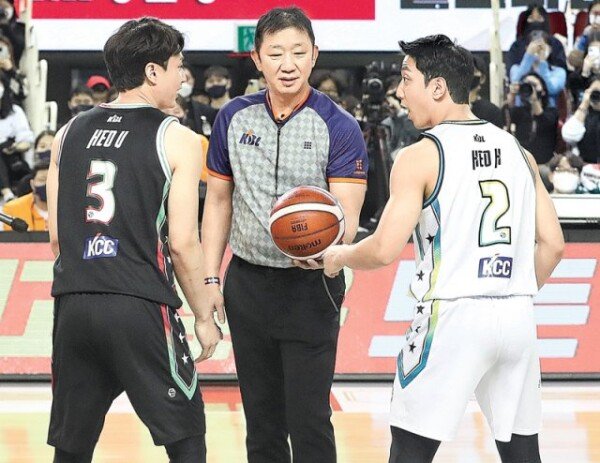 ‘Basketball President’ Heo Jae, former coach of the men’s basketball team, and his two sons shined in the professional basketball All-Star Game. Former coach Heo Heo prepares to throw a jump ball between his eldest son Heo Woong (left) and second Heo Hoon as a referee before the start of the first quarter during the 2021-2022 season professional basketball All-Star Game held at the Daegu Indoor Gymnasium on the 16th. Heo Woong and Heo Hoon are fighting over a seat. Daegu = News 1

It was perfect, except that I couldn’t shout out the names of the players I usually support. The spectators, who entered the stadium wearing masks after checking whether they had been vaccinated, watched every move the players enjoyed and performed, occasionally exhaling short sighs and bursting with laughter. Instead of shouting, a long round of applause followed.

The Daegu Indoor Stadium, where the All-Star Game was held, was filled with 3,300 fans from the first to the third floor. Ahead of the start of the 2021-2022 season, professional basketball has decided to open all spectator seats only to those who have completed vaccinations in accordance with the guidelines of the quarantine authorities. At the discretion of each club, 50% to 100% of the spectator seats are open. However, as social distancing guidelines are tightened due to the spread of COVID-19, the audience has never actually been full. On this day, the players also played in the stadium full of spectators for a long time.

The players did their best to give the fans unforgettable memories. The first thing that caught my eye were the families of Heo Woong (DB) and Heo Hoon (KT). The two brothers, who placed 1st and 2nd in the All-Star Game voting to form a team with their own names, stood at the half-line to play a jump ball before the start of the game. At this time, the person who made a surprise appearance as a daily referee and lifted the ball was the father of the two players, Heo Jae, former coach of the men’s basketball team.

While watching the referee for about 4 minutes until the first operational time in the first quarter was called, former coach Heo showed a strict attitude toward his two sons. He called a total of 3 calls: 1 foul to the first Heo Woong, the second Heo Hoon, and a traveling violation to Heo Hoon. Heo Hoon provoked laughter from the fans by raising his thumbs when the whistle was blew towards him and protesting violently when the whistle was blew at his brother. Afterwards, Lee Jung-hyeon (Orion), a rookie from Team Heo Hoon, tried to post up when Lee Seung-hyun, a senior member of Team Heo Woong’s team, blocked the front, making the audience laugh.

In the match, Team Heo Woong defeated Team Heo Hoon 120-117. Heo Hoon, who was defeated by his brother in the fan vote, recruited Lee Jeong-hyeon (KCC), who said he had never lost in the All-Star Game, and tried to turn the game around, but it ended in failure. Heo Hoon’s 3-point shot, which was thrown to equalize before the end of the game, also missed the rim. Heo Woong played an active part with the team’s highest score of 21 points that day, leading his team to victory, and earned 62 out of 71 valid votes, even winning the Most Valuable Player (MVP) in the All-Star Game. Heo Woong said, “It’s an honor to work with players I want to play. These players pushed me and I was able to receive a precious prize. It was a fun time with my father judging. Through today’s game, I also saw the potential for development of Korean basketball. I will work harder,” he said.

Hysterical screaming of Cinderella Soad Hosni.. in the most hot scene with Rushdi Abaza in a forbidden movie and the director did not care about her screaming and the hero continued his fun until the end..