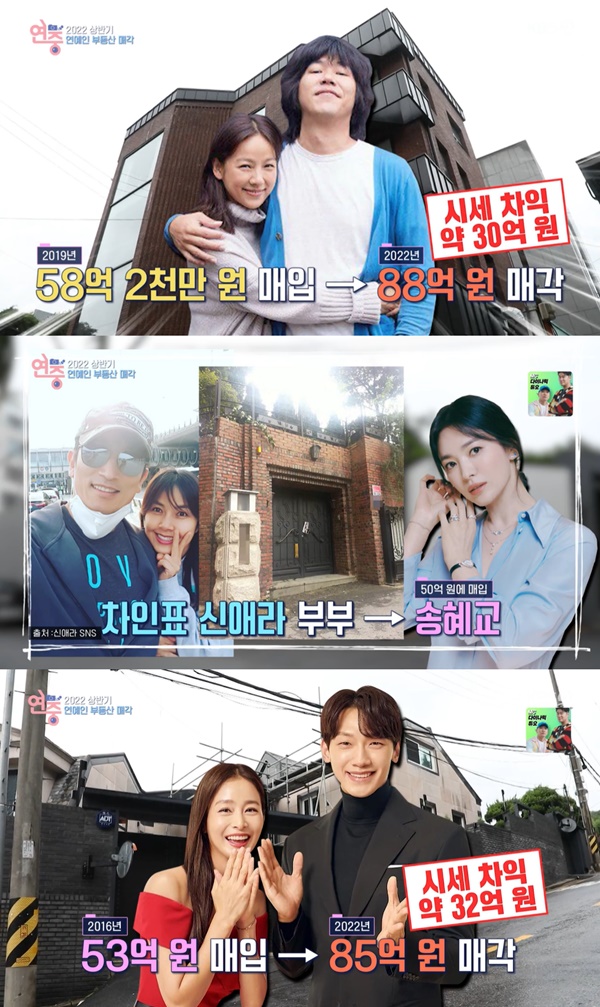 In the KBS2 entertainment program ‘Year-round Live’, which was broadcast on the 4th, the real estate stars who have recently been attracting attention for profit margins sounding ‘billion’ through investment in buildings were highlighted.

Hyo-ri Lee and Lee Sang-soon recently sold the building in Hannam-dong with a profit of about 3 billion won. Song Hye-kyo also sold her detached house after three years.

The building located in Samseong-dong is currently demolished, and the building was purchased by Hye-go Song in 2005 to the couple Cha In-pyo and Shin Ae-ra, leaving a profit of 2.9 billion won in 17 years.

Gangnam is known as the most preferred area for celebrity investors. Seo Taiji, a ‘real estate rich’ in the entertainment industry, sold the building in Nonhyeon-dong and earned about 30 billion won in market profit.

In addition, B-Kim Tae-hee became a hot topic by purchasing a building near Gangnam Station in Seoul for 92 billion won.

In addition, he sold a luxury house in Itaewon-dong for 8.5 billion won and made a profit of 3.2 billion won.

Recently, Jun-yeol Ryu bought the land in Yeoksam-dong under the name of a corporation and sold the newly built building earlier this year, embroiled in a real estate speculation controversy. He is estimating a profit margin of about 4 billion won.

On the other hand, KBS2’s entertainment program ‘Year-round Live’ is a program that provides the right information and direction by meeting many stars and cultural artists who lead Korea’s popular culture, sharing in-depth stories.