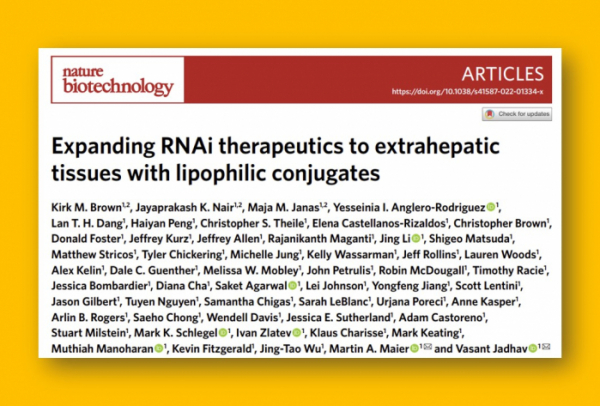 Published in Nature Biotechnology.. ‘APP C16 RNAi’ maintained a decrease in APP for more than 3 months in rat and primate models.. Reduced target genes in the eyes and lungs

Alnylam Pharmaceuticals has published a study on C16 RNAi technology that can be delivered to extra-hepatic tissues, particularly the central nervous system (CNS).

The research team confirmed the decrease in the expression of amyloid precursor protein (APP) in rat and primate (NHP) models by administering a drug that binds APP RNAi to C16 (Conjugation of 2′-O-hexadecyl). APP is a protein involved in the formation of amyloid beta, a causative gene of Alzheimer’s disease (AD). Currently, Allylam is conducting phase 1 clinical trial of APP C16 RNAi ‘APP-ALN’ for early onset AD (EOAD) indication.

According to the paper, the research team administered SOD1 C16 RNAi intrathecally (IT) to a rat model to determine whether C16 RNAi inhibits the target gene. As a result, SOD1 C16 RNAi was delivered to neurons, astrocytes, and microglia of the rat model brain, and at the highest dose of 0.9 mg, SOD1 mRNA in cerebrospinal fluid (CSF) decreased by more than 75%.

Allylam confirmed the effectiveness of the APP target C16 RNAi by administering it to a rat model and a primate model. For APP, the research team first administered 60 mg of APP C16 RNAi to the NHP and confirmed the result of up to 70% and 80% reduction in APP mRNA expression in the spinal cord and brain, respectively, 3 months later. There was no RNAi effect in the kidney or liver for 3 months.

Allylam confirmed that C16 RNAi was effectively delivered to the eyes and lungs, suppressing target gene expression. First, the research team administered transthyretin (TTR) C16 RNAi in doses of 3 μg, 30 μg, 100 μg, and 300 μg intravitreal IVT in primates (NHP). As a result, TTR protein decreased by 75% compared to the control group at all doses up to 28 days after administration of TTR C16 RNAi, and after 168 days of administration, TTR protein decreased by about 95% or more at 100 μg and 300 μg doses. On the other hand, when TTR RNAi without C16 was administered, there was no reduction effect compared to the control group.

In the mouse model administered intranasally with SOD1 C16 RNAi, the drug was effectively delivered to lung tissues such as bronchioles and alveoli, and SOD1 expression was significantly reduced. SOD1 levels decreased below 50% for 2 months after administration of SOD1 C16 RNAi at a dose of 10 mg/kg and maintained.

“Central nervous system (CNS) diseases are the most difficult to treat,” said Kevin Fitzgerald, CSO, Alaylam. The results are encouraging,” he said. “The CNS delivery platform works for a long time and can be applied as an intrathecal administration method that reduces the number of administrations,” he said. ), we expect to be able to verify the data.”

Meanwhile, Alylam is conducting phase 1 clinical trial of APP C16 RNAi ‘ALN-APP’ with Regeneron as an indication for EOAD. EOAD refers to Alzheimer’s disease whose symptoms begin before the age of 65 and accounts for 4-6% of all Alzheimer’s diseases.

In particular, Alaylam expects that ALN-APP, which targets APP, can be applied to various brain diseases related to APP in addition to AD. This is because most of the drugs currently under development, such as Biogen’s ‘Aduhelm’, target amyloid beta (Aβ), which is formed by cleavage of APP.