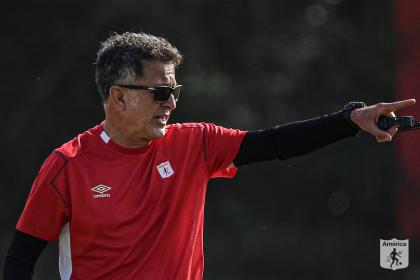 This Tuesday, the left-back Elvis Mosquera, one of the players who were among the requests of coach Juan Carlos Osorio to the directors of América de Cali, is expected in the capital of Valle del Cauca.

The information was confirmed to FUTBOLRED by Jaime Elías Quintero, president of the Santander club. “America takes an incredible person, that boy is totally given to his family, now as a footballer I hope he will give the team a lot, because he gave us a lot. I do not like to clip the wings of anyone in the group, whoever has another option, well done. Elvis hurts me, but that’s the reality, everything has its beginning and its end. As a person he is incredible and as a very compliant player.

Mosquera was with the Canarian team from the beginning of the year to date and was always fixed in the starting lineup. “He is ambidextrous, left back, but centers well with both profiles, hopefully he performs like here. He is a brand player, when he is asked to go and there is a player who opens space for him, goes to the line, has a good jump, presses and crosses well. He’s a good player, ”Jaime Elías remarked.

Quintero added that “I spoke with him this afternoon, but I told him to come up early tomorrow to say goodbye to the group before traveling to Cali, ‘don’t leave without saying goodbye.’ Then he will come to Cali to take the exams and settle everything with America ”.

The manager confirmed that the player will pay money to Bucaramanga, surely with a contribution from America. “I don’t know what negotiation he made with them, he wanted to be there and when you do things with the will, things go well for you,” said the president of the Bumangués cast.

Mosquera is 30 years old, he debuted in 2010 with Santa Fe, but he was also in Águilas Doradas, Equidad, Envigado, Medellín, Once Caldas and Bucaramanga. Internationally he has played the South American Cup.

With Mosquera there would be four new incorporations from America for the process that Juan Carlos Osorio begins, since he joins Jorge Segura, David Lemos -who had an injury yesterday in practice and diagnostic images will be taken to know the severity- and Larry Angulo, waiting for a right back, a mixed midfielder and a striker with a goal.