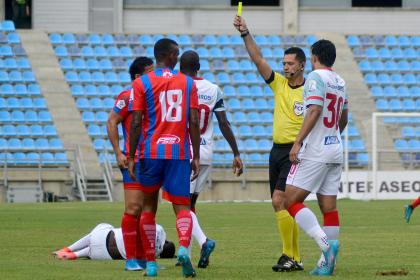 América de Cali was left without bread and cheese in the first half of 2022. Not only was it eliminated in the preliminary phase of the Copa Sudamericana, but it was also left out of the dance of the eight in the League and failed advance to the quarterfinals of the Betplay Cup. An undeniable sporting failure that Tulio Gómez, the club’s largest shareholder, spoke of, accepting responsibility for him and pointing to Juan Carlos Osorio.

“In this semester we have failed, it is the fault of Tulio and Osorio, Guima’s responsibility will be in the second semester. We will work hard to correct mistakes and bring Mechita back to the top of the FPC, defeats are not eternal, Triumphs are ephemeral,” the manager wrote on his social networks.

In a conversation with the best of the Win Sports date, the director referred to the role of the ‘Red Devils’ this year, after getting excited about the project that Juan Carlos Osorio directed and that promised titles for the institution. Tulio was clear and stressed that “we totally failed, we haven’t had such a bad campaign since 2018. America, as a big team, is forced to be in the top eight. We made mistakes and we’ve made many mistakes.”

Gómez assured that the contract he had with coach Juan Carlos Osorio did not allow them to remove them early. “If it had been possible from the beginning, we would have changed the coach, but there we were wrong. Now the contract of the coach and of those who arrive, will have a clause that the non-classification of the club within the octagonal, will be cause for dismissal. They will have 3 months severance pay if he has to be fired, an escape clause.”

The manager came out in defense of Alexandre Guimaraes after the failure of América de Cali in the semester and said that he is not only a coach who has been arriving but also found a “shattered” team. He mentioned that physically they are very bad. “I told him that his responsibility is for the second semester, that it is difficult, but the players are very happy with his arrival. He is very practical and works on the physical part, the tactics, he has good group management”.

America will close its bitter semester on date 20 of the Betplay I-2022 League when it faces Unión Magdalena in Cali. The cyclone comes from dispatching it in the round of 16 of Copa Colombia.

In this semester we have failed, it is the fault of Tulio and Osorio, Guima’s responsibility will be in the 2nd semester, we will work hard to correct mistakes and bring Mechita back to the top of the FPC, defeats are not eternal, triumphs they are ephemeral!!

Silvia Pinal cancels participation in work; Silvia Pasquel says how she is

in the long term, they could aggravate back pain