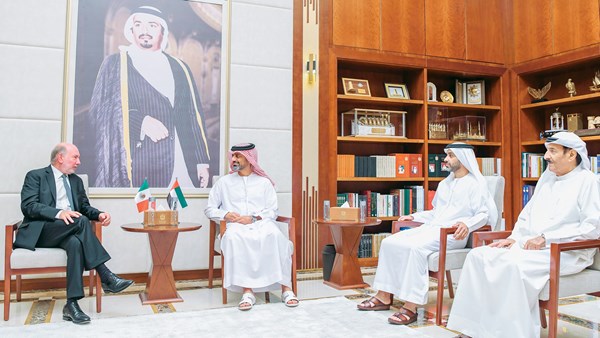 His Highness Sheikh Ammar bin Humaid Al Nuaimi, Crown Prince of Ajman, received yesterday at the Ruler’s Court Luis Alfonso de Alba Gongora, the Mexican ambassador to the country, who came to greet His Highness. His Highness the Crown Prince of Ajman welcomed the Mexican ambassador, wishing him a pleasant stay, success and success in his work as his country’s ambassador to the country.
During the meeting, bilateral relations of cooperation and friendship between the UAE and Mexico in various fields were discussed, and friendly conversations were exchanged that would strengthen that relationship between the two friendly countries and peoples, in addition to exchanging views on a number of regional and international issues of common interest.
The Mexican ambassador praised the relations of joint cooperation between the two countries, and their consolidation in all sectors, in a way that is consistent with the common interest and supports the vision and aspirations of the two governments, praising the civilized development witnessed by the UAE in general and the Emirate of Ajman in particular.
The meeting was attended by Sheikh Ahmed bin Humaid Al Nuaimi, the Ruler’s Representative for Administrative and Financial Affairs, Hamad Rashid Al Nuaimi, Director of the Ruler’s Court, Salem Saif Al Matroushi, Deputy Director of the Ruler’s Court, Yousef Muhammad Al Nuaimi, Director General of the Protocol and Hospitality Department, and a number of senior officials.

Al-Arabiya anchor, Fatena El-Gamal, falls into a fit of hysterical laughter after a famous preacher flirts with her live on the air.. This is what happens in the bedrooms.!! (video)