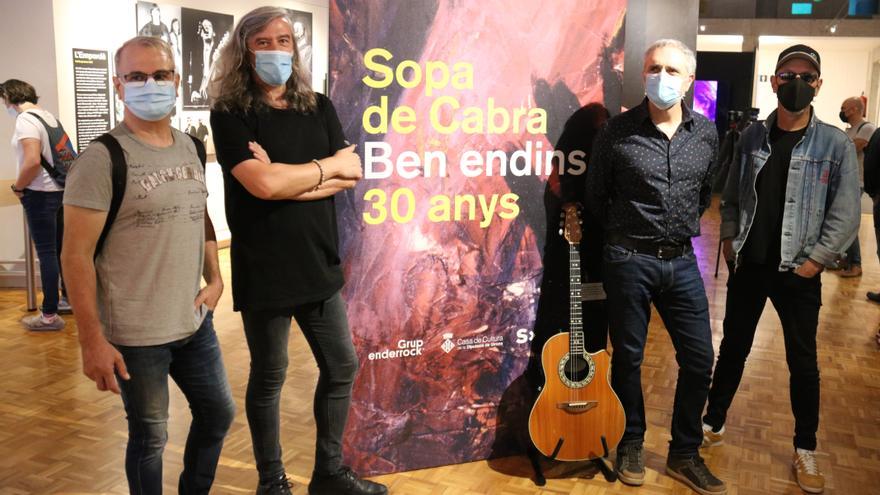 Goat Soup in the room that exhibits the ‘For many years malparits!’
Gerard Vila

The House of Culture from Girona has presented this Thursday ‘For many years, you bastards’, an exhibition that pays tribute to the 30th anniversary of the album Goat soup ‘Well inside’. An album that the director ofEnderock, Lluís Gendrau, has been defined as “the most emblematic” in the history of the Girona band. In fact, this is the Catalan rock album that has sold the most copies, 130,000. The exhibition features a collection of images and elements, some of them unpublished such as an acoustic guitar of Josep Thió, a painting that inspired the album cover or a label of theSGAE of when the disc surpassed the 100,000 units. Goat Soup singer Gerard Quintana has explained that the key to success is that people “have made it their own.”

“The ‘Carrer dels Torrats’ in Girona spread like wildfire to all parts of Catalonia.” These are the words of Salvador Escribà, leader of the Salseta del Poble Sec and one of the people responsible for ‘Ben endins’ become a sales success. And it is that the iconic album of Sopa de Cabra has turned 30 years old, from that distant 1991 when it became “a reference” of Catalan rock. Since then, 130,000 copies sold and a multitude of hymns by the Girona band that now recognizes the success of the album in an exhibition.

‘For many years, you bastards!’ proposes a collection of photographs and unpublished material of the band that can be seen from this Thursday to November 5 at the Casa de Cultura. An exhibition curated by the Enderrock Group, with the support of the Girona Strenes Festival. The president of the rock magazine referring to Catalonia, Lluís Gendrau, explains that this is an “emblematic” album by the band “for what it meant”.

“Over the last 30 years, it has become a reference for being the best-selling Catalan rock, but also because it is the zenith for the form and, above all, for the moment in which it was published,” remarks Gendrau.

A Gendrau who has coincided with the singer of Sopa de Cabra, Gerard Quintana, who has acknowledged that “never” would they have imagined getting an exhibition of the album, or the sales success it has had. Quintana notes that the “key” to this success is that people “have made it their own.” “It’s more from the audience than ours,” the artist riveted.

Quintana also noted that this is a “special” record. Until then, Sopa de Cabra had only recorded two studio albums and they decided to record live ‘Ben endins’. “It’s a way to be authentic. We would go to the bars and listen to the songs on the studio records and leave because we were embarrassed by those clean guitars,” he remarked.

Some of these concerts can be seen on various screens installed in the exhibition next to the Aula Magna of the Casa de Cultura de Girona. The proposal also has panels and a collection of unpublished photographs, as well as some unpublished elements, such as a guitar with which Josep Thió played ‘Si et quedes amb mi’ and ‘El boig de la ciutat’ in the legendary concert in the old Zeleste room in Barcelona where ‘Ben Endins’ was recorded, a stamp of the General Society of Authors and Publishers (SGAE) confirming the 100,000 sales or a painting that inspired the album cover .

In a presentation with a crowd of guests, Sopa de Cabra thanked that the phenomenon of the album is maintained and that these songs are “still alive”. In fact, Quintana believes that the success of ‘l’Empordà’ is due to the publication of ‘Ben endins’. Quintana also explained the origin of ‘Good night, bastards!’ that woman starts at all her concerts. It was before a show in Barcelona where the band’s bassist, Francesc Lisicic ‘Cuco’ challenged him to insult the spectators. “Luckily in the end I didn’t say good night son of a bitch, seeing the success of the phrase,” Quintana quips.

‘For many years, you bastards!’ it also reviews the musical context of the time. In this sense, images of groups of the moment like Sangtraït or Umpah-pah are seen.

A reissue of the album

To celebrate the 30th anniversary, a double CD of the album will be reissued, which was released in 1991 with five bonus tracks, which will also be available on vinyl and, if all goes well, will be released before Christmas. A ‘Ben endins’ tour is also planned for 2022. The event was also attended by the head of the Culture Department of the Girona Provincial Council, Albert Piñeira.