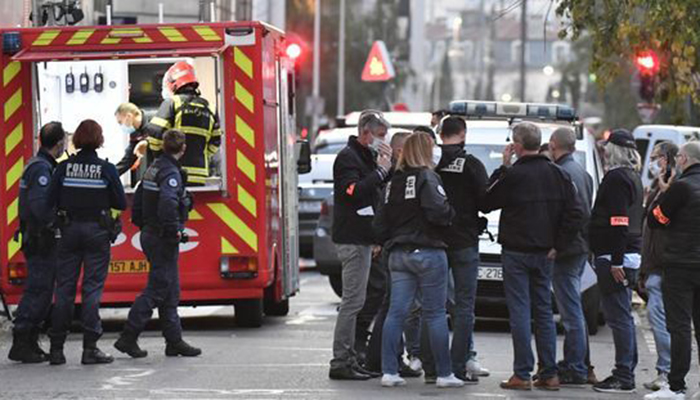 A Greek Orthodox priest was seriously injured by gunshot Saturday afternoon in Lyon (central-eastern France) while he was closing his church, by a lone man with unknown motives.


“At this stage, no hypothesis is ruled out or privileged,” said Lyon prosecutor Nicolas Jacquet, while France is still in shock from the Islamist attack committed by a Tunisian in a church in Nice, which has killed three people.

A suspect “who may correspond to the description given by the first witnesses was placed in police custody”, the magistrate said a little later.

The weapon probably used, a sawed-off shotgun, was not found on him. “The verifications are continuing on its possible implication”.

Residents of the church and a patrol of the municipal police were alerted around 4:00 p.m. by two detonations near the Hellenic Orthodox church located in the 7th arrondissement of Lyon.

On the spot, “they spotted an individual fleeing and discovered at the back door of the church a man wounded by bullets who turned out to be the archpriest of the place of worship,” the prosecutor’s office continued.

The prosecution, which indicated that an investigation for “murder” was open, specified that it “remains in close contact with the national anti-terrorist prosecution” which is not seized for the moment.

Some police sources also called for “caution on the grounds of the assault”.

The priest was “in the process of closing his church” at the time of the events, which took place inside the place of worship. There was no ceremony “in progress and” the priest was not in uniform “, we learned from sources close to the investigation.

Nikolaos Kakavelakis, 52 years old, targeted by two shots, was hit “in the liver and touching the tip”. He is in serious condition and has been hospitalized. The weapon, a sawn-off shotgun, was not found.

The head of the Church of Greece, Mgr Iéronymos, denounced Saturday a “horror which exceeds human logic”.

The Assembly of Orthodox Bishops of France (AEOF) indicated that it could only “condemn these acts of violence”.

According to an AFP journalist on site, the small art deco-style church, adorned with a mosaic of the Annunciation, is installed in a rather quiet residential area, with very little traffic in the streets on this first week. end of re-containment.

In Paris, the Minister of the Interior Gérald Darmanin opened a crisis unit where Prime Minister Jean Castex was to join him.

“I must tell you that you must count on the entire determination of the government to allow everyone to practice their worship in complete safety and in complete freedom”, reacted Mr. Castex, traveling to Saint-Etienne-du. -Rouvray (north-west) where a Catholic priest was assassinated by Islamists in 2016.

He went there to discuss with the Catholic community and ensure the strengthening of the Sentinel device since the Nice attack.

This new event affecting a place of worship in France has been condemned as an “abominable act” by the President of the European Council, Charles Michel, for whom “freedom of conscience in Europe is guaranteed for all and must be respected”.

While the motives of the aggressor are still unknown, the President of the European Parliament, David Sassoli, spoke of a “new attack”, adding that “Europe will never bow to violence and terrorism”.