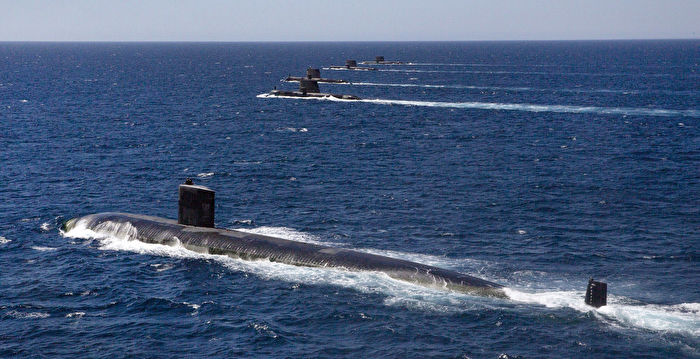 Although officials from the three countries have stated that the tripartite cooperation between the United States, Britain and Australia is “not directed at any country,” the outside world generally believes that the new partnership can effectively strengthen the United States’Chinese Communist PartyDeterrent.

London’s “Financial Times” pointed out that through this agreement, the United States can establish a strong military presence outside of the CCP’s missile encirclement.

Euan Graham, an Asia-Pacific security analyst at the International Institute for Strategic Studies in Singapore, said: “Australia is not only a political ally, it is in a convenient location. In addition to China’s longest-range missile, Australia Located outside the encirclement of all missiles.”

“The United States may establish a strike base there and let it perform the functions of the early 1940s,” Graham said. “Technology has changed a lot, but the geographical environment will not change.”

He was referring to the fact that the United States and Australia fought against Japan together during World War II, when Australia was an important US military stronghold.

The “Financial Times” pointed out that the US Air Force may deploy bombers capable of carrying anti-ship missiles in Australia, which could threaten Chinese naval vessels throughout the Indo-Pacific region.

Analysts also believe that the US Navy may deploy nuclear submarines at HMAS Stirling in Perth. Australia’s Cocos Islands (Cocos Island) in the Indian Ocean is also very suitable for monitoring the CCP’s military activities in the South China Sea.

Alexander Neill, an expert on Asian security affairs, believes that for the United States, AUKUS can “enhance the capabilities of its allies and use new relationships as much as possible to increase American influence.”

Neal said: “This means integrating your partners and allies into your battlefield, which can multiply your power and deter countries like China. This is the role of AUKUS.”

According to the Financial Times, the Chinese Communist Party is constantly expanding its missile arsenal, increasing its submarine fleet, and developing electronic warfare and space capabilities. These military threats are gradually threatening the ability of the US military to operate freely in Asia.

For more than a decade, US military officials have been devising various ways to deal with the expansion of the CCP’s military capabilities. This includes changing the deployment of the Marine Corps, establishing or expanding airport runways on Pacific islands such as Midway Island, and increasing a military presence in northern Australia. However, AUKUS can further strengthen these efforts.

David Santoro, chairman of the Pacific Forum, a US think tank, said: “I think it does fill the gap in US military power in the region.”

“We are now carrying out a very serious alliance strengthening with Australia, which is carried out in the context of more US investment in the Group of Four.” Santoro said.

He was referring to the partnership between the United States, Australia, India and Japan. In recent years, this mechanism, known as the “Quadruple Security Dialogue” (QUAD), has gradually become an important alliance for the United States and Indo-Pacific allies to counter the influence of the CCP.

Some analysts pointed out that as the CCP becomes increasingly aggressive economically and militarily, the organization may develop into the Pacific version of the “NATO” military alliance. The four countries also held a joint maritime military exercise in Malabar at the end of last month.

Next week, the Quartet will hold a summit, and outsiders speculate that it may try to deepen defense cooperation and overall dispatch the development of military assets in the Indo-Pacific region.

The core of the U.S. military strategy is a method known as comprehensive deterrence, that is, integrating capabilities in various fields of the U.S. military, including the most advanced weapon systems and technologies, the latest combat concepts, and inter-services such as navy, land, air, space, and networks. Work seamlessly together. At the same time, the U.S. military will also develop closer relations with allies’ militaries. This allows the United States to conduct operations closer to Chinese territory and effectively protect American assets from attack.

U.S. officials stated that the three countries will spend 18 months in consultation on follow-up arrangements.

In an interview with the Voice of America, John Schaus, a senior researcher of the International Security Project of the Center for Strategic and International Studies (CSIS), a Washington think tank, said that under the Five Eyes alliance in the past, the focus was on intelligence sharing. The new trilateral security partnership involves defense and scientific and technological research.

He believes that the new trilateral cooperation mechanism may provide a new model for the future cooperation between the United States and its allies to promote common goals.

He said: “We will see more such arrangements, countries with similar values, similar interests and goals, find targeted ways to cooperate.”