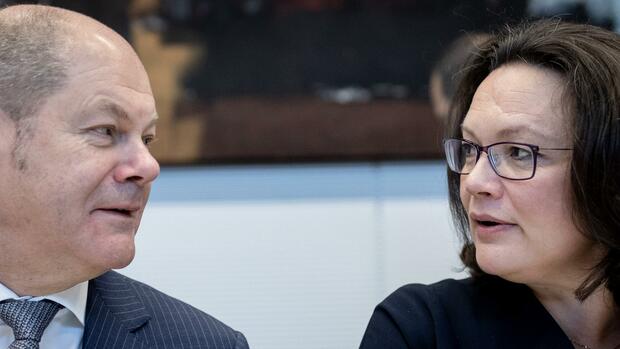 Berlin The Federal Post and Telecommunications Agency (BAnst PT) has so far had a niche existence. Few people have ever heard of the federal agency, which looks after the care of the officials of the former state-owned company Deutsche Bundespost.

Nahles is to be elected president in June and will earn around 150,000 euros in her new office, roughly as much as a department head in a federal ministry, media reports said in mid-May. That Nahles should be president was true. However, their grade and salary were incorrect.

According to research by the Handelsblatt, Nahles will earn significantly more in her new job. So Nahles should not receive 150,000, but 180,000 euros when he takes office, an insider told the Handelsblatt. After a few years in office, their remuneration should then rise to around EUR 200,000.

It is difficult to find out how much the president of the Federal Office of Post and Telecommunications is paying, even though the facility is a public institution. The annual report is not open to the public, and even those who hold it in their hands should not search for the presidential salary there, say officials who are familiar with the report.

The FDP parliamentary group has therefore made an inquiry to the Federal Ministry of Finance regarding the amount of the director’s payment. According to the answer, the previous president Andreas Hermes is already earning significantly more than the 150,000 euros that were reported as a salary by Nahles.

Salary for grade B9 exceptionally high

Hermes received 165,000 euros as starting salary when he took office in 2015. In the presidential contracts, an “adjustment clause” was also agreed, according to which the annual salary increases in line with the change in the basic salary of an official in grade B9, “the Federal Government replied. After three years in office, Hermes therefore received a salary of EUR 187,000 a year from August 1, 2017.

It was “likely” that Nahles ’contract would also contain such an adjustment clause, the insider told the Handelsblatt. Nahles ’starting salary of 180,000 euros should therefore increase over the course of her term by a similar amount to that of Hermes. That would be around 200,000 euros.

This salary is exceptionally high for grade B9. This has an administrative background: the pension claims of the presidents would be paid with the salary unlike an ordinary civil servant in the ministry, according to the insider. In addition to her salary, Nahles is also “contractually available to have a company car for private use,” as the Federal Government replied to the FDP request.

FDP budget politician Otto Fricke says: “I treat every president who does his job professionally with his salary. In public positions, however, it must always be transparent how much is paid and what extra benefits are granted. ”It is therefore good that the Federal Government has now ensured transparency.

Travel time only one hour

For Nahles, the presidential job is well compatible with her new life after politics. The journey to Bonn from her home in the Rhineland-Palatinate Weiler, where Nahles lives with her little daughter, is only one hour. In addition, the presidency is an apolitical administrative job. Nahles had always emphasized that there should be no comeback in politics.

Still, her calling had caused controversy. The Federal Post and Telecommunications Agency is a downstream authority of the Federal Ministry of Finance, the position is not advertised publicly. In addition, the job within the ministry is considered a deportation station for unpleasant officials.

See Also:  this is how the wheel burns in the future

Nahles also has no substantive expertise. Critics therefore complain that Finance Minister Scholz has provided his party friend with a well-paid job. Even in the Federal Ministry of Finance, officials with SPD party books are critical that Scholz Nahles of all people got a new job. Both are considered close confidants.

Defenders of Nahles counter this, such a position primarily requires leadership strength and experience in the management of authorities. Nahles brings both with her as a former Federal Minister of Labor and party leader. She was actually overqualified for the job. And Nahles was never the type who avoided work, but worked in almost every job around the clock.

In addition, Nahles had to be credited with not having taken on a job in the private sector in which she had to act against her beliefs or in which there might be a conflict of interest due to her previous political activity, her supporters say.

Nahles has not yet been elected. The Board of Directors of the Federal Agency has yet to approve its appointment in mid-June. However, this is a matter of form.

More: The former SPD leader Andrea Nahles should get a lavishly endowed job – and would continue an unfortunate tradition. But that would be dangerous right now.