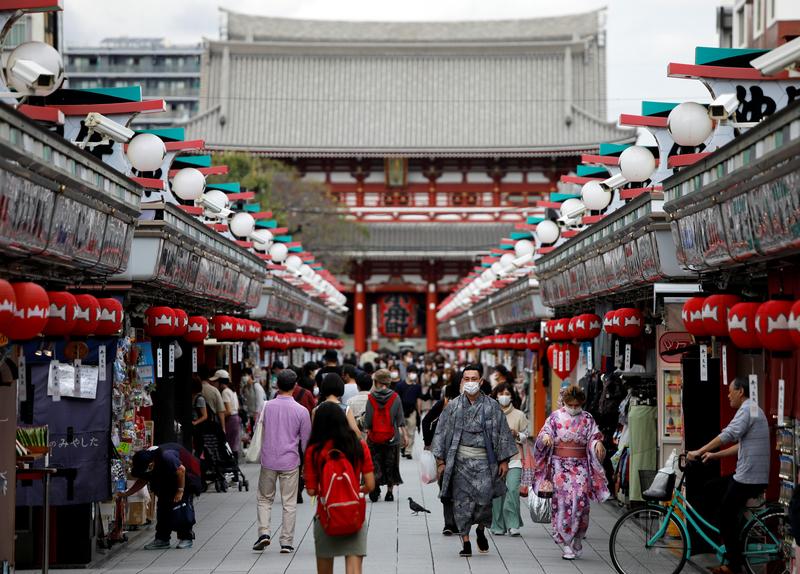 [Tokyo 31st Reuters]–Japan lifts the ban on accepting foreign tourists visiting Japan for the first time in about two years. Fumio Kishida’s administration, which is sensitive to public opinion ahead of the Upper House election, may lead to the re-expansion of the new coronavirus infection, although it was pushed back by the demands of the tourism industry and the global trend to ease border measures. Limits the number of immigrants to 20,000 per day. It seems that it will take some time to resume in earnest, and it is far from achieving the goal of 60 million people a year by 2030, which is still set by the government as a growth strategy.

The rickshaw, a tourist attraction in Asakusa that runs along the Sumida River and in front of Kaminarimon while looking at the Tokyo Sky Tree, has been a tough day for the past two years. Before Corona, foreigners were a part of the main customers mainly on weekdays and off-season, but it has decreased sharply since the epidemic started. “We managed to reach a few tourists from rural areas,” said Yui Oikawa, general manager of Rise Up, which handles a tourist information business using rickshaws. It is said that the number of domestic tourists has begun to increase this year, but “I want foreigners to return to the town of Asakusa sooner. It is more lively. People from various countries visit Sensoji Temple and have a drink. That was a nice view like Asakusa, “says Mr. Oikawa.

From June 1st, Japan will increase the number of immigrants per day from 10,000 to 20,000. From the 10th, we will resume accepting foreign tourists for package tours with tour conductors. For the tourism industry, which has suffered from the Korona-ka, resuming inbound has been a long-awaited decision. Hiroyuki Takahashi (Chairman of JTB), Chairman of the Japan Association of Travel Agents (JATA), welcomed on May 27, “We have made great strides toward the resumption of international exchange.”

The number of foreign tourists visiting Japan, which peaked at 31.88 million in 2019, dropped to 250,000 in 2009. The amount of money they spend in Japan has also dropped sharply from 4,813.5 billion yen to 120.8 billion yen. JATA has submitted more than 10 requests to the government and the ruling party to ease immigration restrictions, but an official of a tourism company said, “The (government) movement was sluggish.”

Under the Kishida administration, which took strict border measures, the number of people infected with corona continued to decline. As the upper house election approaches this summer, the officer said he was worried that foreigners with different awareness of corona measures such as wearing masks might enter the country and spread the infection again. Looking back on the feeling.

The wind direction changed during the Golden Week holidays from late April. One of the reasons is that the prime ministers who went abroad were forced to “open the country” at the destination, he explained. One of the factors was that the number of infected people did not increase sharply after the holidays, when there were no restrictions on behavior for the first time in three years. I think I also made the decision, “said another tourism company executive.

Resol, which operates hotels all over Japan, receives reservations from Japanese people who cannot travel abroad, as well as temporary reservations and inquiries for group tours from Europe such as Germany and France through agents. Even so, compared to the time when 140,000 people entered the country a day, the immediate effect cannot be expected with the upper limit of 20,000 people.

Hideaki Kageyama, general manager of the hotel division, predicts that “it will be about a year or two before the bus arrives in front of the hotel and more and more groups come in, as it was before Corona.” “Inbound customers are absolutely necessary. Hotels, restaurants, and tourism will not be possible without inbound customers,” he said. “I want you to open (borders) like overseas.” The company has four new hotels in front of the Tokyo Olympics. I expected an increase in inbound demand, but it was decided that no spectators would be held, and it ended in a miss.

On the other hand, ANA Holdings executives expect that even if the mitigation is gradual and limited, “a customized travel plan for the wealthy will be a new business for tourism in the with corona era.” Several companies including the company and local governments have started a travel service demonstration project for wealthy people with high unit consumption even with a small number of people from April 19.

As the Kishida administration is concerned, resuming inbound is also back-to-back with the risk of spreading infection. The government has already conducted a demonstration experiment to accept a small number of foreign tourists in order to formulate guidelines for travel and lodging companies when infected people appear. Tour participants have arrived from the 24th of this month. Infection of one participant was confirmed in Oita Prefecture on the 30th, and three companions also waited at a separately secured hotel and canceled the tour.

Takahide Kiuchi, executive economist at Nomura Research Institute, points out that “there is still a risk of infection from the current situation, but if the risk of aggravation is not very high, it is necessary to continue mitigation.” Mr. Kiuchi estimates that the additional economic effect in June due to the relaxation of border measures will be 8.1 trillion yen annually compared to May.

Cabinet Public Relations Secretary Takayuki Shikata held a briefing session for foreign media on the 20th, saying, “There are voices from the tourism industry to accept more foreign tourists.” “We need to balance the number of infected people with deregulation,” he said.