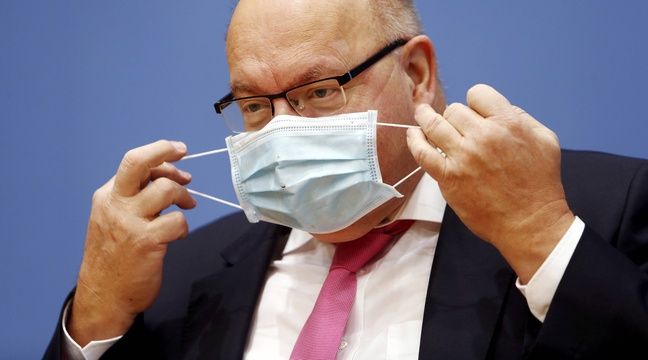 Restrictive measures to combat the coronavirus are likely to last until spring in Germany, the Minister of the Economy warned in an interview on Saturday. “We have three or four long winter months ahead of us,” Peter Altmaier told Daily The world. “A lot will depend” on the arrival of a vaccine, he said. But “it is possible that the restrictions will also continue in the first months of 2021”, he added.

At the same time, some 600 delegates from the far-right German party, which shows its solidarity with the mask-wearing movement, started a controversial congress. The co-president of the Alternative for Germany (AfD) Tino Chrupalla denounced from the outset “the state of emergency policy” led by Angela Merkel’s government against the coronavirus. “Lives are shattered, a wave of bankruptcies is already underway (…) A lot of people are losing their jobs,” he said.

A hardening of measures Wednesday

Germany, which has resisted the pandemic rather better than many neighboring countries but is currently struggling to contain the second wave of Covid-19, decided on Wednesday to toughen its measures to fight the virus. The aim is to further reduce the possibilities of contact until the beginning of January, by limiting the number of participants in family reunions to five, for example, with exceptions for the end of year celebrations.

In front of the deputies, Chancellor Angela Merkel had justified this new turn of the screw by the still “too high” level of new infections, even though they were “falling at high speed in some neighboring countries”, without citing them . In Germany, new daily cases still exceeded 21,000 on Saturday, while the number of deaths increased in 24 hours by 379, for a total of 15,965, according to the Robert Koch health watch institute.

The AfD rally is held until Sunday in Kalkar, North Rhine-Westphalia, on the site of a former nuclear power plant never entered into service, transformed into a leisure park and hotel complex. The leader of the first German opposition party urged delegates to scrupulously observe the respect of barrier gestures and the wearing of protective masks, a sine qua non for the continuation of the rally.

The AfD has set up its own security service to ensure that the instructions are applied in the building, which brings together some 800 people, party employees and journalists included. According to the police, about 500 people demonstrated peacefully against the holding of the congress at the call of a collective “Stand up against racism” made up of NGOs, parties and unions.

The mayor of Kalkar Britta Schulz denounced an “irresponsible” decision on the part of the AfD, fearing the emergence of a new hot spot virus infection. The authorities, however, had to give their approval because the congress, which should lead to the election of various members of the party leadership, falls under the category of exceptions provided for in the region.

Germany on Friday exceeded one million cases of coronavirus since the start of the pandemic, and recorded nearly 16,000 deaths, according to data from the Robert Koch health watch institute.

Angela Merkel, who is due to complete her fourth and last term next year, for her part achieved popularity records, the majority of Germans hailing her management of the health crisis.