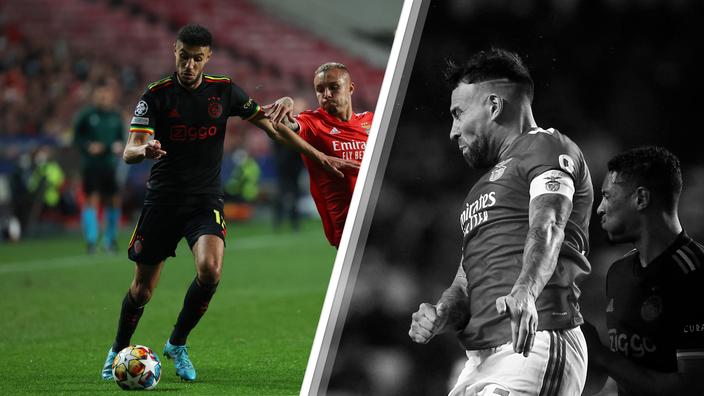 The madness of Ajax, Benfica giving everything but also weaknesses on both sides, discover the Tops and Flops of the meeting between Benfica and Ajax Amsterdam (2-2).

Noussair Mazraoui and Antony put Benfica in difficulty throughout the game. And the Brazilian starts on very good bases. From the first minute, he chained a small bridge and a roulette in the opposing area. Both players are directly involved in Ajax’s first goal. The Moroccan recovers the ball very high in the feet of Alejandro Grimaldo, before splitting with his right winger. Antony could have hit or shifted in the axis but he prefers to give it to his defender. He crosses perfectly for Dusan Tadic, alone at the far post, who places his recovery perfectly. On this right side, Antony was a danger all match while Noussair Mazraoui could have scored his team’s third goal just after the hour mark (64th). His strike was blocked by Odisseas Vlachodimos but he was offside anyway. Six shots on target in total for both players. 12 balls recovered for the striker, match record.

And immediatelyTrailing twice, Benfica do well against Ajax Amsterdam

Benfica does not abdicate

The self-sacrifice of the Lisbon people to show to all the teams. Trailing twice, Nelson Verissimo’s players never let up in this game. On the contrary ! In the second period, they were more dangerous than their opponents. They who equalized in the 72nd minute could have come back to score earlier in the game without the misses of Everton (56th), Darwin Nunez (60th), and Roman Yaremchuk (69th). The Eagles shot 14 times during this match, including eight attempts during this second period. They could also have benefited from a penalty, after Edson Alvarez’s fault on Gonaçalo Ramos (67th).

Ajax miss out on victory

Benfica had plenty of chances in the second half and could have scored a third goal. But it is Ajax Amsterdam who can feed the most regrets this Wednesday evening. Twice, Erik Ten Hag’s players led in the score, before being overtaken. They concede a goal gag, a few minutes after the opening of the score. But more than the goals conceded, it’s the state of mind that can leave regrets. Ajax never stopped attacking during this match, freeing up monstrous spaces behind. With very attacking sides, the central defense was often alone to face the attacks of the eagles. On the second goal of the Lisboètes, it was Jurrien Timber, too busy collapsing in the opposing area, who did not have time to return to position himself to counter the local attackers. Will of Erik Ten Hag, or not, this total football would have cost Ajacides dearly.

Nicolás Otamendi and Jan Vertonghen, 34 each, no longer have their old legs. And that, the opposing attackers know it well. On Ajax’s first goal, Dusan Tadic is left completely alone at the far post. The Serbian striker placed himself perfectly in the free space between the Argentinian and his right side, Gilberto. On the second goal of the Amsterdammers, it is the Belgian central defender who is at fault. Jan Vertonghen got caught in the duel by Sébastien Haller, who won in force, to push the ball into the back of the net. Throughout the match, both actions struggled to contain the Ivory Coast striker, who cemented his top spot in the Champions League scoring charts.