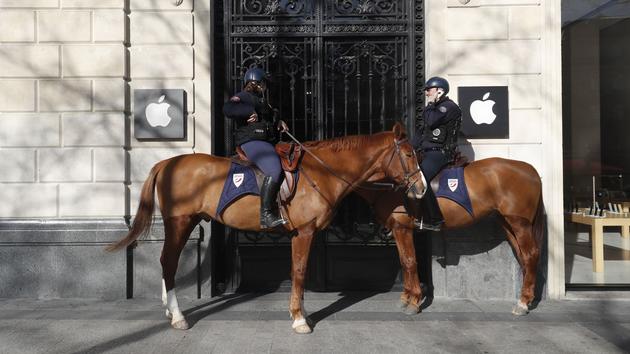 The sanction has been dropped, and it is the heaviest ever imposed by the French Competition Authority. Apple is fined 1.1 billion euros. Two wholesalers were convicted in the same case, Tech Data and Ingram Micro, for € 62.9 million and € 76.1 million respectively. This brings the total fine to 1.24 billion, another record. The Authority is determined to strike a blow to mark the spirits. But Apple is already considering appealing.

“The Authority deciphered, during this case, the very specific practices that had been implemented by Apple for the distribution of its products in France, excluding iPhone “, said Isabelle de Silva, President of the French Competition Authority. In particular, Apple and its two wholesalers are accused of agreeing not to compete and prevent distributors from playing with each other. With this practice, Apple has kept control of the retail prices of its products. The brand, which likes to control its image and its communication, has done the same with distribution and its pricing policy.

“Distributors said to be Premium could not safely carry out promotions or lower prices ”, adds Isabelle de Silva. For the Authority, this has resulted in an alignment of the selling prices of Apple products to end consumers, in almost half of the retail market for Apple products. In other words, it was useless to run the stores to find the good deal on a product of the group of Tim Cook, the prices were the same everywhere.

“Finally, Apple has abused the economic dependence of these Premium distributors on it, by subjecting them to unfair and unfavorable commercial conditions compared to its network of integrated distributors.”, specifies Isabelle de Silva. The gravity of the facts explained explains the amount of the penalty. In particular, Apple is accused of having first served its own stores during the launch of certain emblematic products, to the detriment of its authorized resellers, the Apple Premium Resellers (APR). De facto, a number of stores, known to fans of the brand, lowered the curtain after the opening of the Apple Stores. Faced with customers impatient to have the latest innovations in hand, delays in delivery made their position untenable. This grievance was notably brought before the Competition Authority by eBizcuss, one of the APRs concerned. Isabelle de Silva’s services recall that “a manufacturer is free to organize his distribution system as he sees fit but he must respect competition law” Twelve years ago, Apple had already been singled out for having entrusted the exclusive distribution of its iPhone France to Orange. After a year, he had to give up the practice.

Apple immediately reacted to the sanction. “The decision of the Competition Authority is extremely regrettable. It concerns practices that go back more than ten years and ignores thirty years of solidly established principles of law on which all businesses in France rely. It will lead to a chaotic situation for economic players from all sectors. We strongly disagree with this decisionSaid the group immediately. It is rare to see such a clear-cut position when faced with the decision of a competition authority. But it says a lot about the tensions that reign in a hypercompetitive market, with the rise of Chinese manufacturers. The situation is all the more complicated for the American since he is regularly under fire from critics, he is accused of not paying enough taxes, of having programmed the obsolescence of certain products … February, the DGCCRF (Directorate-General for Competition, Consumer Affairs and Fraud Prevention) fined it 25 million euros for slowing down the iPhone 6, 6S, SE and 7 following an update of the operating system. The whole thing is made worse by the current context. Apple has announced the closure of all these stores in Europe due to the coronavirus crisis.

See Also:  The German "balance police" is about to end