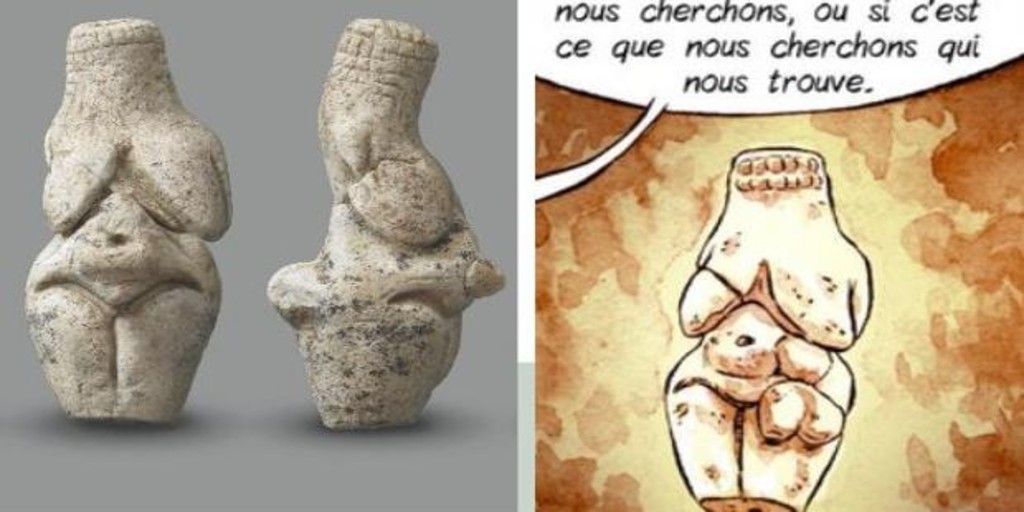 The archeology and comics they are two seemingly unconnected worlds. Two years ago, the Louvre Museum surprised everyone with a exposition that put in relation to this scientific discipline with the ninth art; and now, this exhibition, completely renovated, arrives at the Museum of Picardy between May 29 and August 29, 2021 and at the Halle Freyssinet from June 5 to 29, 2021; coinciding with the Festival de la Bande Desinnée d`Amiens.

Archeology and comics are thus intimately linked, as shown by this exhibition that creates a interesting dialogue between the plates of comic and the antiques from the Louvre Museum and Picardy. The exhibition bears the title of “Treasure Hunters, Story Hunters”, which already offers a valuable clue as to how the two disciplines merge.

The project curators are correct in suggesting that for archaeological science ‘each discovery adds a stone to the edifice of knowledge, but it limits a little more the space that is free for interpretation. Whereas in the comic, each discovery is, on the contrary, a new material with potential to work with, a new dream medium ».

Viewing the originals of teachers of the ninth art present in the sample of authors such as Moebius, Bilal, Manara, Dirks, Sorel, Sfar Mathieu, Crécy o Bouq, Andreas, McCay, Blutch, Chéret, Martín, and a long etc., I wonder if their drawings will inspire future archaeologists. It would be nothing new. Suffice it to recall the magnificent pictures of the artists who accompanied
Napoleon in his expeditions to Egypt and that in addition to awakening numerous vocations, they served to create the passion for the civilization of Ancient Egypt in nineteenth-century Europe.

Hidden treasures in the Alhambra and Pompeii

The title of the exhibition includes the term ‘Treasure’. Without a doubt, nothing makes us dream, or evokes our passion for archeology more clearly than this word. The exhibition is very correct in the way it collects and deals with this concept.

On the one hand, includes comic pages that accurately reflect the way it is perceived in the collective imagination of the common citizen. A Sunday plate of ‘The Little Onions’ by Rudolph K. Dirks dated 1915 shows the discovery of a rich underwater treasure; and it exemplifies to perfection the way in which the “treasure” is usually evoked in the ninth art; transmitting the idea that there is no site worth its salt if it does not contain a room full of gold and jewels.

Many comic pages in this exhibition show sumptuous hidden riches waiting to be discovered; and maybe, the one more attract attention to the Spanish be one of our Paco Roca. In his comic ‘Children of the Alhambra: The Travels of Alexandre Ícaro ‘(2003), draws the rich Nasrid treasure that remains hidden in the basement of the Granada palace. And it is that, for the France of the XIX, the northern part of Spain was as exotic and mysterious as the Arabian peninsula.

For his part, Louvre includes in the exhibition the pieces he owns from the famous Treasury of Boscoreale, a rich set of Roman goldsmithing in gold and silver that Vincenzo Prisco discovers buried under the ashes of Vesuvius on his estate near Pompeii, in the already distant date of 1895. These pieces are exhibited together with the fragments of Pompeian painting from the Roman villa of Plubius Fannius Synistor in Boscoreale that belong to the Picardy Museum’s own collection.

The comic strip por su parte, through a Pierre-Henry Gomont comic, evokes the discovery and subsequent sale throughout the world of these pieces found in Boscoreale; The usual procedure in a time when archeology and the great museums were looking almost exclusively for the most sumptuous pieces. In just two pages, the cartoonist shows in a forceful way how much remained to be done in terms of patrimonial legislation, especially to the few existing limitations to do business with that which was unearthed.

Finally, the exhibition also deals with showing the concept of “treasure” in its most contemporary sense.

They discover an exceptional 23,000-year-old Venus

Also included in the sample is the Paleolithic Venus known as the Lady of Renancourt, an exceptional discovery of 2019 in the aforementioned site of Renacourt-Amiens.

A comic by Dominique Zay y Aude Soelilhac narrates with precision the finding and the value of the aforementioned piece. Despite its miniscule size and being carved from humble stone rather than ivory or some other precious material, it is itself a true archaeological “treasure”; given the information it provides and the lines of research it opens, being a unique case in French latitudes, having to travel to Russia and central Europe to find similar pieces dating from the Gravettian period.

One of the sections that I like the most of the exhibition bears the suggestive title of “Eternal Babel”, evoking the biblical tower which is ultimately a icon of archeology next eastern; that is, a ziggurat or stepped pyramid.

The strength of this icon is the perfect example of the evocative power of the ninth art; and the exhibition gives a good account of it, including mind blowing illustrations of this type of constructions, drawn by the greatest authors of the Franco-Belgian ‘bande dessinée’ as Moebius, Bilal or Gal.

But what I am particularly pleased about is that the curators of the exhibition have decided to include in this section the work of three native authors: Paco Roca, Santiago Valenzuela, and Sagar Forniés, which in their comics also create versions of the mythical tower that do not detract at all from those of the French cartoonists. It is, in my opinion, the umpteenth proof that confirms the quality and high degree of creativity offered by the current panorama of Spanish comics.

To finish, I would like to highlight a third idea that runs throughout the entire exhibition, and which is none other than the contact that occurs between archeology and comics, thanks to a discipline they have in common: drawing.

The exhibition shows two beautiful examples in this sense. The first one is the notebook notes by Isabelle Dethan, a famous French cartoonist, who sets several of his works in the ancient Egyptian civilization.

To document his work, Dethan usually goes to the Louvre; and for hours, he draws with precision all the objects exhibited by the first museum in France, belonging to the development of daily life in the Egyptian society of the new empire: tables, mirrors, necklaces, etc. These drawings will later be transferred to his vignettes, giving a outstanding verisimilitude to his comics.

The shipwreck of Tromelin

Another magnificent example is that of the cartoonist Sylvain Savoy, who in 2006 was invited to accompany an archaeological expedition in charge of locating the settlement created by the survivors of the traumatic episode in French history known as the “Shipwreck of Tromelin.” Sylvain documents the entire campaign exhaustively, and turns it into an extraordinary album. Thanks to the magic of the ninth art, it combines the archaeological finds of the present with the exhaustive narration of what happened there.

It is a magnificent example of how archeology helps us unlock the secrets of what really happened in our past.

All the comic authors present in this exhibition, -and many others, since this is one of those cases in which it is pertinent to apply that of “They are not all who are, but they are all who are”-; they become the contemporary successors of romantic artists of the stature of David Roberts or Gustave Doré; and this exhibition simply enshrines them as such.

All of them are, without a doubt, true masters of the art of vignetting, possessing a very special sensitivity. The one that allows them to show all readers wonderful worlds that satisfy the desire that modern man feels to know past civilizations and dream of his own origin.