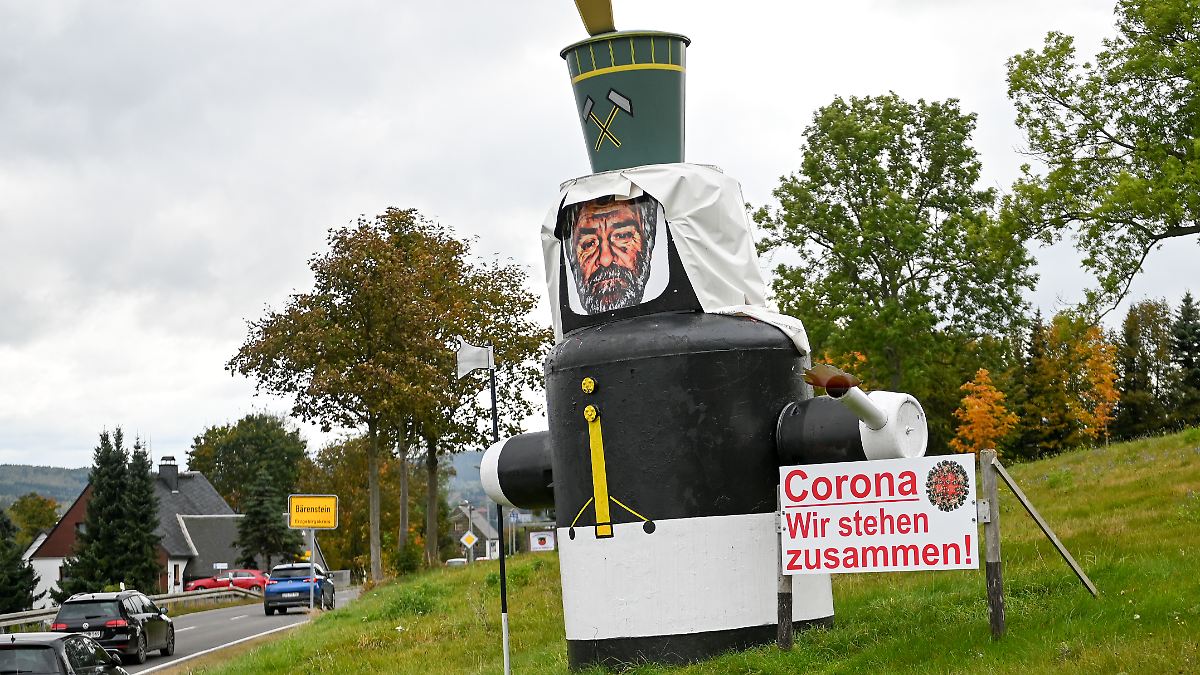 Are corona deniers to blame?

The coronavirus is apparently raging unchecked in Saxony: In several districts the incidence value is now more than 400 – the critical limit has already been reached at 200. The Free State has been reporting ever higher numbers of infections for weeks. But why here? There are various theories on this.

Saxony is considered the new corona stronghold in Germany: In no other federal state is the corona virus currently spreading faster than in the Free State. Saxony is currently reporting more than 4,800 new infections since last Friday. Ten of the 13 counties and urban districts are currently above the critical limit of 200 infections per 100,000 inhabitants in seven days. In two districts, the incidence value is even more than 400 – in the Bautzen district and in the Erzgebirge district. It is noticeable that big cities like Dresden or Leipzig get off relatively lightly.

Health Minister Petra Köpping sees one reason why the corona spread mainly affects the rural regions of Saxony in close family and friend life in the country. In the villages, the feeling of security is greater and the people are therefore less careful. The strong cohesion is nice, the minister told the MDR, “but these close friendships, these close family celebrations in the village, mean that people in these circles are very careless.”

Unlike in spring, most new infections can no longer be precisely assigned. But we know that almost 25 percent of infections come about at family celebrations and parties, warned Köpping. “Just where people meet for a long time and come closer.” This also includes “small village festivals”, said the health minister. Therefore, the top priority is: contact restrictions.

Every fourth Saxon is older than 65

The age structure in Saxony could also be decisive. “In the age group over 80, the number of infections is increasing sharply,” said Markus Scholz from the University of Leipzig to the “Bild” newspaper. “That explains why the pandemic situation in Saxony, with the highest average age of all federal states, currently looks particularly bad,” said the medical computer scientist. Loud Federal Ministry of Family Affairs 24.9 percent of the Saxon population are 65 years or older.

In addition, the over 80-year-olds in Saxony “more often than the German average,” said Scholz. “The districts of Görlitz, the Erzgebirgskreis, Meißen and Bautzen are particularly affected, where outbreaks in nursing homes have also been described.”

In fact, the severity of the disease is increasing significantly. In the districts of Central Saxony and Meißen there is noisy Divi-Intensivregister only six (of 50) or seven (of 68) free intensive care beds. In the district of Bautzen, the proportion of Covid-19 patients in intensive care units is highest at 43.2 percent. “The capacity limit has almost been reached, especially in terms of personnel,” warns Norbert Heide, medical director of the Central Ore Mountains Clinic in Zschopau. The failure rate in the care sector is around 30 percent.

The Sächsische Zeitung draws a more daring parallel to the drastically increasing number of infections in Saxony. It recently headlined “Saxony has the most corona deniers”. The report relates to a Study by Deutsche Bank. It says: “The respondents in Saxony do not see a crisis in connection with Corona more often than in other federal states.” Strictly speaking, the Saxons would be more crisis deniers than corona deniers. And yet: conspiracy ideologies and protest movements are finding fertile ground in the Free State.

As in Baden-Wuerttemberg, in Saxony, “renown and protest have matured for years,” said Leipzig historian and political scientist Michael Lühmann to “Spiegel”. This goes hand in hand with an active, conservative Protestant community life – especially in Eastern Saxony and the Ore Mountains. In those areas where the number of infections is currently skyrocketing. According to Lühmann, there is also the proximity to the AfD, which has blossomed into the anti-corona party in the wake of the pandemic. In the regions concerned, approval for the right-wing populist party in the last state parliament election was particularly high.

“We have to act here”

It cannot be said whether corona deniers are actually at least partially to blame for the dramatic infection events in Saxony. The fact is, however: Despite the partial lockdown since the beginning of November, the numbers in Saxony are not falling – on the contrary. While a total of almost 5,000 infections were registered in the first wave, the number has increased tenfold to around 54,500 in the last two months.

“We have to act here,” said Prime Minister Michael Kretschmer in view of the stress limit reached in the hospitals. His cabinet decided on Friday in a special meeting to implement the relevant federal-state resolutions from Wednesday evening – and in some cases even tightened them.

The new protection ordinance in Saxony says: If there is a persistent 7-day incidence of at least 200 new infections, an exit restriction applies in the respective district or the affected city. The residents are then only allowed to leave their apartment in exceptional cases, for example to go to work, to go shopping or to go to school. Sports and leisure activities are only allowed within 15 kilometers of the place of residence. In addition, there is a ban on alcohol in public places. There should only be exceptions for the holidays.

Kretschmer appealed to the citizens to support the necessary major restrictions and to adhere to them. “We need more caution. There is no reason for hysteria, but also not to gloss over”, said the Prime Minister. Because: “If things don’t work out, there is only a complete lockdown. To avoid that, we have to get down from the number.”