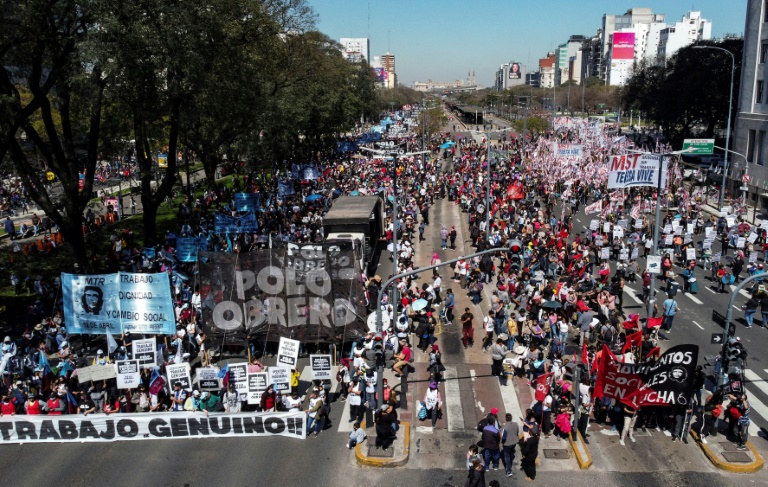 Several tens of thousands of people demonstrated in Buenos Aires on Thursday to demand better living conditions, in the midst of a government crisis due to tensions within the majority of center-left Peronist president Alberto Fernandez.

The call to demonstrate was launched by left movements that mobilized many Argentines from working-class neighborhoods of the capital, noted an AFP journalist. They are calling for more help to deal with the consequences of the coronavirus pandemic.

“I am neither for nor against the government (…) We want to work, we want factories,” Gisela, a mother of three, from the southern suburbs of Buenos Aires, told AFP.

Peronist movements had initially called for demonstrations in support of the head of state in the afternoon in front of the Casa Rosada, the seat of government. Mr. Fernandez finally asked them to abstain in order to lower the tension.

“We must give answers, honoring the commitment we made in December 2019 to society. Now is not the time to raise disputes that distract us from this path, ”Fernandez wrote on Twitter.

Alberto Fernandez, in power since the end of 2019, is facing a crisis within his own government, after the electoral setback of his majority during the party primaries organized for the legislative elections of November 14.

The system of general primaries for all political parties, on the same day and at the national level, is an Argentine peculiarity. Since voting is compulsory, these primaries are a full-scale barometer before a poll.

On Wednesday, five ministers close to Vice-President Cristina Kirchner tendered their resignations. At this stage, the Head of State was careful not to accept them.

“I am here to officially inform you that the president of the nation, Alberto Fernandez, has not accepted any of the resignations presented,” Vilma Ibarra, head of legal affairs at the presidency, told reporters, adding that the head of the ‘State would take a decision in due course.

The initiative of the five ministers is interpreted by analysts as a form of pressure from the former Argentine president (2007-2015) on the head of state to obtain a cabinet reshuffle from him.

Public discontent with the government continues to grow in a country in recession since 2018 where GDP fell 9.9% in 2020 due to the pandemic.

On Sunday, the ruling coalition won less than 31% of the vote against 40% for the center-right coalition of former President Mauricio Macri (2015-2019).