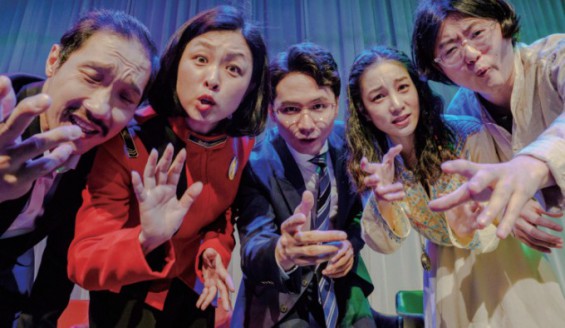 In 2041, South Korea is six months away from launching its first manned lunar probe, the Chiri. The launch of the Chiri is considered an opportunity for South Korea to play a part in the fierce space race between countries around the world. The ground is also not flat. Climate change is accelerating. Vulnerable groups such as starving children and recipients of basic livelihood still do not receive sufficient support. Among them, an open discussion was held on whether it would be appropriate for Korea to put limited resources into space development.

This is the background of the play ‘Six Months Before Launch’, which took place from June 15th to 26th. This play, the second work of ‘Alien Workshop’, a theater company specializing in science performance, captures the appearance of a discussion held through a hologram in the metaverse. Debaters are scientists, politicians, human rights group representatives, and environmental activists. Korea in 2041. No, what choice should Korea make in 2022? The audience contemplated while breathing with the actors for an hour and a half.

Are you in favor of space exploration? the audience decides

The play ‘Six Months Before Launch’ by the Special Science Theater Company’s Alien Workshop was performed at the Yeonhui Arts Theater in Yeonhui-dong, Seodaemun-gu, Seoul. In this play, which was an audience-participating performance, the audience’s discussion took place with the host of Juboom Alien Workshop, who took on the role of the host. Provided by an alien workshop

On the evening of June 22, I went to Yeonhui Arts Theater in Yeonhui-dong, Seodaemun-gu, Seoul to watch ‘Six Months Before Launch’. “It’s a science play, but it’s okay, it’s not boring,” and I came to know about it at the recommendation of a junior. Even so, as it is a science play, the audience entered the theater thinking that it would be mostly children, teenagers, and their guardians. I wanted to show science in rockets and common sense about the moon using cool props. It wasn’t.

The audience was full of young people in their early to mid 20s. The props on the stage were five chairs, a screen, and a spaceship model. The play, which lasted about an hour and a half, consisted of only dialogues between actors. Complex information such as Space X and biodiversity was constantly discussed. Still, the audience was engrossed. Even after laughing with the actors, when the actor who played the host asked the audience for opinions on space development, they actively discussed it. It was an unfamiliar sight. I was curious about the secret to making a science play that everyone can enjoy comfortably.

In order to dig up trade secrets, on June 30th, members of the Alien Workshop were invited to the headquarters of Dong-A Science in Yongsan-gu, Seoul. CEO Joo Boom, planning Kang Shin-cheol, actor Kim Jin-seong, and assistant director Jo Su-ah participated in the interview. When asked how a science play can be fun, Kang said, “The word science play itself is mainly used to introduce scientists to it, and to the general public it is just a play.” “When people hear the word science, the first thing that comes to mind is education, and they feel pressure to learn what they need to learn, and to find and understand the educational aspect.”

For the alien workshop, science is not something to learn, but something to enjoy. Planning Kang cited the recently popular drama ‘People of the Korea Meteorological Administration: The Cruelty of In-House Dating’ as an example. He said, “It’s a drama set in the Korea Meteorological Administration, so the terms used are difficult,” he said. He then introduced, “I want to tell the story of people using science as a material.”

Their intention is revealed in the subtitles of the works. Six months before the launch, the subtitle was ‘What to choose’. Planning Kang said, “This work started from the question of ‘Maybe people’s selection criteria are in something other than scientific evidence'”. To answer this question, the beginning of the work shows scientists discussing rational grounds. In the second half, provocative and violent non-debate elements that are easy to disturb the public’s decision-making process appear to enhance the fun of the play.

The audience directly participates in the pros and cons to contemplate the direction in which science should develop. At the end of the performance, votes for and against space development are held. The end of the performance will change depending on the voting results. Planning Kang said, “I read the reviews that I saw myself constantly pondering and pondering after the play,” he said.

CEO Joo Boom (center) and actor Kim Jin-seong are putting on the makeup of ‘Quantum War’, the first work of Alien Workshop. On the left is a plan by Kang Shin-cheol, who was in charge of planning and science-related advice for the work. Provided by an alien workshop

Is a play dealing with quantum mechanics interesting?

Meanwhile, the subtitle of ‘Quantum War’, the first work of Alien Workshop, is ‘What is Real’. Set in the 5th Solvay Conference held in Belgium in 1927, it contains the conflict between Einstein, Bohr, Heisenberg, and Schrödinger. Those who were the best scientists of their time fight over how to accept the newly emerged quantum mechanics. “I wanted to show that science is not absolute and changes,” Kang said.

It’s okay if you don’t understand quantum mechanics. “I remember seeing her mother holding her child’s hand and trying to leave while the performance was in full swing, but she did not want to leave,” Kang said.

“I think the child’s mother was trying to understand the theory of quantum mechanics in the play. However, she couldn’t understand because quantum mechanics was difficult, and she thought it would be difficult for a child, so she left. But she didn’t see a child trying to understand her play. The conflict between her characters must have been interesting. We felt that we were right in thinking that the burden of seeing and understanding the differences between parents and children who came to see a play was a barrier to enjoying science culture.”

A lot of people don’t like science. If you give a reason, say that your school science grades were bad. Kang Eun-young, who majored in physics education, said, “I remembered a science play while thinking about how to do it because I feel sorry for students who say that scores are their preferences.” Meanwhile, CEO Joo, who was originally a mechanical engineer, fell in love with indie music in front of Hongik University and became a musician. He formed a band and released an album under the name of ‘Newton’s 3rd Law’.

Jin-Sung Kim majored in Materials Science and Engineering and has been working in science for nearly 10 years. He lived a smooth, flowing life. But as time went on, he hated science more and more. After three years of working as an engineer, he quit and began to learn his acting. As soon as he left the company strangely, science was so much fun. He talked about science with his friends and also subscribed to the science YouTube channel.

CEO Joo said, “The first thing I made was a short 20-minute play. He went to school and re-edited a short play that had been performed in the form of a busking into a feature film, and released Quantum Wars as the first work of the Alien Workshop last year.

I spent the whole night rummaging through the papers and writing the script.

The hardest part was balancing scientific depth with the fun of the play. Actor Kim, who was in charge of the screenplay and acting, CEO Joo, who was in charge of music and acting, and Planning Kang, who was in charge of planning and science-related advice, all struggled with this. In particular, the theme of the first work was the 5th Solvay Conference, which left a big mark in the history of science. Since the majority of the audience would be interested in science, we could not make concessions in terms of content.

Actor Kim said, “The internet is really good these days, so writing is really good.” He smiled and said, “For content that requires professionalism, I search overseas materials such as thesis.” He continued, “I was really happy when I wrote the first script,” he said.

There was also collaboration with experts outside the theater company. CEO Joo said, “There are already many people who are working hard to spread the science culture. Next, Kang said, “The strength of the Alien Workshop lies in that it is composed of science majors and can communicate with experts smoothly while having an understanding of scientific concepts.”

The first work was a success. It doesn’t mean that you became rich with your earnings. The audience who saw the quantum war became a new colleague. Jo Soo-ah, assistant director, said, “I watched the quantum war from the audience’s point of view in November last year. He continued, “I was shocked by the fact that the part that I had left out because I thought it was difficult to write a play was interesting in the bilateral war.”

Director Joe, who was a freshman at the time, sent an e-mail to the Alien Workshop because he wanted to work with him. After he took a leave of absence from school, he worked as an assistant director. CEO Joo said, “I was so happy that we thought that the path we were taking was not wrong.”

In the play ‘Six Months Before Launch’, the secrets of the characters are revealed toward the second half, and the direction of the discussion that was based on scientific facts is disturbed. It was used as a device for the audience to reflect on their selection criteria for social issues. Provided by an alien workshop

On the other hand, there are concerns. Planning Kang said, “Science theater gained popularity by touring the country in the 2000s, but it is a culture that has not been maintained since then. “Ultimately, the plays we make must be able to compete with existing plays,” he said.

Eventually it goes back to the starting point. We should ask how we can enjoy science culture without educational purpose. CEO Joo said, “Recently, the performance industry itself is making many attempts to close the gap between the audience and the stage, which has been customary in the past.” The tendency of the audience is also the tendency to want to express themselves more. In line with this, the Alien Workshop also introduced a method of lowering the entry barriers for the audience, such as discussion and voting, as it did six months before the launch.

Director Joe said, “In the case of six months before launch, we talk about topics that we usually thought about a lot, but did not have a chance to talk about, such as environmental issues. did.

When they saw a science club in a high school office where they went to perform a short 20-minute play, they said, “I wish we could have an interview here too.” CEO Joo said, “It’s strange to be interviewed by a science club because it’s a medium that all members have enjoyed. He continued, “If you want to be part of an alien operation, please feel free to contact me. I’m ready to talk.” The official mail of the alien lab is [email protected]

A scene from ‘Six Months Before Launch’, in which astrophysicist Professor Inara Ina and biologist Bomin Woo are arguing over space development. Provided by an alien workshop