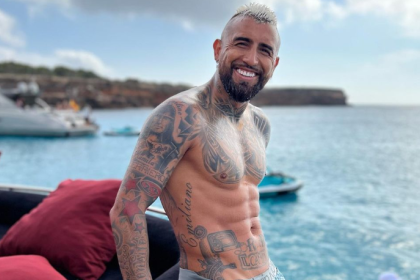 Arturo vidal could have a lousy reception this Wednesday on behalf of the Sports Tolima. The former Bayern Munich, Juventus and Barcelona player came to Rio de Janeiro to conclude the ongoing negotiations with the Flamengo.

“I am happy to be here. It is a very nice moment. We are here in talks, we are still in talks,” said a smiling Vidal in statements to the press after landing at the Galeao international airport.

The 35-year-old Chilean international was received by a group of Fla fans, as well as by the vice president of the Rio de Janeiro club’s football division, Marcos Braz.

The star revealed that he will see in the maracana the match between Flamengo and Tolima, for the return of the Copa Libertadores Round of 16. “I’m going to watch the game as a Flamengo fan, I hope I win“, he commented.

Precisely the pijao team can ruin the arrival of the renowned soccer player in Rio de Janeiro, since if he wins, Vidal will be left with the desire to play the Libertadores (the series goes 1-0 in favor of the Brazilians).

According to the Brazilian press, the signing of the midfielder trained at Colo Colo is a fact and it is expected that he will pass the medical examination and adjust the last details of his contract, which is expected to last until December 2023. However, the team has not yet He will make it official, since Vidal still has to resolve some procedures to terminate his relationship with Inter Milan, where he has played the last two seasons.

His arrival at ‘Fla’ would add muscle to a midfield that has just lost the Belgian-Brazilian Andreas Pereira, who, after a year on loan, returned to Manchester United and could be sold to Fulham, also from England, according to the British press.

The most popular team in Brazil has not finished starting this 2022 season. Currently, they are eighth in the Brazilian Championship, which they last won in 2019 and 2020, eight points behind the leader Palmeiras. In the Brazilian Cup they lost 2-1 to Atlético Mineiro in the first leg of the round of 16, while in the Libertadores they suffered more than expected against Tolima.