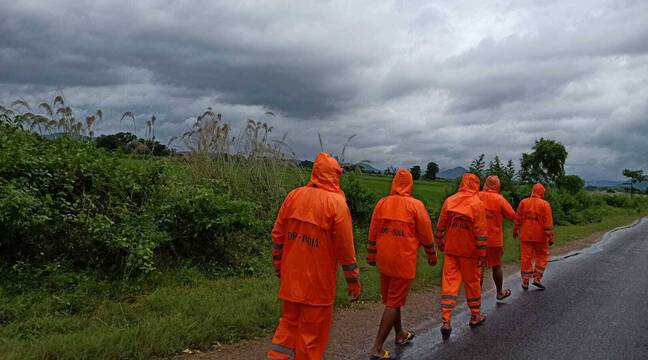 Gulab killed in India and he is still rife. Two fishermen were killed in the passage of this cyclone, which has hit since Sunday in the east of the country accompanied by strong winds and heavy rains, causing the evacuation of tens of thousands of people.

The cyclone made landfall between the coastal states of Odisha and Andhra Pradesh just after 6 p.m. (2:30 p.m. in France), with gusts of up to 95 km / h, the Indian meteorological department said. The two fishermen died as a result of capsizing their boat. Three other fishermen managed to swim to shore and a sixth person on the boat is still missing, according to the newspaper Indian Express.

A risk of sudden flooding

Coming from the Bay of Bengal, the storm is accompanied by “extremely violent rains”, according to the meteorological office, which warned of a “risk of sudden flooding in certain regions”. The intensity of Gulab, however, should decrease “in the next few hours”.

There were also reports of uprooted trees in the coastal district of Andhra Pradesh, where some 110,000 families have been moved to temporary relief shelters in the state. Preventively, the authorities of threatened states had asked people living near the coast to fall back to shelters and hundreds of rescuers were sent to the region.

Authorities in West Bengal, north of Odisha, have said they too will take precautions, although the state should not be affected directly. “We have already evacuated more than 20,000 people in schools and government buildings turned into cyclone shelters,” said one of the state officials, Bankim Hazra.

The northern Indian Ocean is more and more regularly and severely hit by cyclones, a phenomenon that scientists attribute to global warming. In May, Cyclone Yaas, with gusts of up to 155 km / h, left thousands of Indians homeless behind and killed at least 20 people. Damage had amounted to more than two billion dollars in Odisha, West Bengal and neighboring Bangladesh.