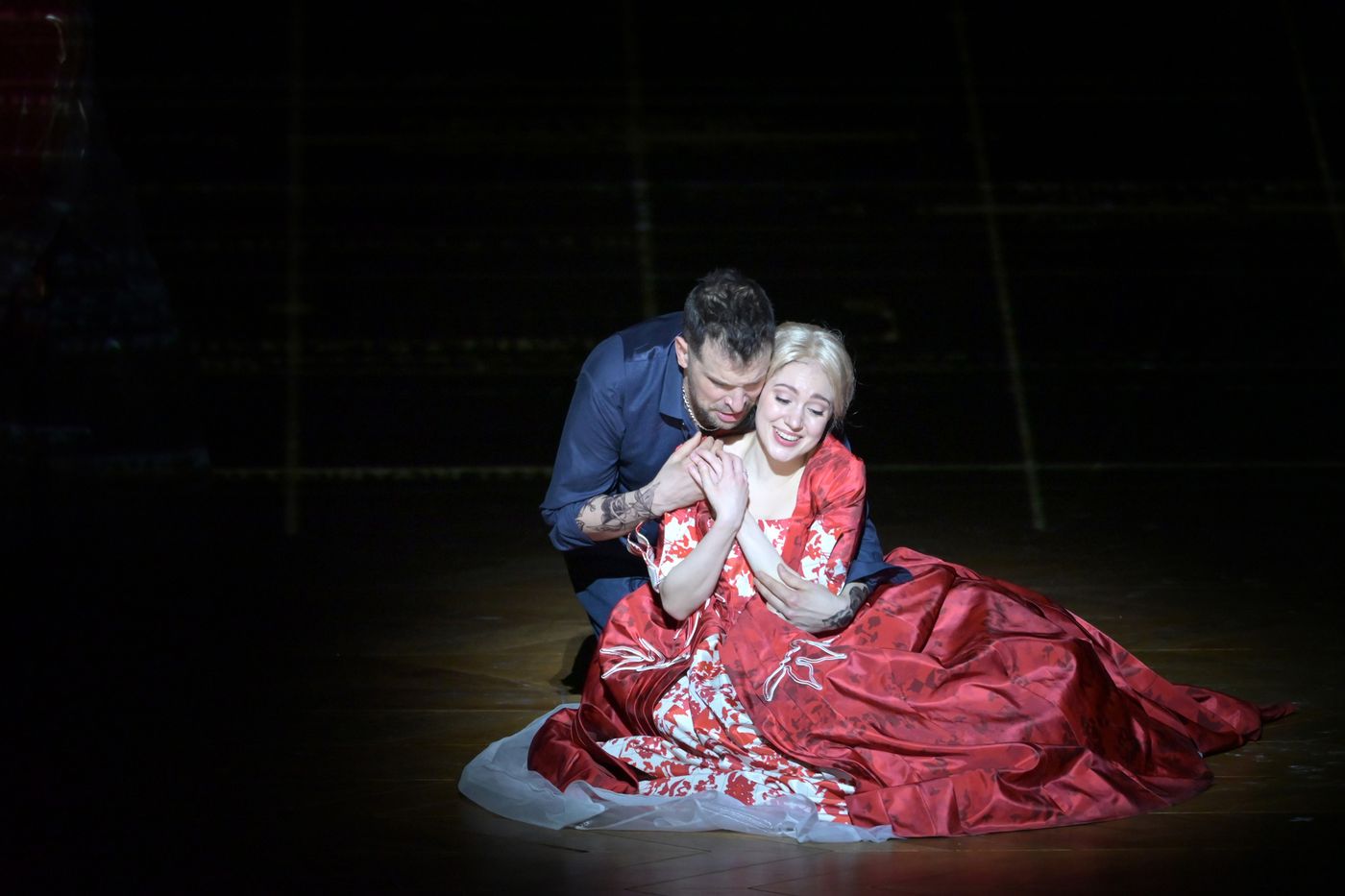 Placer The Marriage of Figaro, opera more than perfect dramatically and musically, behind the scenes of an opera house; make Count Almaviva its star director, Suzanne a dresser, Figaro a props man, Basilio a vocal coach, and the castle staff a gallery of choristers and ballerinas… the idea should not shock even the supporters of bets in literal scenes. Especially since the social games and, even more psychological, which are woven between the characters, their differences in status and their power relations find a convincing parallel in the very codified universe of the show.

Nevertheless The wedding ask, even demand, that the most intense life, joy and melancholy, tenderness and cruelty hold a permanent festival there, sustained by the sequence of recitatives to arias, arias to ensembles, ensembles to finales.

Netia Jones understood this well, placing her scenography under the sign of the time that slips through your fingers. The duet between Suzanne and Chérubin in Act II is thus visualized by the countdown of a digital clock: barely more than a minute to get the young page out of one of those delicate situations where his adolescent emotions precipitate him more often than not!

“The Marriage of Figaro” directed by Netia Jones at the Opéra Garnier places the play behind the scenes of an opera house. / Vincent PONTET/ONP

But the severity of the sets with angular lines – appearing dressing rooms, workshops, backstage –, the charmless costumes and the direction of the somewhat dull actors do not allow the idea to be embodied, to vibrate or to make us vibrate. It essentially lacks the interaction between the characters, in the comic as in the sadness, in the confrontation as in the complicity. It will be necessary to wait for the beginning of Act IV for the distress of the young Barberine and the painful amazement of Marceline (who, however, has seen others!) do not bring out the emotion. Too briefly.

Where is the grain of madness?

Fine, elegant, attentive to the virtuoso chants and counterchants of the orchestra, to the alchemy between oboe and bassoon, to the voluble repartee of the second violins, to the poetry of the pizzicati, the direction of Gustavo Dudamel also remains somewhat in sickness of abandonment and madness. Perhaps the few discrepancies between the pit and the stage at the start of the performance, and the softness of certain string attacks prompted the conductor to favor “security”? As we often see, the premiere of a show (which is moreover abused by uncertainties and health constraints) is generally neither the best nor the most liberated.

Modified by the Covid, the voice cast has the immense merit of offering excellent supporting roles, starting with the carnivorous Bartolo by James Cresswell, the cunning Basilio by Michael Colvin, the brash gardener Antonio by Marc Labonnette and the Don Curzio, nasal notary played by Christophe Mortagne: in the dazzling sextet of Act III, his musical and theatrical alliance of circumstance with the count becomes particularly delectable!

Among the protagonists, we remain deliciously frightened by the rich, deep, crackling vocal charisma of Peter Mattei and well convinced that, the curtain down, his repentant Almaviva will immediately find his donjuanesque addiction. The friendship of yesteryear with Figaro, to which Luca Pisaroni brings his intimate knowledge of the role despite a slightly extinct voice, belongs to a bygone past.

→ CRITICAL. At the Paris Opera, the musical poetry of Gustavo Dudamel

Lea Desandre offers her lovely voice to the thrilling Cherub, while Maria Bengtsson’s Countess, embarrassed here and there by a somewhat shortness of breath, has on the other hand pure and luminous high notes and a very human fragility which contrasts with the assurance mischievous and the musical solidity of Anna El Khashem’s Suzanne. The young soprano (born in 1996) certainly lacks breadth but we imagine that she has not yet fully spread her wings. The Paris Opera has also entrusted him with the role of Zerline in Don Giovanni, Mozart again, from February 1st…

Several injured in an attack in a university amphitheater