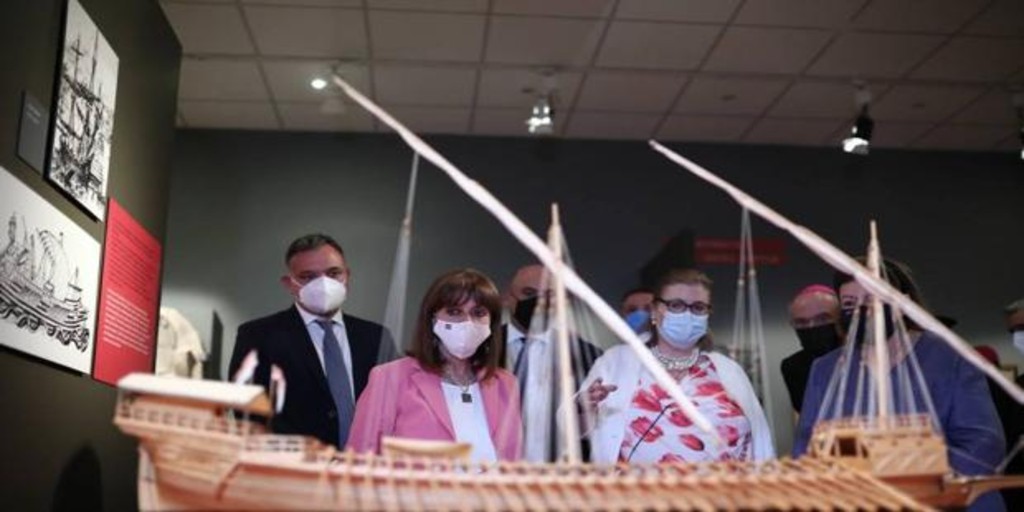 ‘Lepanto 1571: 450 years since the greatest victory of the Christians’ is the title of the new exhibition at the Byzantine Museum in Athens. It was inaugurated this Friday by the President of the Greek Republic Katerina Sakelaropúlu, in the presence of the Minister of Culture Lina Mendoni and the director of the Museum, the archaeologist Katerina Delaporta.

The exhibition is part of the Museum’s program to celebrate the anniversary of the 200 years from the Greek Revolution of Independence and according to Minister Mendoni, the battle of Lepanto was one of the most important events in its background.

The so-called ‘greatest victory of Christians’, the phrase that gives the exhibition its title, is the main theme of the historical objects and works of art from museums and public and private collections in Greece, such as the Pinacoteca, the War and Naval Museum, the British Archaeological School in Athens, the Historical Museum, the private collection of Thanasis Martinos, Mixalis Skoúlos and Spyros Gautsí. Archival material from European museums and libraries is also on display including the Simancas Archive, the Maritime Museum of Barcelona and El Escorial.

Katerina Delaporta, the director of the Byzantine Museum, underlined the importance of the Battle of Lepanto, which went down in history as “the day of the victory of the united Christian fleets of the Holy League of Europe”, one of the biggest naval battles in the world then and an essential reference of European and Mediterranean history ». And he also recalled the battle of Navarino in 1827, which was fundamental in the revolution for Greek independence.

Many Greeks on both sides

The Minister of Culture recalled for her part that this battle of Lepanto (that in Greek it is said Nafpaktos) in the Gulf of Patras between the Holy League against the fleet of the Ottoman Empire was one of the greatest naval battles of all time. Few know what he highlighted: that many Christian ships were equipped by wealthy Greeks from Crete and the Ionian Islands, while Greek volunteers were part of many crews. There was also Greeks forced to enlist in the Ottoman fleet, with which there were many who died or were injured on both sides. And he recalled that the great victory of the Allies “was greeted with enthusiasm in Europe and was immortalized by great painters of the time ”, reviving“ the morale and hopes of the enslaved peoples of the Balkans, who believed that with the help of the Christian West they could shake off the ottoman yoke».

And he highlighted what Cervantes recognized: that “that day the belief that the Turks were invincible at sea was dissolved throughout the world”, something that would become a important legacy.

The ambassador of Spain Enrique Viguera, who was accompanying President Sánchez at the Euromed meeting that took place at the same time at the Niarchos Foundation in the capital, was unable to attend but stressed that his support and help was essential for this exhibition. The diplomat Emilio Vilanova represented him. Also present at the inauguration was the Catholic Archbishop of Athens, Monsignor Sevastianos Rossolatos, since many Greek Catholic churches possess objects from or related to this naval battle.