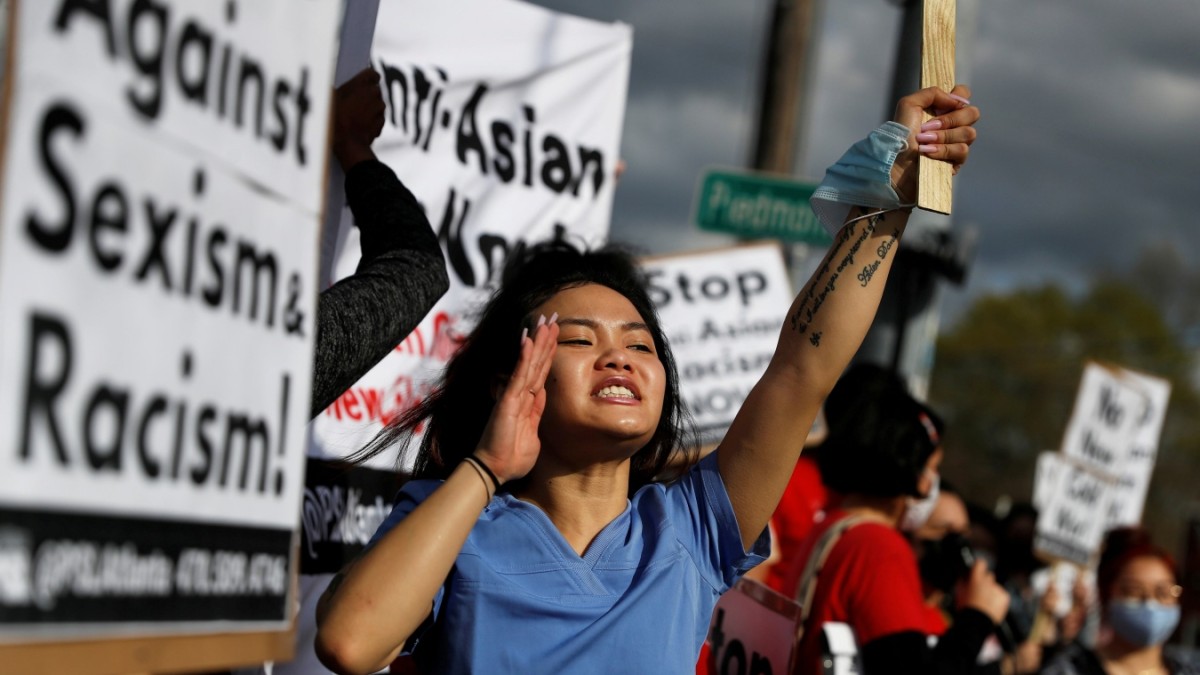 As of Wednesday, Atlanta’s bloody deed seemed seamless in the list that is growing every day of rampages and mass murders in the United States. One of nearly 100 crimes of this type since the beginning of the year, resulting in more than 110 deaths. Three days later, however, this crime is perceived as a national tragedy. And that doesn’t just have to do with the fact that, with eight dead, it was the worst killing spree in this young year. What sets this act apart from the many others is that the alleged shooter was a white male and six of the eight victims were women of Asian background.

On Thursday, US President Joe Biden lowering flags at federal buildings across the country to half-staff by Monday. As a “sign of respect for the victims of this senseless act of violence,” Biden said in writing. He has changed his travel plans for this Friday. Instead of promoting his $1.9 trillion coronavirus relief package with his Vice President Kamala Harris in Georgia, they met with representatives of the American-Asian community. “We have to change our hearts. Hate can’t have a safe haven in America. It has to stop,” Biden said after the meeting. He called for discrimination and racism not to be left unchallenged. “Because our silence makes us accomplices. We must not be accomplices.” Racism is an “ugly poison” that has haunted the United States for too long.

The alleged perpetrator is 21-year-old Robert L. from Woodstock, a half-hour drive from Atlanta. He is said to have entered three so-called “spas” in Atlanta and the surrounding area one after the other early Tuesday evening. These are brothels declared as massage parlors. In Georgia, these are tolerated because the core offering, massage, is legal. In the affected brothels, it is mainly women of Asian origin who offer their services.

So far, we can only speculate about the suspect’s motives. The police had initially reported the act as a “running robbery”. But it’s probably more complicated. According to his own testimony and that of various witnesses L. is said to be suffering from a sex addiction in connection with severe guilt complexes. He is described as a highly disturbed man who reacted to masturbation and his own visits to brothels with rampant fantasies of self-punishment. “This is the type of man who hates when he masturbates, who thinks it’s pathological,” said a former roommate about him. On the other hand, he also hates the sex industry. “He felt used by her, abused.”

Anxiety in the American Asian Community

In the political sphere, the act is primarily being debated as a possibly racially motivated act against Asian-American citizens. Not least fueled by Jay Bakerto the now suspended speaker of the Cherokee County Sheriff’s Office. In a first public statement on Wednesday, he stated that he did not assume a racist motive. Rather, L. was “rather exhausted” because of his sex addiction. Baker: “Yesterday was a really bad day for him.” A phrase that caught the ear of many Asian Americans, as if their lives didn’t count.

Shortly thereafter, an irritating Facebook post by the police officer became public. In it, Baker advertises T-shirts that describe the corona virus as “imported from China”. “I love my shirt,” he wrote. Which caused new outrage.

Such statements get to the heart of the fear that has been plaguing the US-Asian community since the pandemic began. It also led to members of this group demonstrating in Atlanta, Washington and New York after the crime. Former US President Donald Trump had drilled into his supporters until the end that the corona virus was a “China virus”, a “Wuhan virus” or simply a “Kung Flu” (flu is the English word for flu). As if the virus had a nationality.

White House spokeswoman Jen Psaki paid attention Thursday, not to impute any motive whatsoever to the suspect. But she said there was “no doubt” that Trump’s rhetoric “has increased the threat to Asian Americans.”

That also shows a study by California State University, San Bernardino. In New York City, for example, a city with a large Asian population, there have been at least 28 racially motivated acts against people of Asian descent in the past year. In 2019 there were three cases. Across the US, their numbers have increased by 150 percent.

Helen Kim Ho, founder of the advocacy group Asian Americans Advancing Justice-Atlanta, is not surprised by the numbers. “We are not really considered Americans, we remain foreigners”, she said Washington Post. In addition, there is an overly sexualized image of Asian women in society. “All of that must have played a role in this man’s mind.” The suspect must not have been aware of the racist motive for the crime. It may still have played a role.

Are car buyers too lazy for software updates?