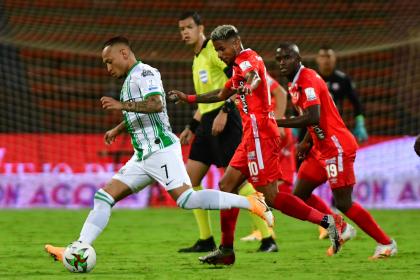 Atlético Nacional ended up eliminated from the Colombian League after falling 0-3 at the Atanasio with América de Cali in one of the weakest games of the year. As happened in Uruguay against River Plate, in the return match the team made mistakes that cost them to leave empty-handed after a convulsed year. Here are five aspects of the green debacle.

Fissures in defense: Despite leaving with four youth, of which two were debutants in the professionalism, Nacional again showed that disorder in the rear that cost him points. Especially as a local, the right, left side of America was a walk where the scarlets generated two of the three goals of the match.

The experienced players did not weigh in: seven experienced players made up Nacional’s roster on Saturday night at the Atanasio: Helibelton Palacios, Jorge Segura, Baldomero Perlaza, Jarlan Barrera, Vladimir Hernández, Andrés Andrade and Estéfano Arango. These players did not know how to give the youth peace of mind that, in some cases, it was their first game and in others, they just started their professional career in 2020. The team did not have cohesion, it was very divided and through those spaces, America took advantage . Among the lowest points: Helibelton, Segura who was relieved before halftime and Arango, who again had a clear chance, in hand-to-hand, but threw it at the goalkeeper’s body. Andrade, to the limit, was again the most outstanding of the experienced ones.

Numerical inferiority: From minute 41, Nacional was left with 10 players and that made the development of the game difficult. Despite the fact that the rival in the complement also lost a player, in that equality he also did not manage to get poised on the pitch.

Little definition: In the first half, before America’s goal, Nacional generated two goal options to send the game to the ‘freezer’: at 35 seconds and at minute 9, curiously in the second option, the play for the goal arrived of Duván Vergara, when they did not react after the loss of the ball. With the adverse score, things became more difficult, although they generated options, but with less clarity.

A lazy local: Since 2018, the Atanasio stopped being a hostile place for those who visited it and many teams came out with points, classifications and titles. Nacional has lost that strength that they had playing in their stadium and although there was no audience in the stands, they do not find the confidence that if they could be seen in some games playing away from home. It is one of the aspects that they should work on thinking about a better 2021. Being a team that solved games in the ‘colossus of 74’.