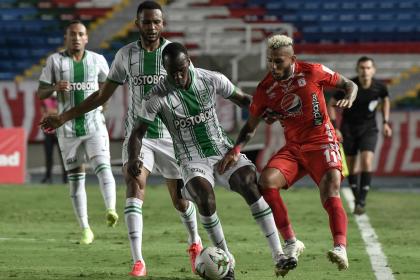 Atlético Nacional has its sights set on the local championship and one of the tickets to the semifinals of the 2020 BetPlay League will be played against América de Cali. The advantage is held by the purslanes, thanks to the 2-1 in favor obtained in the game of first leg of the quarterfinals, played at Pascual Guerrero.

However, despite the fact that the purslane team is focused on the 2020 campaign, with the departure of Juan Carlos Osorio from the technical direction, and the position assumed by Alejandro Restrepo for the remainder of the year, in the surroundings of the Antioquia team There are already talk of possible candidates to occupy the green bench in 2021.

Precisely, one of those names that has gained strength to occupy this position is that of Alexandre Guimarães, a 51-year-old Brazilian coach, who was able to become champion with América de Cali in 2019, and who had to leave the scarlet institution this year to cause of the pandemic.

With the strong rumor afloat, there are several players who have been linked with the green team for the following season, in the event that Guimarães is signed, and in this context, in the VBar program of Caracol Radio, the journalist Diego Rueda mentioned that the nationalized Costa Rican coach would ask Michael Rangel, Luis Paz and Matías Pisano for the team, in case he is hired.

It should be remembered that Guimarães knows these three players very well, since he had them in América de Cali and was crowned champion of the League with them.