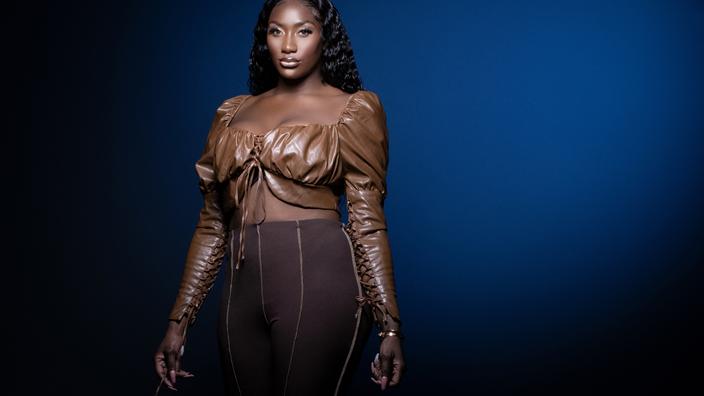 The singer will be the first French artist to offer an interactive experience in the famous video game.

Even the “Frenchies” are getting started. After American celebrities like rapper Travis Scott or singer Ariana Grande, it’s Aya Nakamura’s turn to take over the famous Fortnite game. His record company, Warner Music France has just signed an unprecedented partnership with Epic Games to participate in the launch of the “Soundwave Series”, an event that will see five international artists perform: the Egyptian Mohamed Hakami, the Australian Tones And I, Brazilian rapper Emicida and Japanese pop artist Gen Hoshino, in addition to Aya Nakamura.

«It will be the first French artist to offer an interactive experience of this type in Fortnite“, Indicates the record company in a press release. Epic Games has yet to release the date or details of the virtual event.

Aya Nakamura certified platinum disc and made famous by her hit Djadja, was probably not chosen at random. Above all, she touches a young audience and her fame goes far beyond French borders: she is indeed the most streamed French female artist in France and internationally. In 2020, it had thus obtained a diamond disc for export. And the magazine Forbes elected her in 2021 “Francophone artist of the year”.

A nice blow for Warner Music France. ” Gaming is one of the many areas of diversification and development on which Warner Music France is actively working in order to offer its artists ever more innovative support. », Declared Alain Veille, its new president. For his artist, it is in any case a great spotlight.

The arrival of Aya Nakamura in Fortnite is one more sign in the desire of its creator Epic Games to make its virtual world more than a simple video game. Before the French singer, other international artists made an appearance within the platform. DJ Marshmello led the way in 2019, with a virtual concert lasting ten minutes, accompanied by a “skin” (virtual clothes for the player’s avatar) and an “emote” (dance steps) to his image. Rapper Travis Scott followed in 2020, with a performance watched live by over 12 million people.

The American superstar Ariane Grande was the last music personality to take part in the exercise of the virtual concert on Fortnite. His representation, or at least that of his pixel alter ego, was broadcast five times between August 7 and 9 in order to adapt to as many time zones as possible. Once again, fans of the singer were able to purchase “skins”, items and “emotes” related to Ariana Grande’s universe.

Go to Fortnite is in the process of integrating promotional tours of celebrities, as well as being invited to TV shows. In September 2020, the K-pop group BTS chose this video game to preview the music video for their song Dynamite. Even the Brazilian footballer Neymar became in April a “skin” to collect, in order to evolve in the world of Fortnite in the guise of the star of PSG.

Epic Games continues to multiply these prestigious partnerships which, in addition to the world of music, also affect that of cinema, sport and pop-culture. They are winners for both parties. The American publisher wants to make its game a full-fledged entertainment platform, where players connect to compete, but also discuss, exchange, attend concerts or film screenings. These are the first stones of the “metaverse” that Epic Games calls these wishes, a virtual world parallel to ours. This also immediately allows people to talk about Fortnite and to renew the public’s interest in this free platform which is paid handsomely with the sale of virtual objects.

Read also“Metaverse”, the dizzying future of the internet

The operation is also interesting for the artists’ income. According to Forbes, the concert of Travis Scott in Fortnite earned the artist $ 20 million, a sum that includes the sale of merchandise. It is very likely that the artists in the game will earn a percentage from the sale of items, “skins” and “emotes” bearing their likeness. Another consequence for Travis Scott: listenings to his albums have skyrocketed on streaming platforms. It is likely that Aya Nakamura, thanks to her future performance in Fortnite, also succeeds in reaching new listeners.