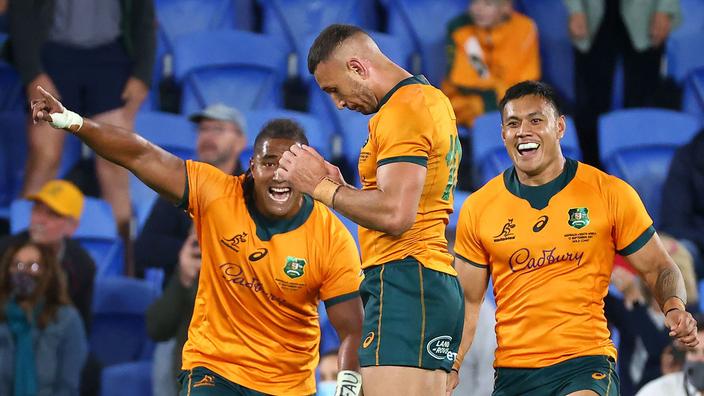 Australia won on the wire (28-26) at home against South Africa on Sunday, thanks to a great performance from its famous opener, back in the selection after four years of absence.

Back to the fore! Four years after his last selection with the Wallabies, Quade Cooper was the hero of the Australian victory at the expense of the South African world champions, 28 to 26, this Sunday as part of the Rugby Championship.

The opener, author of an impeccable 8 of 8 against the poles, scored the penalty of winning in stoppage time. To finish with 23 points on the clock. The 33-year-old gave his team, led 26-25 at Siren, the victory with a 40m penalty in the 80th + 2 that freed spectators at the CBUS Super Stadium in Gold Coast, eastern town from the country.

Three of the game’s four tries were scored in the two shorthand periods, with two yellow cards on each side. In the wake of the yellow card received by Springboks captain Siya Kolisi, Andrey Kellaway scored a try after a hook and a jump pass from Samu Kerevi on the first real Australian offensive (17th).

Bis repeated with Bongi Mbonambi’s try for South Africa after Matt Philip left his partners at fourteen (28th) and in the second period Malcolm Marx scored when Folau Fainga’a was on the bench (59th).

After the two defeats against the All Blacks, Australia opens its counter but remains six points behind its opponent of the day, before the return confrontation next Saturday in Brisbane (9:05 am). The South African world champions meanwhile are second in the Rugby Championship and point despite this five-point loss to the All Blacks, while Argentina is last with three losses.