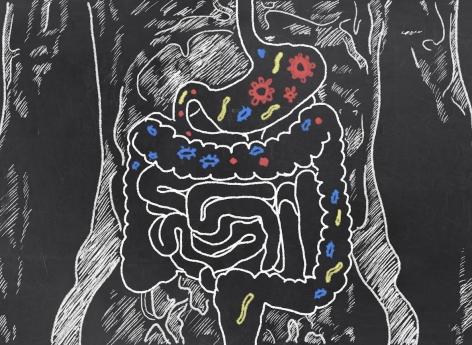 Sleep is a complex process. And this essential phase for the organism is too often abused because of our rhythms of life. However, it is during sleep that our body regenerates, that our memories are fixed, that our organism updates to better face a new day. Researchers at the University of Tsukuba (Japan) have discovered that our sleep is also dependent on bacteria and microorganisms in our digestive tract, because they are the ones that regulate serotonin, essential to maintain a good circadian cycle. The results of their research were published on November 11, 2020 in the journal Scientific Reports.

The interest of microorganisms in our microbiota

To fully understand the situation, the researchers gave the mice antibiotics for four weeks. While antibiotics are known to help our bodies defend themselves, they can also kill certain bacteria present in our digestive tract, which weakens the microbiota.

The researchers compared the intestinal contents of these mice freed from these microorganisms with that of control mice having the same diet. During digestion, food breaks down and becomes metabolites, or small molecules. “We found over 200 differences in metabolites between groups of mice. About 60 normal metabolites were missing in mice lacking microbiota, and the rest differed in quantity, some more and some less than in control mice.”, Says Masashi Yanagisawa, professor at Tsukuba University.

Once this observation was made, the researchers tried to understand the usefulness of these metabolites. By analyzing the enrichment of all metabolites, they discovered that the biological pathways most affected by antibiotic treatment were those involved in the manufacture of neurotransmitters. Thus, the tryptophan-serotonin pathway was almost blocked in mice lacking microbiota. This shows that without the proper gut microorganisms, the mice could not produce serotonin from the tryptophan they ate. Likewise, these mice were deficient in vitamin B6 metabolites, which accelerate the production of serotonin and dopamine.

Finally, the mice were subjected to an electroencephalogram, in order to see their brain activity during their sleep. Compared with the control mice, the paradoxical sleep of rodents without microbiota was more disturbed. The number of REM sleep episodes was highest during the day and night, while the number of non-REM sleep episodes was highest during the day. In other words, mice devoid of microbiota alternated sleep / wake phases more frequently than others.

“We have found that the depletion of microbes eliminates serotonin in the gut, and we know that serotonin levels in the brain can affect sleep / wake cycles., souligne Masashi Yanagisawa. So, changing the microbes in the gut by changing the diet can help those who have trouble sleeping..”