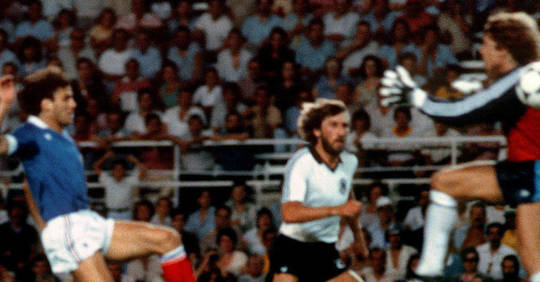 They have made themselves detestable in the eyes of the football world by their incessant provocations, their violent behavior. From Roy Keane to Diego Costa, including Paolo Di Canio, Vinnie Jones, Luis Suarez, Pascal Nouma, Cyril Rool, Harald Schumacher or Marco Materazzi, Bad Boys tells through an exclusive and uncompromising documentary the scarred destinies of these emblematic personalities, between sporting prowess and heightened violence.

“The pain is in the head”

What is a bad boy? How do we become? What does this bring to the field? These are the questions that RMC Sport is trying to answer in its new issue of Transversal, devoted to the dirty kids of football. From the first episode, the documentary hits hard by plunging us back into the England of the 1980s and 1990s in the heart of the “Crazy Gang” of Wimbledon. Nicolas Lansalot and Kévin Morand, the two directors, set off to meet Vinnie Jones, one of the most violent players in the history of the Premier League.

“‘Guys today we don’t play football. Today is war.’ Vinnie Jones was the illustration of street fighting on a field “

Then, Transversal looks back on the French nightmare of the Ramón Sánchez Pizjuán stadium in Seville. That summer evening of 1982 when Harald Schumacher, the famous German goalkeeper, signed a devastating outing on the French Patrick Battiston, in the semifinals of the World Cup in Spain. The man nicknamed “Toni” delivers an exclusive interview in which he explains his journey – from his beginnings in Düren to his consecration in Mannschaft – and tells us his version of the story. Facing the camera, Schumacher explains that he broke all his fingers during his career. He affirms without batting an eyelid that “the pain is in the head” and says that to be convinced of it he asked his wife to burn his forearms with cigarettes.

Finally, this first episode ends with the anecdotes of an impulsive person, of a rebel. Former player of PSG, Strasbourg, RC Lens or Besiktas, Pascal Nouma notably marked his passage on the football scene by his aggressiveness, his violent behavior. Deviations that disturb as much as they fascinate.

“I break his nose, I redo his teeth, and his wife must be happy because he must be much more handsome now”

Anecdote told with crazy coldness by one of the great Bad Boys of the French championship.