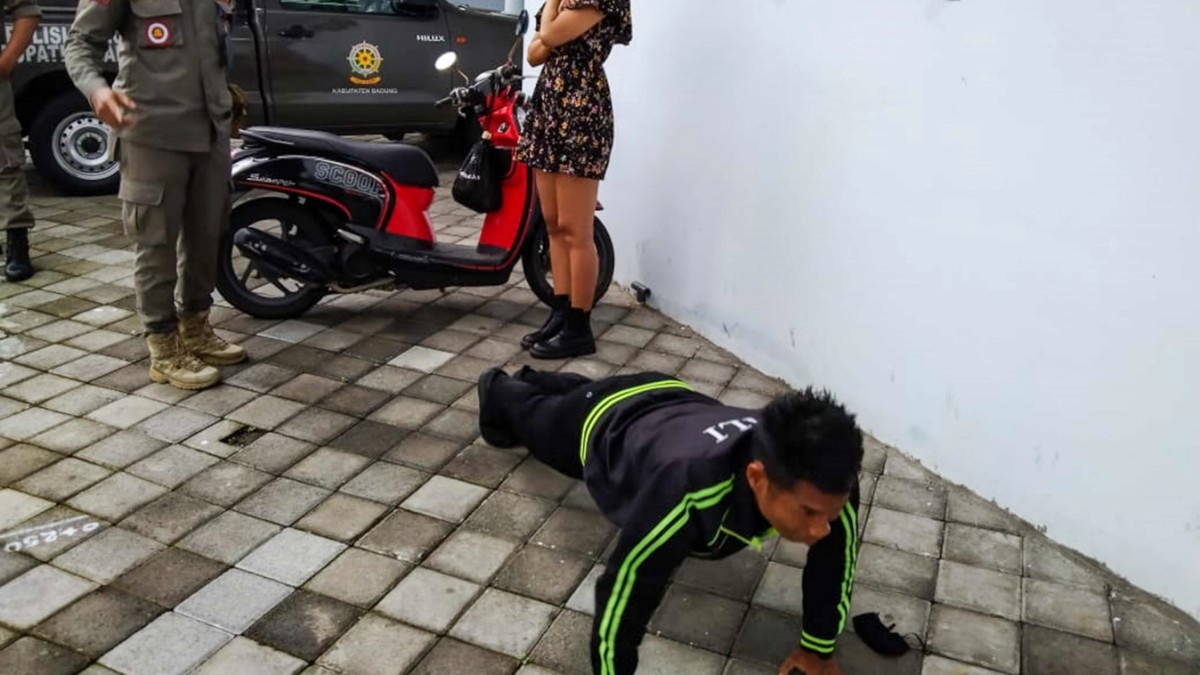 It sounds like a reprimand from gymnastics father Jahn’s time: If you arrive late for training, you have to do 20 push-ups, if you grumble, you get another 20 more. Anyone who thinks this is funny has never looked into the mirrored sunglasses of an Indonesian police officer.

Laughing wouldn’t be a good idea at this point. You have to know that when you are stopped in Bali without mouth and nose protection, which in most cases appears to the visitors as peaceful, friendly and beautiful.

Several clips that are currently circulating on social networks show that strangers who are caught violating Covid-19 regulations and cannot pay the required 150,000 rupees (around nine euros) fine are also asked to pay 50 instead Doing pushups.

If the protection hangs under your nose, as you know it from careless Germans from the tram, 15 pushups are still due. It should also have happened that the punishment was converted into squats because the perpetrator was not fit enough.

The Europeans and the Americans are the problem

It is an observation that can currently also be made in Thailand: If someone walks around in public without a mask, it is almost never an Asian. Europeans and Americans in Southeast Asia in particular are considered to be virus spreaders: not only because the numbers continue to rise, but because Europeans and Americans apparently listen more reluctantly to science and authorities.

“Foreign tourists show very little respect for wearing a mask,” said Gusti Agung Ketut Suryanegara, a police officer from Bali, told AFP. 90 percent of those warned are strangers, “first they say that they do not know the rules”, explained Suryanegara, “then they say that they have forgotten the mask, that it has gotten wet or broken”.

READ  The aerosol debate soars during the second wave

Whereby the terms tourists or foreigners only have a limited impact, because at the moment only those who live in Indonesia come to Bali. Domestic tourism was heavily advertised, hotels are sometimes absurdly cheap, because until February 8th, only those who have a business visa or a diplomatic passport and who have completed a hotel quarantine at their own expense are allowed to travel to Bali.

Before Christmas, a PCR test was made mandatory for a flight, which resulted in 133,000 booked flights and a corresponding number of hotels being canceled. “For sale” signs can now be seen more and more frequently in the shops, and some hotels have ceased operations.

The sensitivities are no accident

Traveling on the island is unhindered once you are there. Most of the sights are open and not very busy. Actually, it would be high season, and Germans who long for the sun would also normally come to Ubud or Kuta. Since November last year, the regional government has been trying to apply for a special regulation in Jakarta to make international tourism possible again. So far without success.

The politicians in Jakarta are under enormous pressure. The sensitivities are no accident. The infection rates in Bali are low, but almost as high as in India in the whole of Indonesia. The island state, in which 270 million people live, has lamented around 860,000 infections and 25,000 deaths since the pandemic began. The government is now trying to get Corona under control with a vaccination campaign.

Last Tuesday, the authorities arrested an American woman who had been living in Bali for a year and who gave useful tips on Twitter under the name Kristen Gray on how to get to Bali despite the entry ban. She raved about the island because you only have to pay $ 400 for a nice house, compared to the $ 1200 her one-bedroom apartment in Los Angeles. She also praised the “LGBTQ-friendly and non-racist lifestyle”.

Actually advertising for the battered vacation paradise. But the Balinese were not flattered. Before her Twitter account was shut down, many locals complained directly to Gray and asked immigration authorities to expel the woman immediately, the online magazine reported Bali Sun..

In the past few days, the corona numbers in Bali rose again. A result of the domestic wave of travel at the turn of the year. “Still, we are doing pretty well by international standards,” says one hotelier. All in all, however, one is pretty tired of the matter. “Nobody likes it anymore, not even the police.”