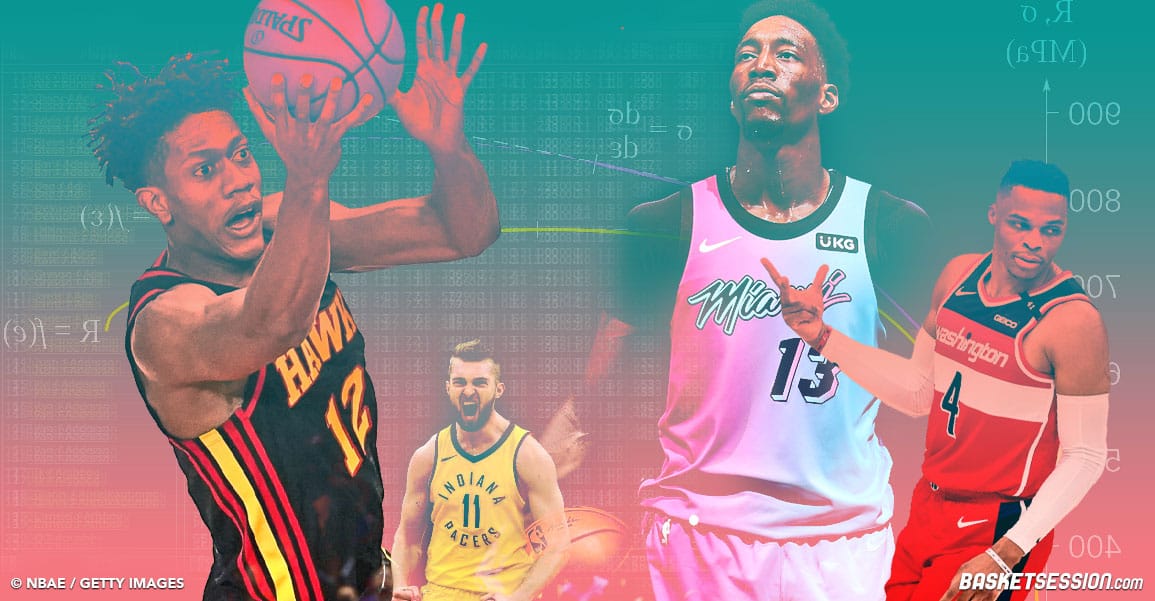 Pat Riley defined Bam Adebayo as the ” real deal. The real lease. ” He’s Dwyane Wade. He is Alonzo Mourning “, Added the boss of the Miami Heat, to make it clear that the pivot is considered by his employers as the next superstar of the organization. On paper, however, he had more the traits of an excellent all-around rather than a pure franchise player.

But it was without counting on the constant progress of this hard worker. Today, Adebayo is perhaps a player halfway between Al Horford and Anthony Davis. It is long. Strong. He is frolicking. He’s a great defender and a solid rebounder. A very good passer at the high post. But it’s also an interior that can face-up and is very comfortable with the ball in hand, even when it comes to bouncing up in dribbling.

Adebayo is expanding its arsenal more and more. He tries things. The evolution of his number of pull-ups is significant. Only 10% of his shots last year, for just 29% of success. It rose to 29%, almost a third of its attempts, for 53% success! Because Bam shines at mid-distance, where his 46% success rate is greater than the percentages of DeMar DeRozan, Jayson Tatum, Devin Booker or Kawhi Leonard. He excels in this intermediate zone, like Davis and like Horford there was an era.

Result, the pivot of the Heat is currently the best scorer of his team with 20 points per game. He obviously takes advantage of Jimmy Butler’s absence. And the results of the franchise (6 wins, 12 losses) suggest that it is precisely missing another player of his caliber by his side. But this trend could be confirmed even when the Floridians will have raised the bar. Adebayo is not just a complete All-Star, he is indeed a potential top-15 in this league.

Okay, that’s not really a teaching. Anyone who follows the NBA and the results a bit realizes that the DC team has been struggling since the start of the season – although they have extenuating circumstances too. Among the good ten matches on Wednesday night, I wanted to watch the one between the Washington Wizards and the New Orleans Pelicans. Or rather, I tried.

I started this meeting because, in the end, I realized that I hardly ever watch the Wizards. Moreover, if one of the findings to come may seem hasty to the courageous who follow the franchise on a daily basis, know that these are necessarily hasty observations after a very small sample. All that to say: I wanted to embark on this great adventure which consists in observing Scott Brooks’ group.

I lasted 7 or 8 minutes before switching to the game between the Atlanta Hawks and the Brooklyn Nets. 7 or 8 minutes of rough basketball, not even inherently bad but clearly not at the NBA level. The worst part is that the gap was not even that big between the two teams when I stopped.

But the Wizards therefore started the game by attempting more or less the same system (and its derivatives) six or seven times in a row. Constantly looking for Bradley Beal, the only talent really capable of scoring in the five major. Scott Brooks really shows tactical limits, like in Oklahoma City but without the talent of a second superstar.

Robin Lopez is slow. Isaac Bonga is long, but that’s it. Jordan Bell, it makes you wonder why some have placed hopes in him one day. These guys aren’t NBA starters. Moreover, they are supposed to come out of the bench but the COVID-19 and the injuries are currently decimating the workforce already not folichon of Washington. Not sure Beal will last very long in this mess.

Do you know who is slowly coming out on top of Anthony Davis’ transfer to the Los Angeles Lakers? The Atlanta Hawks. Because in the exchange, the New Orleans had unearthed the Angelenos’ fourth draft pick… before passing it back. And so it is the Hawks who benefit today from De’Andre Hunter, a really promising player.

The sophomore progresses game after game. It is even gaining momentum, recently peaking at 33 units against Giannis Antetokounmpo and the Milwaukee Bucks. He has not fallen below the 11-point mark (in 17 games) once this season. All with ultimately very few systems designed for him.

Hunter does not yet have a real strong point in attack but he is slowly taking his marks. His handle is not yet effective enough to really wipe out his drive-throws and he is more comfortable in catch-and-shoot than to create his own shot. Essential keys to becoming an All-Star, and not just an excellent complement player. But in fact, yes, there is still a situation in which he dominates his opponents: he is bestial with his back to the basket.

Kyrie Irving paid the price in the narrowly lost duel against Brooklyn. He found himself defending on the young man, who immediately called for the ball at the low post to work him and finish close. It must be said that the winger trained in Virginia is long: 2.03 meters with sprawling arms. And athletic. Assets to push his defender before concluding. And there are few defenders on his post capable of stopping him.

It’s simple, De’Andre Hunter brings his team 1.46 points per possession in these situations. Apart from the pivots Khem Birch and Robin Lopez (hey, hey, a Wizard), no one does better in the NBA. He performs better in post-up than a Jayson Tatum, a Kevin Durant, a Luka Doncic or even a Joel Embiid. Except that the sample is very low: 11 possessions since the start of the season. The Hawks need to do a better job to create this favorable game-up, identify it and serve their 23-year-old who still averages 18 points and 5 rebounds.

Domantas Sabonis and the Pacers’ dilemma

Domantas Sabonis and Nikola Jokic have a few similarities, even though they don’t box in the same category – one is an All-Star, the other an MVP contender. But they are two great European pivots, with touchdown, address, solid rebounders, vista and a real sense of passing (inherited from dad in the case of Domo!). They are also two mediocre defenders, not fast enough and therefore often exposed.

On the other hand, the difference is how their leaders surrounded them to try to hide their loophole. At the Nuggets, Jokic is aligned with Paul Millsap, an undersized interior, tough and a priori sufficiently mobile to defend on wingers. At the Pacers, Sabonis plays with Myles Turner, a tall man cut from solid oak capable of protecting the circle better than anyone in the NBA now (4.2 blocks on average). Both are quality defenders. 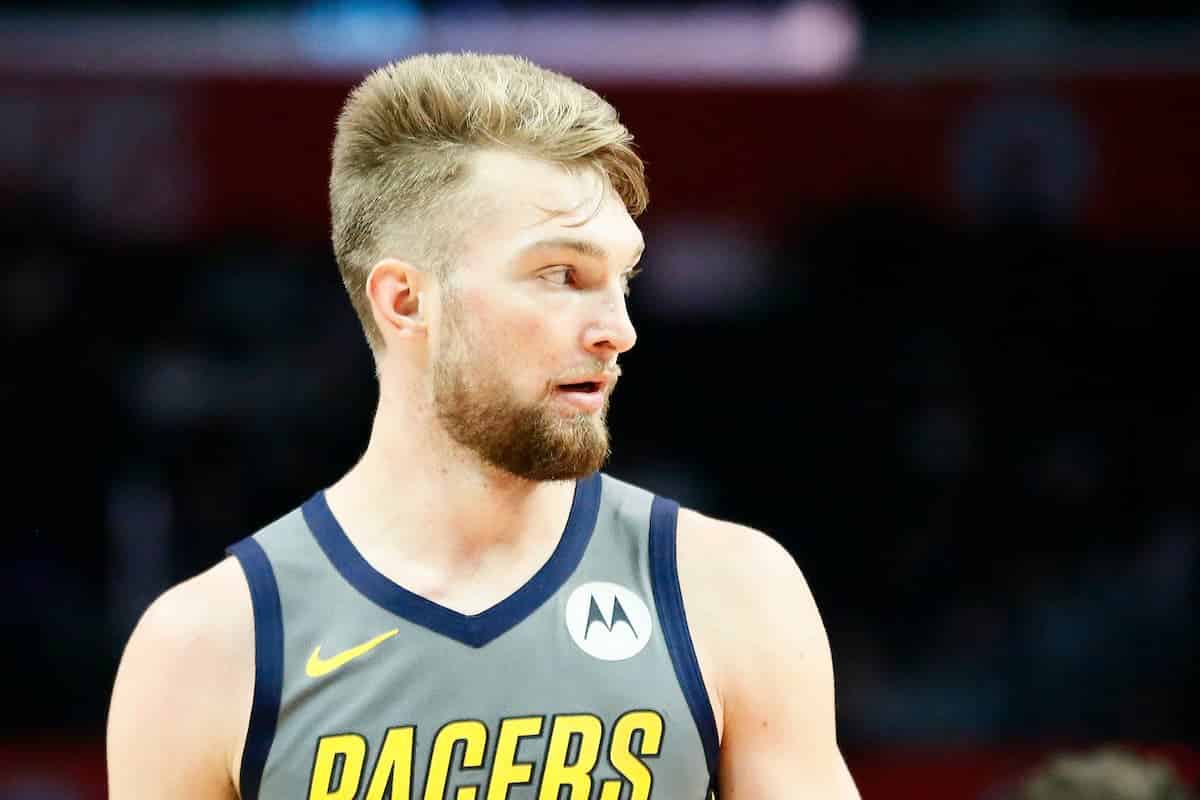 But their different profiles make… all the difference. With Millsap, the “Joker” is confined to the opposing heavy pivots. With Turner, it is Sabo who often struggles with the fleeting four posts. And he’s struggling. Really worth it. His lack of laterality is obvious and the Toronto Raptors took advantage of it by constantly attacking the Lithuanian in the center during the meeting between the two teams earlier in the week.

By covering painfully, he left spaces. And the defense always ended up cracking after the second or third drive and kick. Even sometimes from the first. A statistic that illustrates the Pacers’ dilemma: when Turner and Sabonis are together on the field, Indiana has a positive differential of 3.6 points. Correct. But when the American evolves without his European comrade, this figure rises to +17 !!! On a smaller sample, it is true (150 minutes in all).

The Indianapolis franchise scores as many points without its best player but it collects 14 fewer. And when Sabonis is on the field without Turner, the Pacers go straight to the water in defense. So what to do? They can always try to continue like this, knowing the limits of the duo. But it wouldn’t be surprising if the executives ended up giving in to the temptation to transfer Turner by trying to find a very versatile four-position in defense on the market.

Richaun Holmes, a player who wants you well

There are players who give the impression that everything is always going to be fine when they are on the pitch. You can put Richaun Holmes in this category. The Sacramento Kings pivot has brought a lot to his team since the start of the season. Already because he is content to do what he can do. It may seem trivial but in the NBA you need guys willing to sacrifice themselves and embrace their role.

Holmes is there to defend, rebound, protect the circle, set screens, run and dunk. No need to expect more from him. On the other hand, he gives his all for each task assigned to him. He converts 68% of his attempts because he does not insist on scattering in attack. He shines on pick-and-roll – he’s one of the league’s ten most effective players as a roll man – and he’s a perfect partner for De’Aaron Fox and Tyrese Haliburton. Suddenly, he is running at almost 14 points per game since the start of the season. Even with 20 points in the Kings victory against the Magic.

Evidence of the impact of Richaun Holmes, he is the ONLY player of Sacramento with a positive differential among those who have played more than 6 matches. +1.9 out of 100 possessions. The following ? Harrison Barnes with… -4.2. The Net Rating is not always a very telling statistic but here, in this specific case, it shows that the passages of the pivot are beneficial to his team since his comrades of the five major are all in the negative.