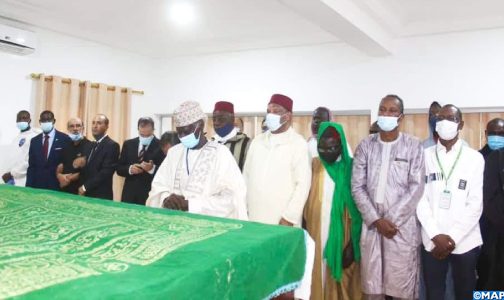 Bamako – The ceremony of putting in beer and closing the coffins of the mortal remains of two truckers killed on Saturday in a cowardly and barbaric attack perpetrated by unidentified armed individuals against a Moroccan commercial convoy in the commune of Didiéni, in Mali, took take place on Thursday in Bamako.

This dignified and sober ceremony, held within the framework of compliance with the restrictions linked to the coronavirus pandemic, took place in the presence of the Moroccan ambassador to Mali, Mr. Hassan Naciri, members of the embassy, ​​as well as Mr. Moussa Diarra, President of the Morocco-Mali Friendship Association and Imam Thierno Hady Thiam, President of the Federal Council of Adepts of Tariqa Tijaniya.

On this occasion, the audience raised prayers for the repose of the souls of the two victims of this cowardly attack.

The mortal remains of the two truckers will be repatriated Thursday evening. They will be transferred to Mohammed V International Airport in Casablanca before being transported to Agadir.

The Malian Minister of Foreign Affairs and International Cooperation, Mr. Abdoulaye Diop, received the Moroccan ambassador on Monday, an audience during which the head of Malian diplomacy “on behalf of the President of the transition, Head of the State, HE Colonel Assimi Goita and the government, strongly condemned this cowardly and barbaric attack ”in which two truckers were killed and another injured.

The Malian minister had also informed the Moroccan Ambassador that since this attack, the ministries in charge of security, defense and health have all taken appropriate measures, each in their field and expressed the commitment of the authorities. Malian women to do everything they can to find the culprits and bring them to justice.

The driver injured in this attack is still being treated in a clinic in the capital Bamako and his state of health is improving.