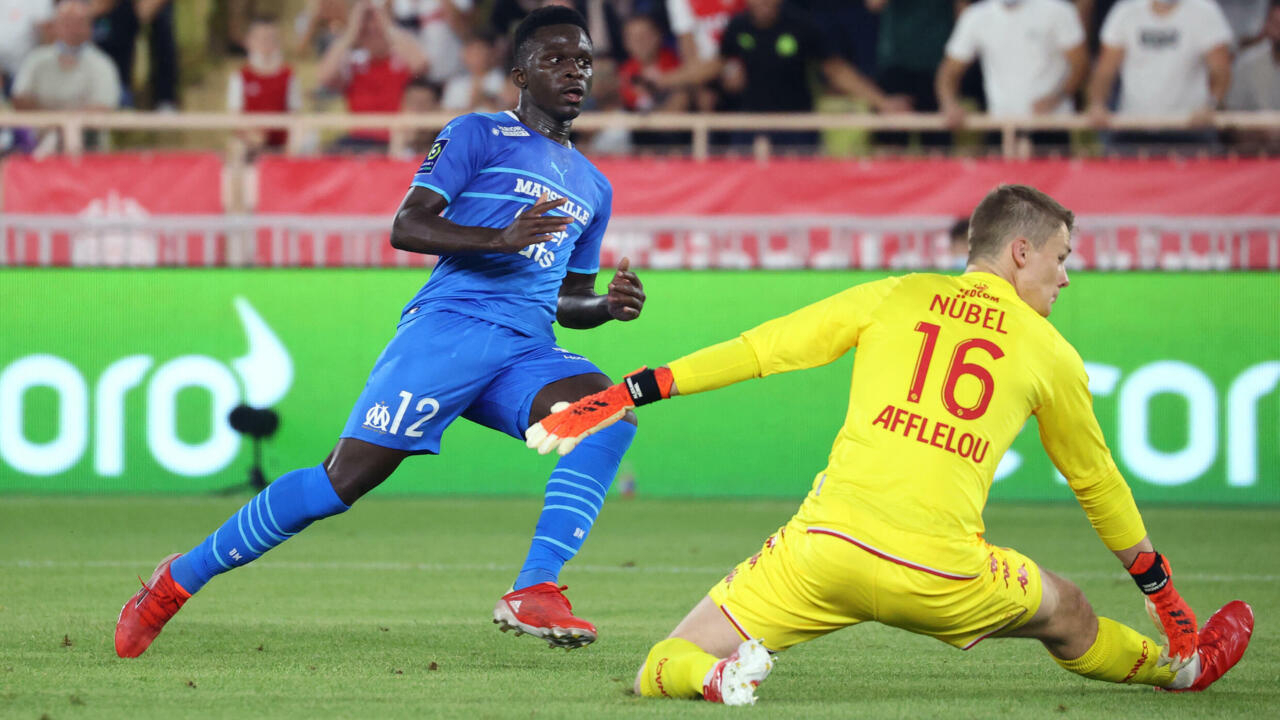 During the match in Monaco, Bamba Dieng revealed himself to the world. For his first start in Ligue 1, the 21-year-old Senegalese striker scored twice. The birth certificate of a future great footballer, a pure product of the Diambars Institute in Saly, Senegal.

Exhausted, crippled with cramps, exhausted… but the new hero of the Olympian people. Such was the triumphant exit of Bemba Dieng at the 67e minute of Monaco-Marseille (0-2), Saturday 11 September, for his first tenure in Ligue 1. The young Senegalese striker scored a double to defeat the Mediterranean opponent of OM and released an exemplary performance, which has caught the eye of observers.

Without his master to play Dimitri Payet, Marseille did not yet have all its offensive arguments for this trip to the Principality. Never mind ! Jorge Sampaoli, Argentinian OM coach, took the 21-year-old Senegalese out of his hat and gave him the keys to the attack.

Great good has taken him: throughout the match, he mistreated with pleasure his direct opponents, Chrislain Matsima and Axel Disasi. Two posts, two goals and an incalculable number of accelerations… Bamba Dieng did not miss his chance and even walked away with the man of the match trophy.

“I’m very happy with this performance. I thank the whole team for helping me. I did two posts, but I knew it was coming. I stayed focused to do better and I was able to score these two goals. It was madness, our supporters are everywhere. I thank them, they make us want to win and play well “, greeted the young Senegalese after the match. “I am always available for the coach. I will stay focused, do what I have to do and it will be fine. I have no words, but I am very happy.”

Bamba Dieng has certainly taken another step forward in his career. Arrived in August 2020 from Senegal, he was however labeled as “still learning” by the leaders of Marseille who were ready to let him go for 5 million euros in the event of an offer.

Coach Jorge Sampaoli opposed his departure. Nice intuition on his part: “For me, Dieng is not a surprise, otherwise I would not have put it on. He has qualities that we see on a daily basis, for playing in spaces. We chose him for this ability to hurt their backs, “he simply summed up at the end of the match. “He has great potential.”

While he had played so far only a tiny minute this season against Montpellier, on the first day of the season, the Senegalese found himself propelled on Sunday to the front page of L’Équipe, the sports daily reference French, and La Provence, the regional newspaper in the south-east of France, close to OM.

Trained in Senegal at the Diambars school

A native of Pikine, in the suburbs of Dakar, Bamba Dieng joined the Diambars institute at the age of 13, a school club created by Patrick Vieira, Bernard Lama, Jimmy Adjovi-Boco and Saer Seck, the current director, who train talents Senegalese.

In this training center based in Saly, the young Bamba Dieng tests himself in several positions before finally settling in attack. A blank year due to a cruciate ligament sprain delays its hatching. However, he struggles to come back and joins the pro group.

During his first professional season, he scored 12 goals in 14 Senegalese Ligue 1 games… and gleaned the nickname “Bambagoal”.

This is the moment when Bamba Dieng is proposed by his agent to OM, who has just signed a partnership with Diambars. He was then 20 years old and his tests were conclusive. At that time he caught the eye of Nasser Larguet, the director of the training center, who detected in him an immense potential which only required to be matured as a reserve team.

It is the same Nasser Larguet who launches him for the first time in the deep end in February 2021 in the Coupe de France. While he is acting at the head of the team due to the dismissal of André Villas-Boas and in the midst of a war between the supporters of OM and the management of the club, he establishes the Senegalese minot in the Coupe de France against Auxerre. Eleven minutes later, he scored his first goal with OM.

His agent Seydou Bocar Seck, who is also director of the Diambars institute, promises on RMC Sport that we have not yet seen everything of Bamba Dieng’s potential: “I am happy and proud of him, but not moved. Quite frankly, I expected it. We know his qualities and his mentality. He knew that his time would one day come. We focus a lot on his speed and power, but Bamba has other strengths as well. He feels the calls, he has an above average technical quality and, you will see, he has a very good relaxation and an excellent head game. The supporters are not at the end of their surprises with Bamba “.

Bamba Dieng has already won hearts, especially among former Marseille scorers like Michy Batshuayi or Mamadou Niang – the latest Senegalese to have scored a double with OM -, who have drawn their enthusiasm on social networks. This is probably just the start.

Bamba Dieng is under contract with the Olympian club until 2024. He is also in the midst of salary negotiations, while he currently receives only 1,800 euros per month. There is no doubt that this shattering double should encourage Marseille leaders to offer a raise to the young Senegalese who is to meet the club management on Tuesday, September 14.