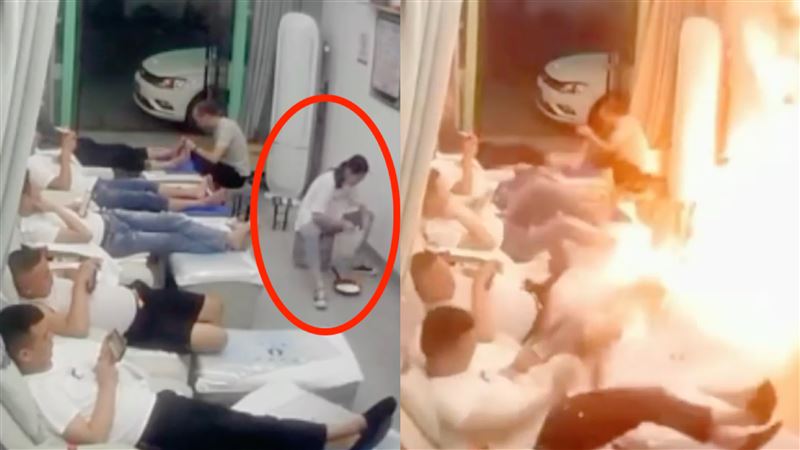 ▲The female employee picked up the whole barrel of essential oil and added it to the small brazier. (Picture / Photo taken from the self-exploding waste commune)

Some pedicure shops and massage shops will use “heated essential oils” to massage and relieve pressure for guests. However, when distributing, you must pay attention to whether there is a fire source around. If you use fire carelessly, it may cause tragic tragedy. A famous netizen shared a video on Facebook. After a female employee of a pedicure shop picked up the whole barrel of suspected essential oil, she added oil to the small brazier on the ground and packed it. Unexpectedly, the whole barrel of essential oil burst open when it fell down, and everyone in the shop was burned. In a group, they all fled outside the store.

▲ When the essential oil is added to the small brazier, it instantly explodes into a fireball. (Picture / Photo taken from the self-exploding waste commune)

The original PO reposted a video in the pedicure shop on the Facebook group “Blasting Waste Commune Public Edition”. It can be seen that there are 5 male customers lying down waiting for the massage service by the clerk, but a female employee is preparing to add essential oil. Just as she picked up the whole body When the barrel of essential oil was added to the small brazier, the flames burned upwards along the fallen essential oil into the barrel. The essential oil barrel exploded instantly, and the female employee was burned into a fireball on the spot.

▲The male guest on the side was affected. (Picture / Photo taken from the self-exploding waste commune)

After the female employee was burned, she was so frightened that she threw the essential oil barrel in her hand, but she threw the essential oil on the male customer aside. Many male customers were splashed with essential oil, and their bodies also caught fire one after another. One of the male customers responded quickly and immediately He took off his burning shirt and rushed out of the store with all the people affected by the fire. However, the female employee was suspected of being contaminated with alcohol on a large area of ​​her body, and the fire continued to burn all over her body. Until she rushed out of the store and disappeared from the camera, she continued to scream and scream.

▲ One of the male customers immediately took off his burning shirt. (Picture / Photo taken from the self-exploding waste commune)

After the video was exposed, it attracted a large number of netizens to leave comments and heated discussions, “It will really explode, just like the meaning of a small hot pot that cannot be added with alcohol ointment, it will explode in an instant”, “What is she thinking? “It’s so hot and throwing it at others, it’s good and good”, “The first one is unlucky, and all the body is full of fire”; however, because the person who posted the post did not mention it, it is impossible to know the time, place and source of the video.