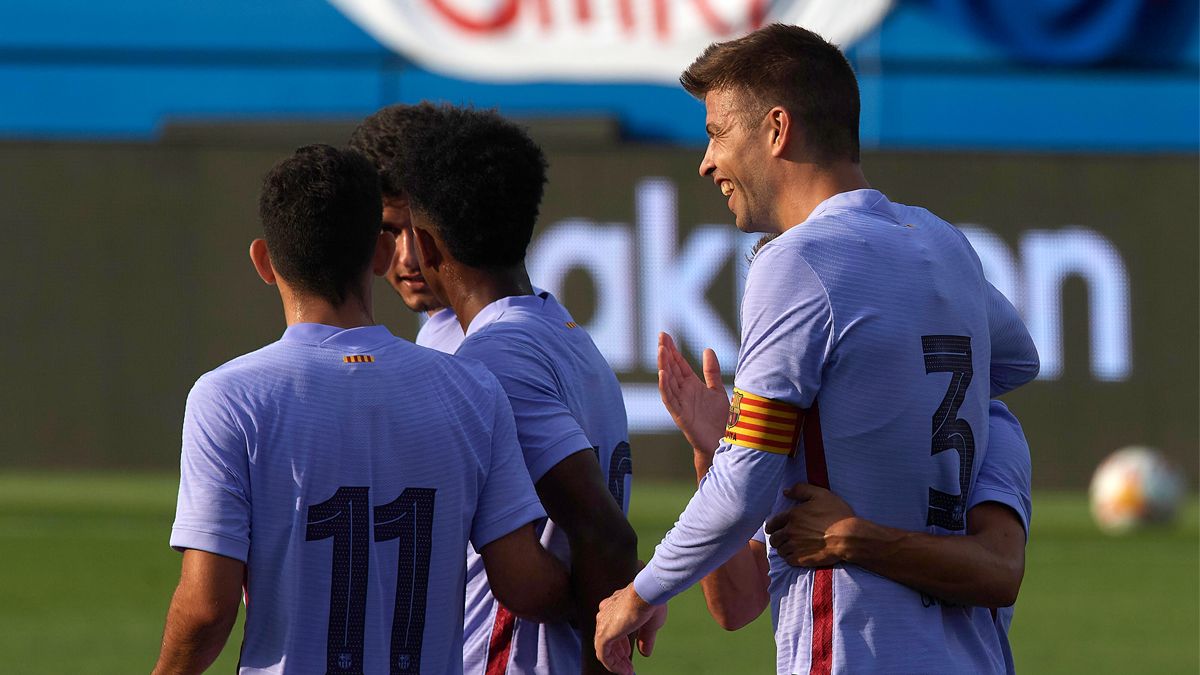 The FC Barcelona still feeling good! In the second game of the 2021-2022 preseason and in Memphis Depay’s debut as a Barça player, Ronald Koeman’s men beat Girona thanks to the goals from Gerard Piqué, Rey Manaj and Depay, to counteract the goal scored by Samu Saiz from the penalty spot. The culés continue with a great staging and with the youngest plugged in.

In the early stages of the confrontation, no team dared or risked more. The crash was very even and, in fact, it was the Girona who gave the first warning to those of Koeman. In the 12th minute, Stuani received in the small area after a great start from Samu Saiz, to break Piqué in the area. The Girona player crossed the ball with his right hand and Iñaki Peña had to fly to stretch and avoid what was going to be a clear goal from the visitors.

However, the more possession of the ball that Barça had, the more confidence they gained to approach the area defended by Juan Carlos. Demir signed a great maneuver after receiving the ball in the front, to drive and look for his shot with the left foot, but the defenders of Girona ended up closing their approach and sending the ball to the corner. From there, the game went to the Catalans and in minute 20, Miguel Ángel Ortiz whistled a penalty in favor of Koeman’s.

Balde had entered the side of the area and was knocked down by a zagero inside the area. Gerard Piqué was in charge of going face to face with Juan Carlos, but the goalkeeper guessed his shot easily. However, after having touched the ball to clear it, the rebound fell on the arm as it fell and ended up entering the goal. Barça continued to press the rival area and in a matter of minutes the second fell.

Mortimer had reached the baseline too comfortably down the left wing and put a tight and low ball at the near post, where it was King Manaj to mark his fourth goal of the preseason and increase the advantage on the scoreboard for the Catalans. However, the happiness did not last long for the squad (or Barça) because he was forced to leave the pitch as a result of some physical discomfort.

Girona took advantage of the numerical advantage on the field and moved closer to Iñaki Peña’s area. Those of Miguel Ángel Sánchez were pressing more and dthey threw a bounced ball into the area that Mortimer cleared with his hand, causing the second penalty of the afternoon that Samu Saiz defined to perfection as panenka before the Barça B goalkeeper.

Depay’s debut with a goal

Faced with Manaj’s injury, Memphis Depay officially debuted with FC Barcelona wearing number nine behind his back. In the first minutes on the field he left good feelings, but it was at the beginning of the second half where he was more dangerous in the face of the rival area, despite the fact that Girona started pressing.

In minute 53, Juan Carlos made a great start to cover an attempted transfer of Sergi Roberto to Depay within the area that, if the Dutchman hunted him, it would surely be a goal. Three minutes later, Memphis returned to action and received on the edge, cut and shot, but his shot was blocked by the rivals. Miralem Pjanic also wanted to join the party and sent a very hard whip that beat the goalkeeper and hit the crossbar.

Those of Ronald Koeman continued looking for the sentence of the party and in the 63 ‘, Depay received the ball with his back to goal but ended up getting stuck. Griezmann, shortly after, sent a powerful shot that went out in the area. ‘The Little Prince’ continued to stalk and looked for a death pass from the baseline, but the goalkeeper covered well. The connection between the French and the Dutch continued to bear fruit and in 80 ‘, Griezmann sent a ball from the right wing that Memphis narrowly missed.

From so much insistence, the Dutch ended up ‘wetting’ from eleven meters. In the 85th minute, a Girona player avoided a self-pass by Griezmann by rejecting the ball with his hand and the referee whistled a penalty that Memphis Depay charged a very strong right hand that Juan Carlos touched, but did not manage to clear and entered the squad to seal the second victory for the Catalans in the preseason.