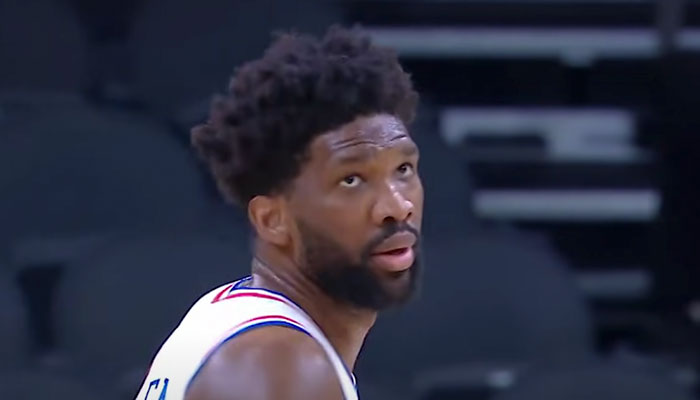 The pill is struggling to pass to the 76ers, and especially with Joel Embiid after the elimination against the Heat. A few minutes after this final defeat, the Cameroonian pivot did not hesitate to flirt openly… one of his executioners!

No one can blame him for having abandoned his teammates, or for not having given his all to keep his team alive. Even wounded in the thumb and face, Joel Embiid tried everything to avoid the elimination of his 76ers. In vain. After a final performance marked by clumsiness, he and his teammates were forced to face the facts and accept the superiority of their opponent.

Philly was indeed no match for the Heat, carried by a gala Jimmy Butler and by a still impressive collective. An observation that the Process was logically the first to regret at the end of Game 6, and which gave rise to a strong feeling of nostalgia… but also jealousy. Indeed, the star pivot would have liked to be able to consider several Miami players as teammates!

In front of the journalists gathered at a press conference, Embiid spoke about the qualities of the Floridians, but especially about those… of PJ Tucker:

What immediately comes to mind is his defense. He plays with so much energy. He thinks he can go from point A to point B and that no one can stop him. He’s tough.

Did James Harden abandon the Sixers? The overwhelming video

He is physical and rough. They (the Heat) have a few players like that, whether it’s Bam (Adebayo) or many others. And I’d be lying if I said we’ve had those kinds of players since I came to Philadelphia. It is only the truth. We never had PJ Tucker. That’s really what I mean. So when the physical aspect becomes more important, especially in the playoffs, we need that. We need tough guys like that.

His partners since 2016, the year of his NBA debut, will appreciate. Nevertheless, difficult to go against JoJo on this one, at least with regard to the roster of the Sixers this season. If he can rely on a lot of talented players, Doc Rivers lacks tough soldiers, capable of sacrificing themselves physically without necessarily blackening the stats sheet.

Conversely, and as Embiid clearly mentions, the Heat draws much of its success from elements of this genre. The leader of the franchise, Butler, for example, fits this description perfectly, he who will always put the results of his team before his figures, and who does not back down from any challenge. The Cameroonian therefore has reason to be frustrated, as it may have been when discussing the James Harden case.

Joel Embiid regrets the lack of bite in the 76ers squad, and does not hide his desire to recruit a player like PJ Tucker. Its leaders know what they have to do, even if the brute of the Heat has a player option for next year!

they could make back pain worse in the long run