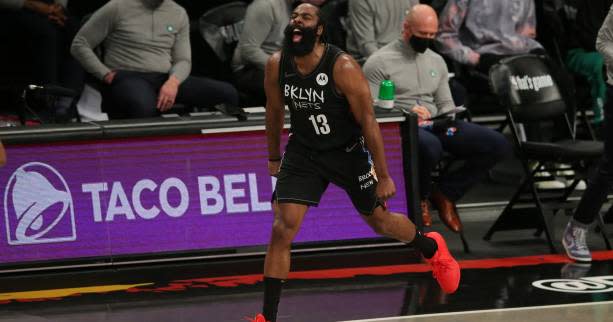 Guided by a huge James Harden, the Brooklyn Nets dominated the Boston Celtics on Tuesday night (123-109) to win the series four wins to one. They will face Milwaukee in the next round. Denver, winner of Portland in double overtime (147-140), and Phoenix, largely dominating against the LA Lakers (115-85), lead three wins to two. The expected clash between Giannis Antetokounmpo and the Brooklyn armada will take place in the second round of the NBA play-offs. Tuesday night, the Nets eliminated Boston four wins to one by winning Game 5 of the series (123-109) to join the Bucks, who had swept Miami (4-0). Author of a triple double (34 pts to 10/17 shooting, 10 rebounds, 10 pts), James Harden led the charge of the New Yorkers, well supported by Kevin Durant (24 pts) and Kyrie Irving (25 pts) . read also The results of the play-offs The Los Angeles Lakers, on the other hand, are in great difficulty, now led three wins to two against Phoenix. Deprived of Anthony Davis, the reigning champions completely sank in Arizona on Tuesday (85-115) under the blows of Devin Booker (30 pts). LeBron James (24 pts) and his partners will play Game 6 on the verge of elimination on Thursday. In Denver, the Nuggets took the advantage three wins to two over Portland after a crazy evening, in double overtime (147-140). Nikola Jokic (38 pts, 11 rebounds, 9 pd) and his partners, however, had to work rarely against a Damian Lillard on fire (55 pts, 10 pd). Twice, the leader of the Blazers snatched the equalizer in the dying seconds to snatch overtime, then the second, on shots at three stratospheric points. But in the second “extra time”, the Nuggets ended up snatching the decision. They could stamp their ticket for the second round in Game 6 on Thursday in Portland.