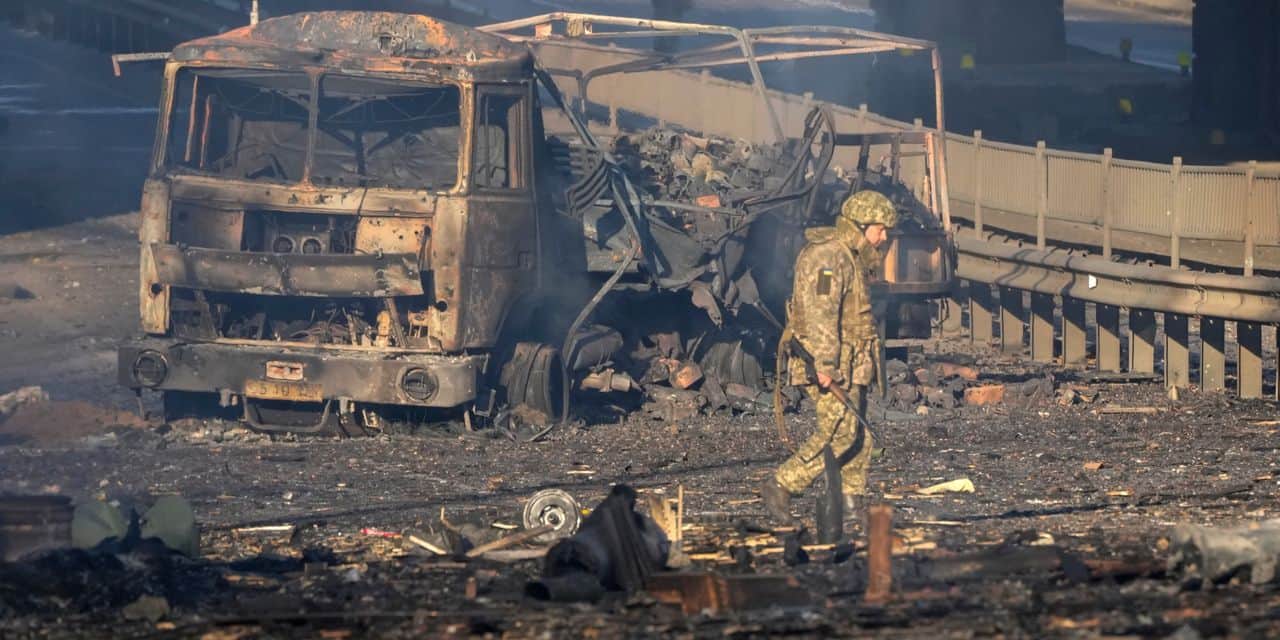 Fourth day of clashes between Ukrainian forces and the Russian army this Sunday for control of the capital, three days after the invasion launched by Vladimir Putin.

8:24 a.m .: Putin salutes the “heroism” of the forces engaged in Ukfraine

8:17 am: The Kremlin says it is ready for negotiations with Ukraine

8:08 a.m .: Finland to close its airspace to Russian planes

Finland will close its airspace to Russian planes in retaliation for the invasion of Ukraine, the government has announced, joining many European countries.

The Nordic country, with its border of more than 1,300 kilometers with its Russian neighbor, “is preparing to close the airspace to Russian air traffic”, Transport Minister Timo Harraka said in a tweet posted on Saturday night to Sunday.

7:32 am: “Breakthrough” of the Russian army in Kharkiv, the country’s second city

The authorities of Kharkiv (north-east), the second largest city in Ukraine, announced Sunday a “breakthrough” of the Russian army to its center, on the fourth day of the invasion of the country by Moscow.

“There was a breakthrough of the Russian enemy’s light vehicles in the city of Kharkiv, including in the central part,” local official Oleg Sinegoubov said on Facebook, indicating that the fighting was continuing and calling on the few 1.4 million inhabitants not to leave their homes.

7:16 a.m .: The Russian army claims to have surrounded two major cities in the south

The Russian army said on Sunday it had surrounded two major cities in southern Ukraine, Kherson and Berdyansk, on the fourth day of its invasion of the country.

“In the past 24 hours, the Russian armed forces have completely blocked the cities of Kherson and Berdyansk”, which have 290,000 and 110,000 inhabitants respectively, the Russian Defense Ministry said, quoted by the TASS agency.

7 a.m.: update on the situation

On the fourth day of Vladimir Putin’s offensive, anti-aircraft alarm sirens sounded again in Kiev overnight from Saturday to Sunday, the official Special Communications Service said, calling on residents to take refuge in the shelters of the capital.

The Russian forces “continue their offensive to lock Kiev” after having “completed their regrouping” on the northern front, for its part affirmed the Ukrainian army on Saturday evening.

About 30 kilometers south-west of Kiev, fighting continues for control of the Vassylkiv air base, preventing firefighters from intervening to extinguish the major fire at an oil depot struck overnight by a Russian missile near this city, said Sunday at dawn the head of the administration of the Kiev region, Oleksy Kouleba.

In Kharkiv (east), a woman was killed during a Russian fire on Saturday evening on a residential building, according to Ukrainian relief.

6:25 a.m .: North Korea holds the United States responsible for the war in Ukraine

The United States is “the root cause of the Ukrainian crisis”, claimed North Korea, in its first official reaction after Russia’s invasion of Ukraine. Washington has pursued a policy of “military supremacy in defiance of Russia’s legitimate demand for its security”, assures a message published on Saturday on the website of the North Korean Ministry of Foreign Affairs, signed by Ri Ji Song, researcher at the Society. study of international politics.

“The root cause of the Ukrainian crisis also lies in the authoritarianism and arbitrariness of the United States,” the message continues.

Mr. Ri criticized the United States for having “double standards” with regard to the rest of the world. He accused them of interfering in the internal affairs of other countries in the name of “peace and stability” while “unnecessarily denouncing the self-defense measures taken by (these) countries to ensure their own security. national”.

“The days when the United States reigned supreme are over,” the message read.

The message posted on the website of the North Korean Foreign Ministry constitutes a “low-key” official reaction from Pyongyang, because it was published under an individual name, analyzed Park Won-gon, professor of North Korean studies at the Ewha University in Seoul.

“The conclusion: it’s all the fault of the United States,” he told AFP.

Along with China, Russia is one of North Korea’s few allies. Moscow has long opposed the pressure exerted on Pyongyang over its weapons programs, and has even called for an easing of international sanctions.

Russian troops bombarded a radioactive waste storage facility in the Ukrainian capital Kiev overnight from Saturday to Sunday. Only the fence and the buildings of one of Radon Association’s subsidiaries were affected, reports the Ukrainian English-language online news site The Kyiv Independent based on information from the National Emergency Service NSW, Storage tanks of nuclear waste are therefore currently intact. Radon Association was founded in 1960 and has several locations in Ukraine. The main task of the company is to clean up various types of radioactive waste

2:41 a.m .: Heavy fighting and explosions at oil facilities in Ukraine

The Ukrainian armed forces are facing attacks by the Russian army “coming from all directions” in several places, according to reports published by several media on Sunday morning. The Russian military assault was met with “determined resistance”, the Ukrainian military said in a statement. In particular, Ukrainian forces reportedly repelled a Russian attack near Kharkiv.

A refinery was also hit by rockets and set on fire in a Kiev suburb, media reports.

In the south, at Kherson, Russian units reportedly managed to advance after heavy fighting.

Heavy fighting is also raging in the Luhansk region.

12:50 a.m.: Russia closes its airspace to Baltic and Slovenian companies

Russia announced on Sunday that it was closing its airspace to companies linked or registered in Latvia, Lithuania, Estonia and Slovenia, in retaliation for similar measures taken by these countries to sanction Moscow after the invasion of Ukraine. .

This ban will also apply to transit flights carried out in Russia by these companies, said in a press release the Russian civil aviation agency, Rosaviatsia.

The agency specifies that flights of Russian companies will continue to be made to the enclave of Kaliningrad, passing over international waters in the Baltic Sea and bypassing Lithuania.

On Saturday, Russia had already closed its airspace for planes linked to Bulgaria, Poland and the Czech Republic, after a similar decision taken by these countries against Russian companies.

Germany also wants to close its airspace to Russian planes following the invasion of Ukraine, a spokesman for the German transport ministry told AFP on Saturday.

On the same day at the end of the day, Austrian Airlines, the flag carrier of Austria, announced that it was canceling its flights to Russia and avoiding Russian airspace for at least the next seven days. Austrian Airlines took this decision “due to the evolution of the regulatory situation”, explained the company in a press release.

New blood test detects Alzheimer’s in the early stages, even before symptoms