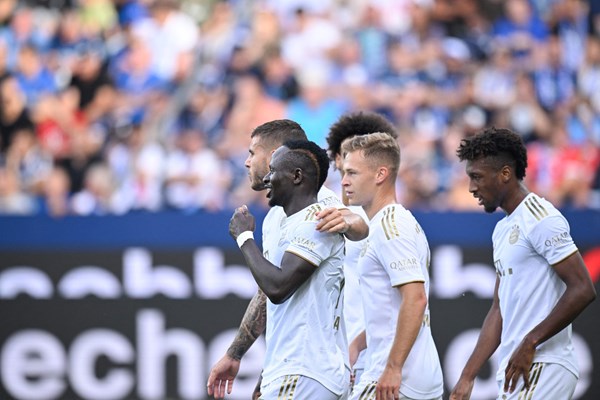 It is true that Bayern Munich has monopolized the German League title for ten consecutive seasons, and is a candidate for another crown this season, despite losing the efforts of its Polish top scorer Robert Lewandowski, but his next test scheduled “Saturday” at home will be a great challenge, not only because his guest offers a promising start to the season, but because Form a knot for the Bavarian club.
No team in the German League, during the period of Bayern’s monopoly on the title in the past ten seasons, achieved victories over the Bavarian club, as much as its next competitor, Borussia Moenchengladbach, who won nine matches against nine defeats and four draws.
Last season, in particular, was harsh for the Bavaria giants in the face of the green and white team, which is still striving to regain the glories of the seventies, when it won the title five times between 1970 and 1977, not because it fell at home in the league 1-2 and drew outside it 1-1, but because it Humiliated in the cup competition five clean in the second round.
New Monchengladbach coach Daniel Farke, who led Norwich City twice to the Premier League, said that facing Bayern “may be the biggest challenge in European football.”
He continued, “I do not think that Bayern is afraid of Gladbach,” considering that his team’s recent record against the Bavarian club may not be in his favour, because “you can’t buy anything with the successes of the past, but on the contrary, Bayern Munich will now be more vigilant.”
The American defender of Monchengladbach, Joe Scully, who scored his start in the German league last season against Bayern in particular, told AFP that the meetings with the Bavarian club constitute the most important moments of his team’s calendar.
“It is one of those matches that the players live for,” he said.
Although he scored 7 points from his first three matches and scored against his opponent in the last ten seasons, Mönchengladbach will be facing a very difficult task in light of the level presented by his team, coach Julian Nagelsmann, at the beginning of the season.
Bayern confirmed once again that it put behind him the loss of Lewandowski, who moved to Barcelona, ​​after he was crowned top scorer in the German League six times in the past seven seasons in the Bavarian club shirt, by achieving his third victory in a row and the second in a scoring festival by defeating his host Bochum 7-0 last Sunday.
After beginning the season with a sweeping win away from Eintracht Frankfurt 6-1, Bayern emerged victorious from its first appearance at home 2-0 at the expense of Wolfsburg, and then reviewed Sunday at the Bochum stadium, where it lost last season 2-4, with a sweeping victory that decided it in the half The first was with a 4-0 lead.
Bochum striker Simon Zoller summed up his team’s worst home defeat in 174 years of its history, saying, “They kicked our ass, I never felt so destroyed.”
Nagelsmann promised more from his team, telling DZN: “We’re not going to relax now, the energy in this team, the mood and the fact that everyone is giving their all, it hasn’t been the same for the past year, which makes us happy.”
Nagelsmann made adjustments to his squad for the first time this season due to the injury of Canadian Alfonso Davis and Jamal Musila, who scored three goals in two matches, giving Dutch newcomer Matthijs de Ligt his first start, while Frenchman Luca Hernandez moved to the left side of the defense line.
And played Leroy Sane instead of Davis and the French Kingsley Coman, while Serge Gnabry sat on the bench.
Nagelsmann was successful in his choice, as the three players who participated for the first time succeeded in the first three goals, through Sane, De Ligt and Koeman, before Senegalese newcomer Sadio Mane scored his second goal in the Bavarian shirt, then the third and Costa Rican Christian Gamboa sixth by mistake in his team’s goal. The alternative is Janabari VII.
With its third win in a row, Bayern regained the lead with nine points, two points ahead of Monchengladbach, Union Berlin and Mainz, who are facing each other in a row at this stage with Schalke and the injured Bayer Leverkusen, the third last season, who lost their first three matches.
After receiving its first defeat in the last stage at home against the return to the spotlight Werder Bremen 2-3, Borussia Dortmund, the runners-up, will visit the capital on Saturday to face Hertha Berlin, who have so far satisfied themselves with a point from three matches.
As for Leipzig, fourth last season, it will look for its first victory when it meets Saturday with its guest Wolfsburg seeking the same goal.

Details of the number of new cases of corona, recovery cases and deaths during the past 24 hours