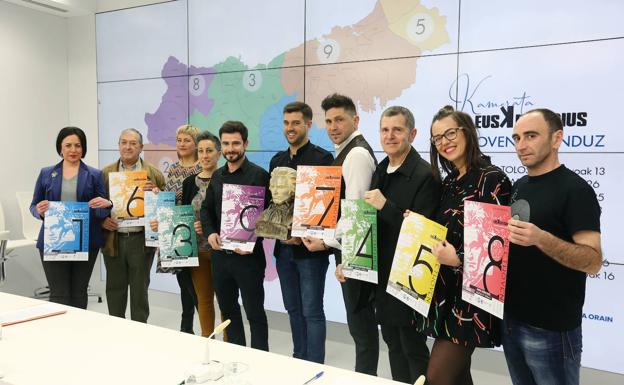 Beethoven Over the next few months, he will tour all the regions of Gipuzkoa with the help of Kamerata Euskdivarius, a young orchestra that will perform the nine symphonies of the German composer in as many municipalities in the territory. The ‘tour’ was going to start tomorrow in Toulouse with a concert that has been canceled as a preventive measure against the coronavirus, and it is expected to continue over the next few months with stops in Beasain, Arrasate, Zarautz, Deba, Irun, Bergara, Zumarraga and San Sebastián. The initiative seeks to bring the German genius closer to the Gipuzkoan population on the 250th anniversary of his birth.

Harkaitz Millán, provincial deputy for Culture, and representatives of the municipalities that will host the concerts have presented this morning at the Provincial Palace a program that has a strong pedagogical charge. “It is not just about going to a venue to listen to a concert, we are going to try to contextualize each one of the symphonies in the historical moment in which they were composed and relate it to what was happening then in the towns we are going to visit,” he announced. Arkaitz Mendoza, director of Kamerata Euskdivarius. The recently created group faces the challenge with “enthusiasm and energy” and also with the responsibility of transmitting to the Gipuzkoan public the true spirit of the music of the German genius. “For us it is a challenge, but I think we have the baggage and enough technique to do it ”, indicated the person in charge of the orchestra.

The deputy for Culture, in turn, has emphasized the importance of a figure like Beethoven in universal music and in the need to bring it closer to Gipuzkoan society. “The 250th anniversary of his birth is a great opportunity to get closer to the work of one of the great geniuses of music and make it known throughout Gipuzkoa, especially among the youngest.” The concerts will be preceded by an explanation given by the director of Kamerata Euskdivarius, who has been the one who has planned the ‘tour’ depending on the circumstances of each symphony and each municipality. “We made a selection of municipalities based on a historical connection and then we have been fitting each symphony into the towns that had the opportunity to collaborate,” said Mendoza.

Kamerata Euskdivarius is a young group that combines musicians fresh from Musikene’s classrooms with long-term professionals. It is an orchestra that marks distances with the most conventional classical music formations: «We are neither dressed in black nor do we usually sit at concerts», Pointed out its director, who has indicated that they are also supporters of unconventional scenarios. This will, for example, make some of the concerts take place in a park (Arrasate), a pediment (Irun) and even in an architectural jewel such as that of the hermitage of La Antigua (Zumarraga).

The initiative joins the integrals that Donostia Musika It has programmed since January at the Victoria Eugenia on the occasion of the anniversary of Beethoven’s birth and also at those celebrated in all the countries of the planet in memory of the most universal of composers.

do we take a risk by going to vote in the municipal elections?