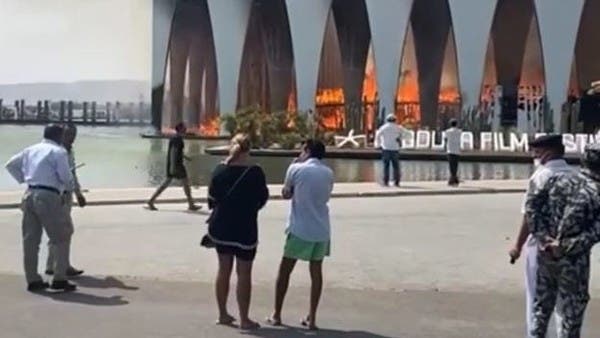 Engineer Samih Sawiris, founder of El Gouna, revealed the scenes of what happened in the Plaza Theater fire, which hosts the opening and closing ceremonies of the film festival.

Sawiris was at the site of the fire after it was controlled by the civil protection forces, and confirmed that a short circuit in the outdoor unit was what caused the fire.

Samih Sawiris explained that everything that happened due to the fire is being addressed, and on the scheduled start of the opening ceremony, no one will feel that there was any fire yesterday.

He stressed that the simple modification that will be made to the ceremony, which will be launched after the opening of the festival, is to be in a shallow place instead of the upper place that was affected by the fire.

The fifth edition of the film festival will start on Thursday evening, and the activities will continue until the twenty-second of October.

A huge fire broke out today, Wednesday, in the main hall designated for holding the El Gouna Film Festival, hours before its start tomorrow, Thursday.

The Egyptian authorities received a report that a large fire broke out inside the hall, where the opening ceremony of the El Gouna Film Festival will be held tomorrow, while ambulances and civil protection rushed to the site of the accident to control and extinguish the fire.

management was El Gouna International Film Festival It announced the launch of its fifth edition, tomorrow, Thursday, in the presence of a large number of stars. The festival presents the most prominent works and films of this year and honors a number of artists.